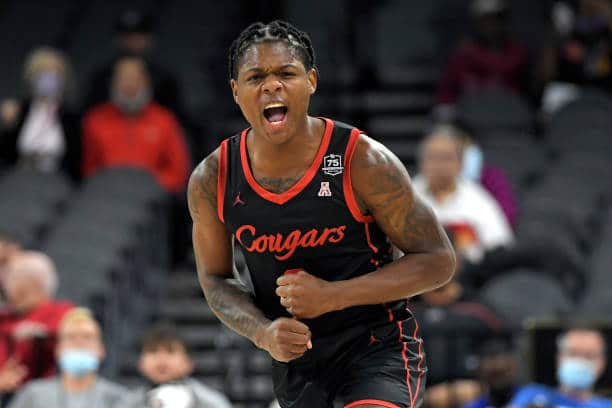 As players continue to make their decisions on the NBA Draft and transfer portal, Mat Mlodzinski releases his new way-too-early college basketball rankings for 2022-23.

I had UNC as my way-too-early number one right when the season ended. Now that they officially will return Armando Bacot, Caleb Love, Leaky Black, and R.J. Davis, it’s even more solidified. The Tar Heels have a solid chance at making it back to the national championship.

All aboard the Houston train! The Cougars surprised just about everyone, as they continued to run through the AAC after losing Marcus Sasser and Tramon Mark to season-ending injuries. At full health, they were a Final Four team last year. Now, they’ll run it back and add a top 10 rated recruit in Jarace Walker. The pieces are all there.

Eric Musselman is arguably a top-five coach in college basketball and will have one of the most talented rosters in the country next season that includes five-stars Anthony Black, Jordan Walsh, and Nick Smith. That alone is scary food for thought. And if Jaylin Williams returns, it gives the Razorbacks another massive asset.

With Sahvir Wheeler and Oscar Tshiebwe back, there’s no reason to dispute Kentucky as a contender to win the SEC. Antonio Reeves also comes in from Illinois State where he averaged 20.1 points per game last season. It’s going to be one of the oldest and most experienced Wildcats team in recent memory and I really like those odds.

The biggest question mark for Duke heading into next season will be the transition from Mike Krzyzewski to Jon Scheyer. Aside from that, it looks like another potential Final Four team on paper. Four five-stars make up the best recruiting class in 2022. Jeremy Roach is also primed for big things as the starting point guard.

With Johnny Juzang off to the NBA, it puts a bit more pressure on Amari Bailey Jr. to be a factor right away. The Bruins certainly still have experience with Tyger Campbell and Jaime Jaquez Jr., so a Final Four run isn’t even close to out of the possibilities.

I was originally fading Baylor out of the top ten due to the losses of James Akinjo, Jeremy Sochan, Kendall Brown, and Matthew Mayer. That’s fairly substantial. However, Adam Flagler, Flo Thamba, Keyontae George, and LJ Cryer are more than capable of stepping up into new roles. The addition of Caleb Lohner from BYU is also an underrated pickup.

Parting ways with Christian Braun, David McCormack, Ochai Agbaji, and Remy Martin made it tough for me to put Kansas into my original top five. Now, Jalen Wilson’s NBA Draft stock is rising. A 247sports top-five recruiting class will keep the Jayhawks relevant all season long, but losing so many pieces won’t be easy to defend a Final Four run.

Michigan didn’t live up to the pre-season expectations handed to them last season, but they’ll get another chance. They just round out my way-too-early 2022-23 college basketball rankings due to the return of feared big man Hunter Dickinson. Caleb Houstan and Moussa Diabate are also key players running it back and Princeton transfer Jaelin Llewellyn adds some scoring depth. Plus, who doesn’t want to see Juwan Howard’s son and Carmelo Anthony actor, Jett Howard, put U of M back in position to make a deep run in March?

Replacing a player like Jabari Smith is nearly impossible, but Bruce Pearl did his best, adding Johni Broome from Morehead State. Broome, a coveted transfer, averaged 16.8 points and 10.5 rebounds last season and will give the Tigers a big body to compete in a raucous SEC. Wendell Green and KD Johnson could also form one of the best backcourts in the country, so the only things stopping Auburn from a Final Four run are themselves and the toughest conference in the country.

The highlight of Alabama is having the number three recruiting class in the country. Charles Bediako and Noah Gurley also give Nate Oats and the Crimson Tide some frontcourt pieces. However, with Jahvon Quinerly potentially out for the start of next season, the backcourt could take a big hit initially. Mark Sears does come in from Ohio where he led the Bobcats in scoring a season ago. I saw him play live against Buffalo and can tell you that he’s the real deal.

Ben Mathurin and Christian Koloko are two massive losses as they were core pieces of the Arizona unit that earned a 1-seed in the NCAA Tournament. However, Azuolas Tubelis, Dalen Terry, and Kerr Kriisa are back, among others, which means the Wildcats still have plenty of leftover talent from last year’s super team. In a Pac-12 that doesn’t look like a big challenge other than UCLA and Oregon, Tommy Lloyd’s squad will be right in the mix.

Regardless of Drew Timme’s draft decision, adding LSU transfer Efton Reid solved an aching problem for Gonzaga. They’ll have a dominant big man whatever the case is, to go along with a backcourt filled with talent. The biggest problem is the inexperience of that talent, but Mark Few’s been around the block enough to not discredit or shy away from what he can accomplish.

I don’t know how I slept on Texas Tech the first go-around but I’m glad somebody woke me up. De’Vion Harmon, Fardaws Aimaq, and Kevin Obanor are as good a trio as anyone in the country. Aimaq especially can be a force in the Big 12. It’s a transfer-heavy team, but Mark Adams had us all wowed after his coaching job last season. I say he can do it again.

The Billikens are set to return Francis Okoro, Fred Thatch Jr., Gibson Jimmerson, Javonte Perkins, Terrence Hargrove Jr., and Yuri Collins. Together, they combined for over 70 points per game last season. Collins is also one of the most gifted passers in the country. Javon Pickett comes over from Missouri to solidify this group even more.

Mike Miles was expected to leave, but then he switched course, coming back to TCU. A round of 32 team a year ago, the Horned Frogs were inches away from upsetting Arizona and heading to the second weekend. But don’t just get lost in Miles returning – TCU returns its top six scorers. Jaime Dixon and the Horned Frogs are easily the most underrated team in the Big 12.

With Ethan Anderson teaming up with Graham Ike and Hunter Maldonado, I’m all over this Wyoming team. The Cowboys were dangerous last year, but bring back their star duo and add another viable option in the Mountain West. Wyoming is in the discussion as the best mid-major, right there with Gonzaga and Saint Louis.

It seems like Trayce Jackson-Davis could make his way back to the Hoosiers, as the NBA Combine 5v5 scrimmages didn’t list his name. Of course, nothing’s official until it’s official, but that’s a good sign if you’re a Hoosiers fan. Miller Kopp, Race Thompson, and Xavier Johnson form a nice group of veterans who are running it back.

With Kennedy Chandler off to pursue his NBA dreams, it shifts the Vols back a notch. In an SEC that looks on track to be the best conference in college basketball, Tennessee falls just short of the top tier. The backcourt of Santiago Vescovi and Zakai Zeigler is still steady and five-star recruit Julian Phillips is no slouch. But the competition ahead of them is just that stiff.

I wrote about how Darrion Trammell would fit with San Diego State the moment he committed, transferring from Seattle U. He can fill a gap the Aztecs were lacking in the scoring department. Of course, Matt Bradley is a scorer in himself. Now that the Aztecs have two buckets, watch out.

Shaka Smart had a very good season in year one, culminating in an AP Poll high ranking of 18 and four wins over top-25 opponents. It didn’t end well with a blowout loss to North Carolina. However, we saw what the Tar Heels were made of and this was a young Golden Eagles group that will only get better. It also all depends on Justin Lewis. If he chooses the NBA route, Marquette falls out of these rankings.

Losing De’Vion Harmon is a big reason for why Oregon is this low. But N’Faly Dante and Quincy Guerrier form an experienced and talented frontcourt. Dior Johnson is box office and isn’t even the Ducks’ top-rated recruit. That’s Kel’el Ware, another big man. They may need some time to gel together, but talent-wise, Oregon’s the cream of the crop.

Nabbing Sean Miller out of the coaching portal should be enough to help the Musketeers into a solid Big East finish this season. Losing Dwon Odom was big, but Jack Nunge and Zach Freemantle are primed for big things out of Cincinnati next season. Don’t sleep on Souley Boum either, a UTEP transfer who averaged a touch under 20 a game last year.

With Christian Bishop, Marcus Carr, and Timmy Allen back, the Longhorns are destined to at least finish in the top half of the Big 12. However, I’m more excited about Sir’Jabari Rice coming into Chris Beard’s system after four winning seasons with New Mexico State. With that being said, I’m still treading lightly on Texas, given what’s happened after high expectations the past couple of years.