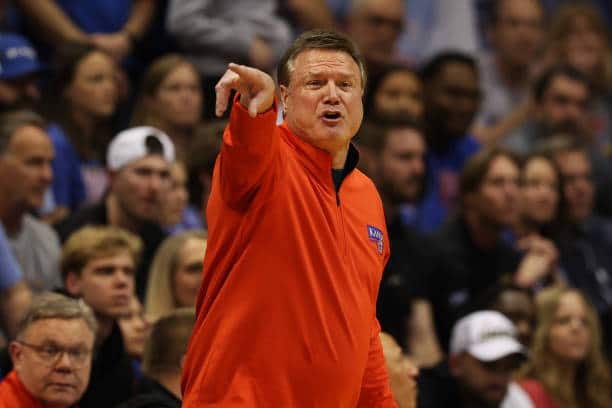 Now with two national championships, where does Bill Self rank among the best college basketball coaches of all time?

Jim Boeheim, Lute Olson, Jerry Tarkanian, and John Thompson all have just one national title. Cutting down the nets once isn’t easy, and the feat becomes even more incredible once it’s done a second time.

Bill Self will forever go down in Kansas lore as the only Jayhawks head coach to hoist two national championship trophies. He’s still got some coaching years ahead of him, but this latest title is significant. Whether or not Self should be considered one of the top college basketball coaches of all time is no longer a reputable question. Instead, where Self ranks among the game’s all-time elite is the question at hand.

“Huggy Bear” is in Eddie Sutton territory as one of the best college basketball coaches to never win an NCAA Championship. He’s running out of time, but it certainly won’t diminish his legacy of Huggins never does win a title.

Tarkanian was a revolutionary coach who holds one of the best all-time winning percentages among his peers. He got UNLV to national prominence, which should earn some bonus points.

Phog Allen is as associated with Kansas as anyone, which is saying something considering the long list of coaches and players who have made their mark with the Jayhawks. He may be an old-timer, but his contributions to the game are easy to see, hence Allen Fieldhouse.

Izzo is a wizard in March, helping the Spartans to eight Final Fours. However, he has just one natty to show for it and surprisingly hasn’t hit 700 wins yet. That’s no knock on his coaching, but in a numbers game, he lacks in certain places.

Louisville’s had some legendary college basketball coaches and Crum is at the top of that list. He won a pair of titles with the Cardinals, where he spent his entire head coaching career.

The knock on Coach Cal is his lone championship, despite almost yearly coaching the Wildcats to 25 wins and rostering handfuls of NBA talent. However, it’s not easy to get one-and-done players to gel together that quickly, yet Calipari almost always gets the most out of his guys. It just might not always end in a title.

Sutton is the best college basketball coach to never win a national championship. He reached three Final Fours and is one of only 12 coaches with over 800 career wins. Had he cut down the nets once, there’s an argument to have Sutton inside the top ten all-time.

Lute Olson is still one of the greatest west-coast college basketball coaches of all-time, practically gliding by the old Pac-10 with Arizona. From 1987-88 to his retirement in 2007, Arizona never won less than 20 games in a season, a remarkable achievement and nod to his sustainability in Tucson.

Here’s the man of the hour! After capturing his second national championship, Bill Self makes the top dozen. He’s new to the bunch, but still has room to move up, even if the 2022 title is his last. Self has a legitimate chance to reach 1,000 career wins and should at least hit another Final Four or two before he calls it quits.

Pitino stays above Self for the moment, given he has an additional three Final Four appearances. Now with Iona, Pitino is showing is greatness, putting the Gaels on the map as one of the best teams in mid-major hoops.

The first thing that comes to mind about John Thompson was his leadership to help grow the game as the greatest Black head coach in college basketball history. A trio of Final Fours and one championship also show what “Big John” was all about.

The biggest letdown for Jim Boeheim is only being able to have one national championship to his name, despite five Final Fours and coaching for 40+ years. But don’t get it twisted. Boeheim’s impact on the game is as much as any, especially when you add on his service as a Team USA Basketball assistant. Oh, and by NCAA rules, he’s on the verge of hitting 1,000 wins TWICE.

Wright retires unexpectedly in April, so it’s also a perfect time to see where he stands. He’s a case where you have to throw the 642 wins out the window – plenty of coaches on here will have more, but Wright retired at least five years earlier than you’d expect. Given that, he was on track for somewhere in the ballpark of 750 career wins at the bare minimum. But two chips and dominating the revamped Big East helped lift Wright into the top ten.

I promise I’m almost done with this stretch of Big East pride! Jim Calhoun leads the pack because there’s not one part about his resume that you can argue against. He’s got the nearly 900 career wins to his name. Three championships and four Final Fours also speak for themselves. The winning percentage may be a tad low, but lets not get too picky.

Roy Williams had as good of two runs as any coach ever had that spent valuable time with multiple programs. Obviously, he never won a championship with Kansas, but Williams helped lead them to four Final Fours.

Rupp is to this day the greatest coach in Kentucky Wildcats basketball history. That in itself is as good an achievement as one can get. He was one championship short of a handful of rings, reaching six Final Fours in the process.

Bobby Knight’s fire, passion, and at times, over-the-top tantrums are of course what most people remember him for. Of course, Indiana fans will remember Knight for the trio of titles he helped win with the Hoosiers. It would take a lot to move Knight out of the Mount Rushmore of college basketball coaches.

It’s actually difficult to debate Roy Williams and Dean Smith, given the former did have a really good recent run with the Tar Heels. But 11 runs to the Final Four during a time when college basketball was really hitting its stride is what puts Smith on this level.

Some would argue John Wooden is the greatest coach of all time, but it’s difficult to say that given the time period. Wooden’s last Final Four appearance came only five years before Smith got his fifth. Sure, there was overlap, but the majority of Wooden’s coaching career did come during the early 1960s and into the 1970s. Either way you put it, what he did with UCLA will never be done again.

Coach K reached a level that is so tough to reach in this day in age. Despite the parity in college hoops, Krzyzewski helped lead the Blue Devils to 13 Final Fours – more than any coach in the history of the game. The five championships are also more modern-day, and of course, he’s the winningest coach of all time. No one on this current list has a chance to dethrone Coach K.