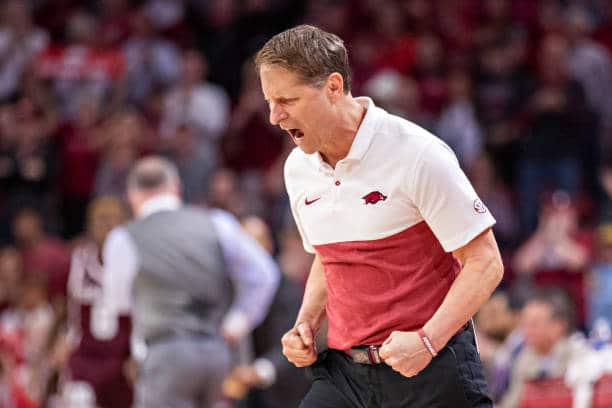 These college basketball coaches have mastered recruiting, mentoring, and winning at a high level.

Creighton is the early pick to win the Big East in 2023 and you can thank coach McDermott for tremendous recruiting and a unique approach to the game. If you like to score the basketball, then Creighton’s right for you.

It’s still remarkable to think of how Shaheen Holloway got little ole’ Saint Peter’s from Jersey City to the Elite Eight but that actually happened at now he’s at his dream school. The Pirates are pumped – and should be – to have Sha back in town and with the job he’s done in the transfer portal so far, they’re looking at another trip back to the field of 68.

There may not be a more likable college basketball coach, but Bob Huggins has somehow become just that. You know what you’re getting with Huggy Bear and it usually includes winning seasons (let’s just forget about last year why don’t we)?

Last year was not Juwan Howard’s year. After being ranked 6th to begin the season in the AP Poll, Michigan tumbled out of the rankings and barely squeaked into the NCAA Tournament. A trip to the Sweet 16 showed Howard’s ability to not totally let things crash and burn, so with the Wolverines expected to compete for a Big Ten title in 2023, the pressure is on Howard to perform better in the regular season.

33-4 in your first year as a head coach is absolutely remarkable. The Wildcats were loaded last year so I’m sure it’ll be year two where we can really get a grasp on who Lloyd is as a coach. Arizona’s still flooded with talent, so I’d expect more big things, but eyes will be on Lloyd in Tucson to see what he’s made of.

Rick Barnes doesn’t often pop up on the lists of the best active coaches, but he’s transformed the Vols back into a proud program in the SEC. Tennessee has high expectations every year and Barnes continues to deliver. He’s just waiting on a championship at this point.

There’s no coach on this list with more wins than Jim Boeheim, but there’s also no coach who’s been asked to step down as many times as Boeheim. Heading into his 47th year as head coach of the Orange, the Syracuse stock has seemingly dipped down since their most recent Final Four in 2016. But there’s a certain respect you need to have for legends and Boeheim deserves that with no questions asked.

Seton Hall is arguably the hardest place to recruit to in power six college basketball, yet Willard made them into a yearly NCAA Tournament team at the end of his time in South Orange. Now, he takes to College Park to try and get Maryland back in business in the Big Ten. Willard’s also still just 47 years old, so his experience mixed with his youth relative to the majority of big-name college basketball coaches are two notable factors.

The longer Pitino stays at Iona, the better the Gaels are going to continue to get. You don’t just hire one of the greatest coaches of all time and not expect to be turned into something special. Sure, Iona won’t get the same type of coverage as the big-name schools, but Pitino’s status alone has very quickly made them a mid-major powerhouse.

Jamie Dixon was on a roll with Pitt but chose to go back home to TCU. I got the sense people forgot about his coaching abilities and were reminded of them when the Horned Frogs steamrolled Seton Hall and game within inches of upsetting Arizona to advance to the Sweet 16. TCU’s got the team to compete at the top of the Big 12 next year which deserves a round of applause in that conference.

The Ducks had lofty expectations at the beginning of last season, with arguably the top transfer class in the nation. They fell very short of those, and are big sleepers heading into next season. Altman is one reason to bet that they won’t have two iffy seasons in a row. If you asked me who the best college basketball coaches without a national championship are, without hesitation I’d name Dana Altman as one of them.

It still doesn’t seem real, but Jay Wright is no longer a coach in the Big East. While I’m not sure anyone can replace him as the top coach in the conference, I’m willing to go with Ed Cooley for now. I might’ve gone with Kevin Willard before he departed to Maryland, but Cooley would’ve been close either way. I’m not sure who needs to know this, but Providence isn’t the easiest place to recruit, yet Cooley’s overcome those challenges.

Matt Painter often gets knocked for Purdue’s inability to finish great seasons in the NCAA Tournament. I think that’s a fair assessment, but it shouldn’t all get in the way of Painter’s tremendous job well-done in West Lafayette.

You can’t beat a national championship appearance in year one, but that’s exactly what Hubert Davis did, replacing Roy Williams at the helm of the Tar Heels program. UNC is my way-too-early number one for next season, so even though Davis is so new to his head coaching career, he’s already one of the top names in the game.

It’s hard to believe Pearl, who previously coached at Tennessee, has now been coaching in the SEC for 15 seasons. One of the most passionate coaches there is, Pearl got Auburn to as high as number one in the AP Poll last season and has another talented Tigers team heading into 2022-23.

In three years with Alabama, Oats has done about what we expected – make NCAA Tournaments. He’s led the Crimson Tide to the past two but did have some struggles last season, falling one win short of 20 for the season.

Cronin was always an underrated coach at Cincinnati for whatever reason. Now, he’s beginning to get UCLA back on the come up and has strengthened his overall resume in the process. Cronin has the perfect blend of recruiting and in-game adjustments and has the Bruins in position to be near the top of the Pac 12 again.

Izzo is another difficult coach to rank, given his status as an all-time great. However, like most things, it’s out with the old and in with the new. For Izzo, that just means there are some younger minds ready to take over the sport. But if he can lead the Spartans to a ninth Final Four, we all know who the big dawg is.

Kelvin Sampson has totally revitalized his career after an ugly fallout at Indiana. In Sampson’s first year at Houston, the Cougars won 13 games. Nine years later and they’re a Final Four contender for a third straight year, after making it in 2021. The future Big 12 program couldn’t have a better man leading the way right now.

Why do I have coach Cal at sixth after losing to 15-seed Saint Peter’s in the first round of the NCAA Tournament last March? Because he’s still one of, if not the best recruiter in the game. The Kentucky Wildcats are yet again a preseason favorite to cut down the nets in April.

Musselman tops my list of the top college basketball coaches who are set to take over for years to come. In an SEC conference with so many great coaches, Musselman’s recruiting and leadership are top-notch. It’s only a matter of time until he leads the Razorbacks to a Final Four and with the team they have this year, it might be as early as 2023.

Mark Few may not have a championship but should be considered in the same tier as the active college basketball coaches who have been fortunate enough to win the title. Gonzaga was once America’s Cinderella, but now college basketball fans wonder if the most dominant program out west over the past decade and a half will ever win the Big Dance. The clock’s ticking, but it shouldn’t diminish all of Few’s accomplishments with that program.

Virginia may have missed the 2022 NCAA Tournament but it shouldn’t diminish Bennett as a coach. He continuously does more with less and has a recent championship to show for it. With Mike Krzyzewski and Roy Williams now both out of the ACC, Bennett is the cream of the crop in the conference.

Scott Drew has built Baylor into a yearly contender, winning the national championship in 2021. I thought the Bears would take a step back. They proved me wrong and for that, I have to give Drew his laurels. The Big 12 is in good hands.

The only active college basketball coach with multiple (official) national championships, Bill Self is officially in a category all by himself. Sure, there are coaches on here who also know how to win in March, but cutting the nets down twice is a tall task. Self is looking for more hardware to keep climbing among the all-time greats.