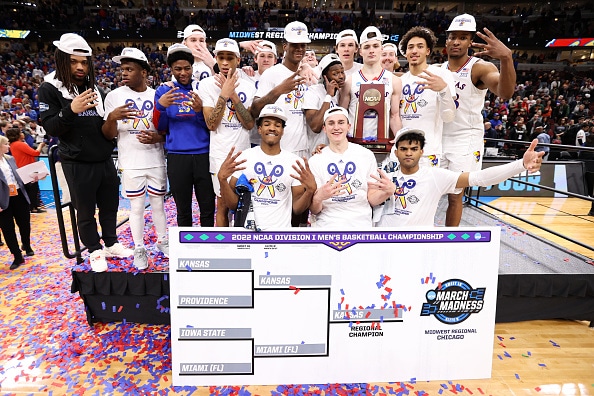 And then there were four.

Kansas vs Villanova, two of the most dominant teams in college basketball this century face each other in the Final Four once again. Kansas is looking to get revenge after getting demolished in 2018 by this Villanova team. Both teams had pretty similar paths to get here, with neither team having to play better than a four seed, but still beat some quality teams along the way.

It will be no easy task for either team to win this game, but let’s dive into three ways both teams can win in what will be an exciting matchup of Kansas vs Villanova.

To view the three keys to win for the second Final Four game, Duke vs UNC, click here.

1. Be aggressive and get to the line

In general, Villanova plays a small rotation of about six players. Now, with Justin Moore being out for the season after suffering a heartbreaking injury against Houston, the depth decreases even more. That’s why Kansas should make it a priority to be as aggressive as possible and draw fouls. If one of Villanova’s guys gets into foul trouble, the rotation gets even smaller, and Villanova might not have enough talent at that point to overcome the Jayhawks.

It looks like Eric Dixon is slated to guard David McCormack, and at 6’10, McCormack has a clear size advantage over the 6’8 Dixon. McCormack needs to be able to bully him down low and control the paint. McCormack did a really great job of it against Miami, but really struggled against Creighton when he had a clear advantage. As long as he and Mitch Lightfoot, who plays taller than 6’8, can establish a post presence, it will make Villanova’s lives much trickier.

3. Bring in Remy right as the offense slows down

Everyone who has watched Kansas’ path to the Final 4 knows that Remy Martin has been a key reason for their success. From being the biggest transfer disappointment to the Midwest Regional Most Outstanding Player, Martin has been the difference-maker time and time again. Remy comes off the bench, so it will be extremely important to find the perfect time to get that first sub in.

Right when either Villanova goes on a run or the shots stop falling for a minute or two, Coach Self should run to the bench and put Martin in. Villanova doesn’t make a lot of mistakes, so keeping their foot on the gas is going to be a must for Kansas, and Remy Martin is how they can do that.

1. Utilize the pick and pop

One key trend that I noticed while watching the Kansas games was that teams would utilize the pick and pop on David McCormack, and instead of following the center to the three-point line, McCormack would normally stay in the paint and leave the open three as an option. This really hurt Kansas against Creighton because they were able to knock down those shots, while it helped them against Miami because they missed the open ones. Dixon, who will take that role shoots 51.5% from three, so if Villanova can force that action and get Dixon open threes repeatedly, that could lead to the optimal result.

Expect this game to be very physical, because both teams want to get to the line for different reasons. I mentioned Kansas’ reason earlier, but for Villanova, it’s because they are statistically the best free-throw shooting team of all time. If they get free throws, they’re going to make them, and every point matters in a game of this magnitude.

3. Play at their tempo

According to everyone’s favorite analytical tool KenPom, Villanova plays at the 345th fastest tempo of 358 teams. Kansas on the other hand is 61st. If Villanova can slow down the game, take smart shots, and limit transition, they can take control of this game from the start and really hinder Kansas’ chances of establishing themselves. This will be extremely crucial in the late game because if Villanova is up and the foul game is being played, they’re not going to miss their free throws.

Kansas vs Villanova starts Saturday at 6:09 PM ET on TBS.

One thought on “Kansas vs Villanova: Three Keys To Win”