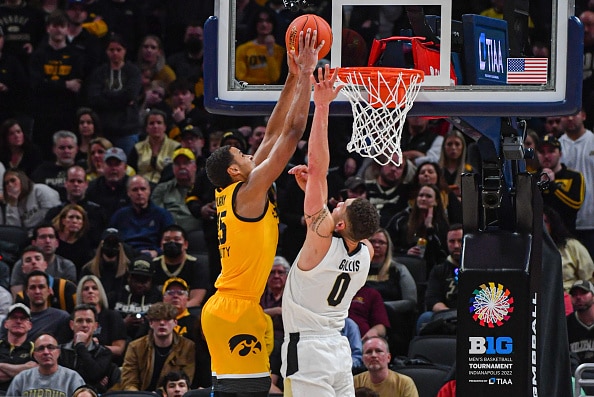 CBB Review hands out awards for each conference tournament in 2022. Up next: The Big Ten Tournament.

Keegan Murray was outstanding, averaging over 25 points a contest in the tournament. The Hawkeyes battled Indiana to the buzzer in the semifinal, as Jordan Bohannon knocked down a prayer three-pointer to win the game and send his team to the championship, where they handled business and upset Purdue.

The Big Ten first-teamer did not disappoint in his team’s run, averaging 25.8 points to dominate the rest of a solid conference. Murray dominated, hitting over 50% of his shots and getting to the line at a high clip throughout the tournament.

Murray’s best game came in the semifinal against Indiana, where he knocked in 32 points on 8-of-10 three-pointers. That clip is simply unstoppable, which is exactly what Murray was all tournament long.

Reasons why the Big Ten tournament is awesome: we can predict Iowa’s path with full knowledge of who they will face off with. Iowa faces off with a red hot Richmond squad to open up the tournament and then likely Providence. The Hawkeyes are red hot and should not have an issue taking care of business against teams with a much lower regular season SOS.

In the Sweet 16, Iowa faces off with Kansas, and the line will end there for them. Kansas is the much better team and is a matchup nightmare for the Hawkeyes. Nonetheless, it was an incredible run for Iowa.