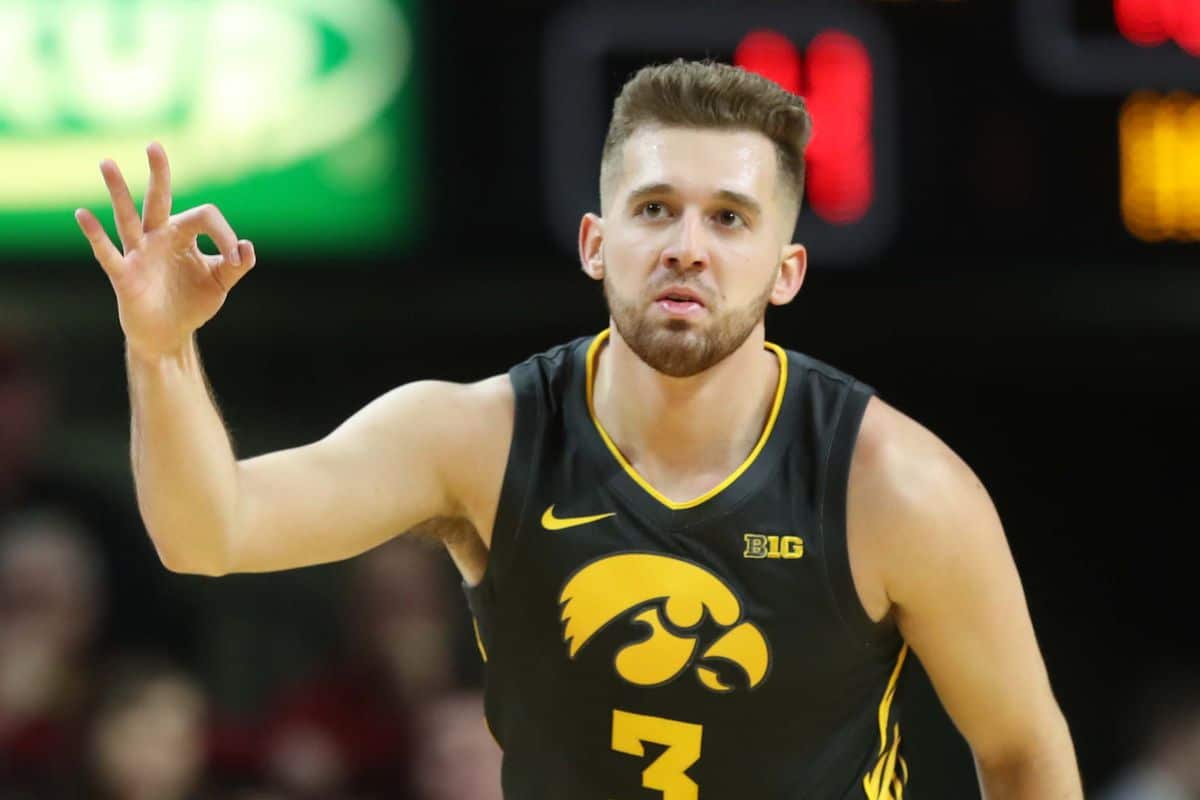 Iowa basketball will have super-senior Jordan Bohannon back to help calm the storm as Luka Garza is out of town.

Perhaps no team in college basketball will have as big a change as the Hawkeyes who no longer have Luka Garza. Iowa basketball still has plenty of talent to put together a winning team, but production will shift to the onslaught of guards.

Bohannon has been a part of Iowa basketball since the 2016-17 season and will go down as one of the most loyal and fan-favorite Hawkeyes of all time. This year, in what is virtually a re-tuning year, Bohannon will have to become more of a central focus to the Iowa offense. There is no dominant center waiting to fill Luka Garza’s shoes, so coach McCaffery will rely on his super senior to create offense.

Bohannon has always been a solid wingman and leader of the Iowa offense, but now he’ll have to take it in his own hands. He won’t need to equal Garza’s production. That request would be bogus. Bohannon will simply have to take more shots and put his all into keeping Iowa in games.

I hate putting this much on a transfer, but Rebraca’s role will determine a lot for this Iowa basketball team. At North Dakota State, he was a capable inside post presence who was a matchup nightmare on the perimeter. That will fit in nicely in Iowa City, but his toughness could determine whether he’s asked to play the four or the five position.

Riley Mulvey has the body type to start at the center, but it’s a lot to ask a freshman to come in and take a job previously held by Garza. I believe Rebraca can help Mulvey grow, but he’s going to have to play extra physical as Mulvey gets used to the collegiate game. It might hurt Rebraca’s natural position because he’s going to be asked to do a lot as Mulvey develops.

I’m really not a huge fan of what Iowa basketball is going to bring off its’ bench. No matter what the actual starting lineup is, there will only be two solid players to come in and give the starters some rest. In my projected rotation, that would be Toussaint and Patrick McCafferey.

McCaffery can play a few positions as a good rebounder and outside shooter. Meanwhile, Toussaint is the best bench option that boasts a slew of guards ready to come in for relief. However, after then, it’s a drop-off that’ll feature unproven sophomores and a few unnamed freshmen. Iowa basketball lost a lot of good players last year, so I bet one of these guys can blossom into a really good bench player. However, right now, it’s one big guess.

Why don’t we look at Adjusted Offense and how much it might change as Iowa basketball goes on to life without Garza.

The Hawkeyes were third in the country in AdjO last season, but without an efficient and offensive rebounder in Garza, the number of possessions the Hawkeyes will have is sure to drastically change. The pace of play without Joe Wieskamp and CJ Frederick will also make a difference.

I’ll be interested to see if coach McCaffery decides to switch up his offensive philosophy. Iowa hasn’t been ranked below the top 25 in AdjO since 2017, but this year might be the year they slide back down a little.

I’ve always been a fan of what the Hawkeyes are able to do by putting up a lot of 3-star and few 4-star recruits against the rest of the Big Ten. However, year after year they get it done, so I’m not about to say that Iowa is done for without Garza.

It’ll certainly be a learning curve for the returning players on the team, but there’s still enough talent, a rising sophomore in Keegan Murray and one heck of a head coach to get it done.

Iowa has a light schedule, with Virginia, Iowa State and Utah State as the three most important non-conference matchups. However, that won’t’ matter for an NCAA Tournament resume with the Big Ten providing more than enough quadrant one opportunities.

At the end of the year, I see Iowa as a team that’ll be in around an 8-12 seed. They’re sure to knock off a few top-25 teams, but there will be struggles as well. It’s a team that you have to bring your A-game against.