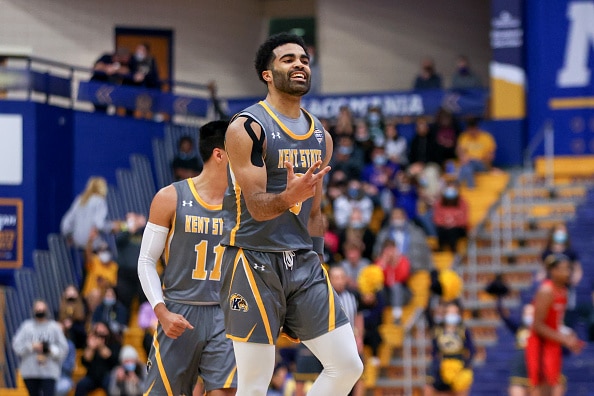 CBB Review highlights the ins and outs of every conference tournament leading up to Selection Sunday. Up next: The MAC Tournament.

The MAC looked like it was going to be a two-team race between Toledo and Ohio as the conference season went on. However, Kent State went on a tear, winning 12 in a row to end the season. That’s the nation’s fourth-longest active winning streak, making the Golden Flashes the hottest team coming in. This league is one of the best mid-major conferences every season, so expect plenty of quality basketball in Cleveland.

The MAC is full of explosive scorers, with four guys averaging just a shade under 20 points per game. Rollins, Sears, and Williams are three of those guys, while Sincere Carry was just under 19 a game on his way to the league’s Player of the Year honor. Rollins also finished in the top 10 in assists and steals per game. Sears broke out and filled the shoes of Jason Preston for Ohio.

Carry, a transfer from Duquesne, leads the way for the Golden Flashes. On top of scoring, he can dish the ball out at 4.8 assists per game. Williams is the floor general for Buffalo and is their go-to guy in clutch situations. Finally, Freeman led the MAC with 11 rebounds per game, and his defensive presence earned him the conference’s top honor in that category.

Buffalo was the pre-season pick in the MAC, with many believing the duo of Williams and Josh Mballa would be a tough pill to swallow. Both of those players certainly played at a high level, while Ronaldo Segu emerged as a guiding force at the point guard position. The Bulls went on a hot streak until the last two games of the season, so the potential for a hangover is there. Still, there’s a reason this squad was picked first at the beginning of the year, so it’s not out of the question that they can find their rhythm at the right time.

The Rockets were the most consistent team this season and captured their second-straight regular-season title. They swept Central Michigan, though the Chippewas only lost by two the second time around. Expect Toledo to motivated to show they can get over the hump this season and earn the victory here.

Both of these teams have what it takes to make a surprise run to a tournament title. Akron won the only meeting between these two, but that was back on New Year’s Day. The Zips are also riding a five-game winning streak. However, Buffalo, behind Jeenathan Williams, gets the job done in what should be a great game.

Kent State beat Miami by 13 back on February 1st, making the RedHawks one of many victims on this long winning streak. The run doesn’t stop here, with the Golden Flashes getting yet another victory into the semifinals.

Ohio beat Ball State by 24, also back on February 1st, in the teams’ only meeting this season. Ohio ended the season on a three-game losing streak, taking them out of the running for a MAC title split. The Bobcats right the ship in this one.

Toledo just beat Buffalo by 16 back on March 1st, and took both games on the season overall. The Rockets seem like a team on a mission, and they won’t let a pesky Buffalo squad stop them here. Toledo advances.

Kent State dismantled Ohio by 23 in their most recent game two weeks ago, but Ohio did get the better of Kent State in early January. Momentum is king in conference tournaments, though, and the Golden Flashes have that edge. Kent State gets to the title game.

The old adage says that it’s tough to beat a team three times in the same season, but that’s what Kent State will be looking to do to Toledo in this game. This will be fantastic match-up that should come down to the wire. When it’s all said and done, I’m going to continue to ride the hot hand. Kent State gets it done, putting its first round opponent on notice in the process.

One thought on “2022 MAC Tournament Preview”