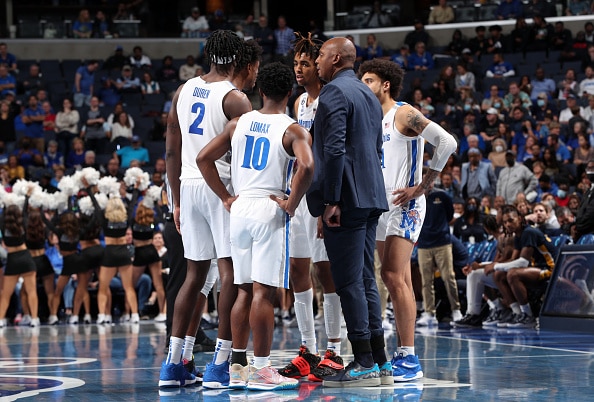 CBB Review highlights the ins and outs of every conference tournament leading up to Selection Sunday. Up next: The AAC Tournament.

The American Athletic has had a drop in the past couple of years. With a shake going through the AAC with the departure of Cincinnati, Houston, and UCF, this conference is about to take a significant hit. Some great teams are joining, but the prominence of potentially making it a Power 6 has become a pipe dream. Looking at the AAC, there are three potential NCAA bids in Houston, SMU, and Memphis. These three teams sit at the top, and likely, one of them will win the AAC Tournament. If not, there will be a different team in for either SMU or Memphis.

Kendric Davis was awarded the player of the year for the American. He is the glue guy for this team, creating shots for himself and others. Davis is at the top in scoring, averaging 19.5 points per game, and is top 3 in the conference in assists, passing out 4.6 assists per game.

Jamal Shead is the shot creator for his team. He can drive, find space for shots, and create shots for others. Shead had catapulted into a much-needed space in his second freshman year with Marcus Sasser going out due to injury. Shead has been a solid replacement jumping up in scoring and becoming the assists leader in the conference handing out 5.9 assists per game. He is also second in steals to help his team in more scoring opportunities. There have been two significant benefactors to his assists in Fabian White and Kyler Edwards. Fabian White averages 13.2 points per game and pulls down 5.9 rebounds per game, and causes issues against shooters by averaging 1.6 blocks per game.

DeAndre Williams is a game-changer for the Tigers. Williams has seemingly been the sole reason that Memphis has been winning. He is the spur for these tigers as he creates shots, pulls down rebounds, and goes after loose balls. The Tigers have been on fire with him on the floor, and he is either the spark or the heart for this team.

Jaylen Forbes isn’t the best shooter on his team but has come along this season. He has become a leader for this team with his consistent scoring. Forbes has only had five single-digit games and has ten games over 20 points. While his teammate Cook is outscoring 18.0 to 16.6 points per game, Forbes is the better shooter. Forbes grabs rebounds while Cook offers more by creating shots for other players.

Tulane is a team that surprised me all season. This team kept pulling off big wins and losing at the weirdest times. The Green Wave is a force when it is scoring and can do so. Already covered the top two players in Jaylen Forbes and Jalen Cook. Cook joining the program has seemed to unlock Kevin Cross, who has shown up this year for the Green Wave as the other scorer. Cross is scoring 13.8 points per game, almost doubling his scoring from last year. This team is only really missing a dominant big to round it out, and having someone to rebound and create space down low could take Coach Hunter’s team to the next level.

These two teams have met twice in conference play, and the Bearcats came out on top both times. While bearly pulling out a win against the Pirates on the road, Cincinnati won by one point on a bad shooting day. This game could upset, but I think the matured and more talented Cincinnati team takes it.

The Shockers controlled both of these games against Tulsa. While Tulsa has had opportunities, the stingy defense and ability to knock down shots when needed have boosted Wichita State over the Golden Hurricane. A key to this has been defensive player of the year Dexter Dennis. In the first game, he took away Jeriah Horne, and the second he made it difficult for Sam Griffin.

These two teams know each other well. Both have grabbed a win when playing at home and won by around 20 points. I think the Bulls got lucky in the first meeting and think UCF has the talent ability to win this game. USF would need another great shooting day for them and a poor one for the Knights.

Houston has dominated the Bearcats in both meetings. With the different skill sets and ability to speed up Cincinnati, the Cougars should trounce them in this game. Winning by 22 and 18 points in their matchups, Coach Sampson needs to keep his team motivated after losing to Memphis at the end of the regular season.

Going for an upset here, Tulane takes down Temple. After splitting in the regular season, Tulane’s offense is just too much for Temple.

This game is going to be interesting. These two teams couldn’t make up two opportunities for games postponed due to Covid. In the lone game they played, Wichita State shut down Kendric Davis and won by 15. The home crowd for the Shockers was a factor, and I am not expecting it to be a factor this time. With the proximity benefiting the Mustangs, I hope they run away with this one.

The Knights grabbed a win against the Tigers with Williams out. That was the difference as when he came back in the second game, Memphis won by 28. The Tigers tear down the Knights to advance to the semifinals.

The Cougars won both meetings against Tulane in the regular season by double-digits. While anything can happen, Houston’s defensive prowess is just too much for the Green Wave to overcome as the Cougars move onto the finals with a win.

The Mustangs were able to Memphis in both matchups in the regular season. Unfortunately, after finding a spark toward the end of the season, the Tiger’s talent causes SMU to fall short. Memphis is playing hot at the right time.

This year has been the year for Memphis with its sporadic play. However, when it comes to playing against the Cougars, the Tigers have had Coach Sampson’s number. I don’t think Houston has the depth and speed to beat Memphis without Mark and Sasser. The Tigers grab the AAC Championship.

One thought on “2022 AAC Tournament Preview”