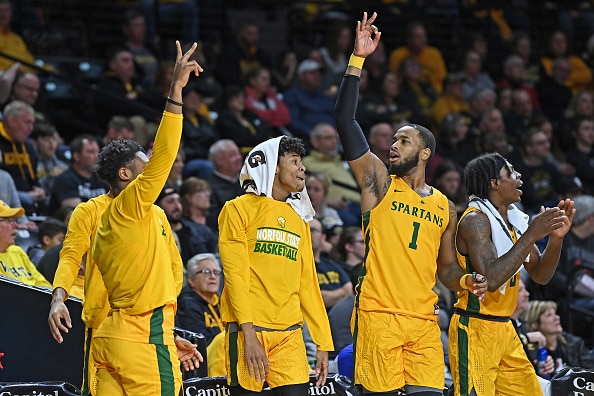 CBB Review highlights the ins and outs of every conference tournament leading up to Selection Sunday. Up next: The MEAC Tournament.

The MEAC was largely dominated by Norfolk State during the season. The Spartans took just two losses in 14 tries, and were just one of two programs to finish over .500 overall, with the other being Howard. There’s no doubt that Norfolk State will be favored to return to the NCAA Tournament heading into the MEAC Tournament being held in their backyard.

Joe Bryant took home MEAC Player of the Year honors after leading the league in scoring and finishing fourth in assists per game. Bryant is also an excellent defensive player who can do just about anything for the Spartans. Nendah Tarke can do just about everything for Coppin State. He led his team in scoring while also finishing tops in the league in steals per game and third in rebounds per game.

Kyle Foster has been a big reason why Howard finished second in the league this season. His ability to score at will should be closely monitored if the Bison are going to make a run. Finally, Justin Wright leads North Carolina Central and is one of the most efficient players in the league in finding good shots.

North Carolina Central has been to the top of the league before behind one of the best under-the-radar coaches in LeVelle Moton. The Eagles are one of the two teams that knocked off Norfolk State this season, so they know what it takes to defeat the top dog. If all things hold, they’ll have to get their first win against Howard this season, but this is the time of year when NCCU finds a way to make a run.

Delaware State went winless in league play, but don’t let that fool you. The Hornets only lost by three to Norfolk State the last time they played. However, I expect this to look more like the 29-point win NSU got the first time around. Push the Spartans to the semis.

Perhaps this is a tough draw for Howard, who was swept by Coppin State in the regular season. The Eagles could use that confidence to put the Bison on notice once again, but they haven’t played well over the month of February. Howard finds a way to avoid getting swept.

These teams split in the regular season, but Morgan State comes into the tournament on a four-game winning streak. Meanwhile, South Carolina State is on a three-game losing streak. Give me Morgan State as the hotter team.

This is another game where the teams split in the regular season. Maryland-Eastern Shore took the most recent meeting and has been much improved this season. However, North Carolina Central uses their experience to move on.

Morgan State is the other team that earned a victory over Norfolk State this season. The Bears have a high-quality scorer in De’Torrion Ware, but Norfolk State is just too good when it matters. The Spartans move on.

As mentioned earlier, Howard is NCCU’s kryptonite. The Bison also have Steve Settle supporting Kyle Foster to the tune of 13.8 points per game on the season. However, the Eagles find a way like they always do and pull of the mild upset here.

When it’s all said and done, Norfolk State shows off why they were the best team in the MEAC this year. Send the Spartans back to the NCAA Tournament. More importantly, this team has a good shot at avoiding a trip to the First Four in Dayton.

One thought on “2022 MEAC Tournament Preview”