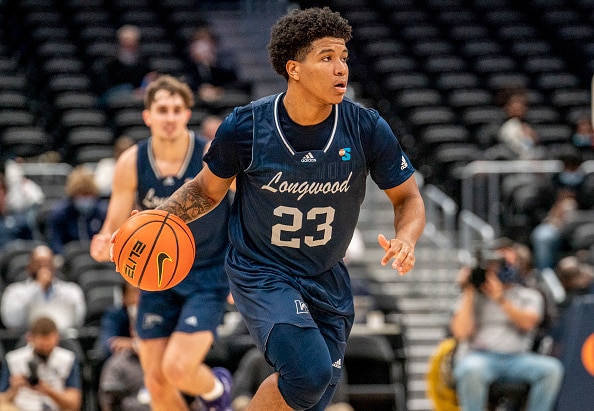 CBB Review highlights the ins and outs of every conference tournament leading up to Selection Sunday. Up next: The Big South Tournament.

This year in the Big South, it was a two-man race between Longwood and Winthrop. Longwood came out on top, going an impressive 15-1 in conference play, with Winthrop right behind them at 14-2. If you think this will be a two-man race, then you must not know it’s March, because teams like Gardner Webb, USC Upstate, and Campbell aren’t going to let them get in too easily. Read below for full coverage of the Big South Tournament

Each player to watch is the clear top dog on their team. Starting off is DJ Burns Jr., the conference player of the year and a big reason Winthrop carries an 8 game winning streak into the tournament. If Winthrop wants to go dancing again, they’ll have to rely on him.

Justin Hill is a big reason behind Longwood’s surprising season, getting it done on both sides of the ball. His biggest game was against Winthrop when he dropped 29 points to pull off the major win. Expect him to do the same in the tournament.

USC Upstate had the most surprising season, being ranked 12th in the preseason poll yet finding themselves as the 4th best team in the conference. Mozone was a major reason why scoring 15 a game on decent splits.

Pember is the best two-way player in the conference, averaging 15 points and 3 blocks per game. If I’m a Big South big man, I’m praying my team doesn’t get matched up against UNC Asheville and Pemper.

Moving on to Mr. Harrison, the second-highest scorer in the conference at 17 points per game. Presbyterian didn’t enjoy a great season, but with Rayshon on the court, they’ll have a chance.

The only person with more points per game than Harrison is John-Michael Wright, who averaged 18.5 a game. He scored in double digits in all but one game in February and enjoyed 11 games of 20 or more points this season.

While they sit at the 7 seed in the upcoming Big South Tournament, they have major upset potential. They are one of the two teams to beat Winthrop this year, with the other being 15-1 Longwood. Speaking of Longwood, they only lost by scores of 4 and 7 the two times they played. With John-Michael Wright on the court, this team can beat anyone, so try to make time to watch this High Point team.

Here we go. The first-day conference tournament games have arrived and college basketball fans can’t be more excited. These two teams played twice this season and split the series. However, they faced each other in the last game of the season and Radford won on the road by 9. They make it two in a row here.

Charleston Southern won one game in conference play and lost by 19+ both times the two teams played. Don’t expect a second win here.

This could be a good game, with the first of the two matchups they had going into overtime. This one could go either way, but the chalk continues as High Point takes this one by single digits.

Do you love upsets? Well here’s one for you. Presbyterian won the head-to-head this season and tournaments are best catered for top dogs. In this case, it’s Rayshon Harrison who I mentioned as a player to watch and he will do whatever it takes to prolong the season.

Even though Radford kept it close with Longwood this season, losing in overtime once and five the other time, expect the chalk to continue. Hope the working class enjoys some quality basketball during their lunch break.

Nothing beats a 4 v 5 matchup. USC Upstate stumbled to the end of the season, winning close games against teams they should have beaten and getting crushed by Winthrop and their opponent in this one, UNC Asheville. The second “upset” of the tournament happens here with UNC Asheville taking this one.

This could be a good game, and High Point did get the best of them in their two matchups, but it’s hard to stop a team when they’re hot. Winthrop by 5-10.

While everyone is rooting for the cinderella story, you won’t see that here. Gardner Webb swept the season series and will do so again to move onto the semifinals.

These teams played once in the regular season, and it resulted in a 56-48 road win for Longwood. The scoring has been a lot better for UNC Asheville, scoring 69+ in all but one game since. Still, they won’t have enough firepower to take down the favorites. Longwood to the finals.

Two of the better teams in the conference take on each other in a high-powered affair. Gardner Webb will bring it all like in the regular season, but unfortunately for them, they won’t get the result they want. Woohoo, a 1 vs 2 seed finale.

Longwood is looking for their first March Madness appearance ever here while Winthrop looks to make it three straight tournament appearances. This should be a close one throughout, but experience wins, and DJ Burns will bring Winthrop the Big South tournament championship and send them back to the promised land.