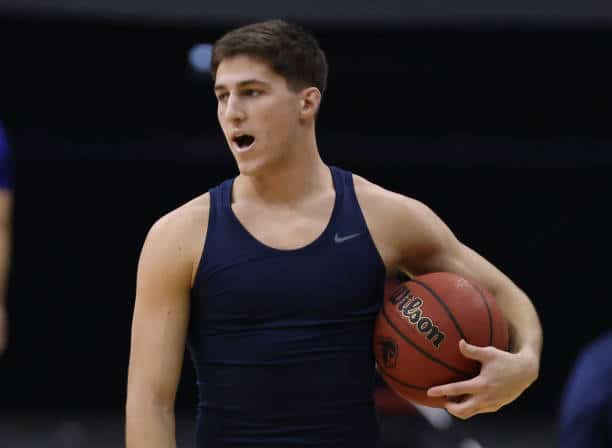 In the game of the night on the first day of March, Villanova and Providence fought in a classic Big East battle.

Villanova went on a late run to take a 40-26 lead into halftime, but like most Big East contests, this one wouldn’t stay like that for long. The Friars shot out of their heads to start the second half, pulling within one possession by the 12:35 mark.

Multiple clutch shots from Caleb Daniels and then Justin Moore kept the Wildcats from losing the lead late, as Villanova went on to win, 76-74.

Villanova senior guard Collin Gillespie was playing in what was his final game at Finneran Pavilion. He noted the atmosphere and high-level play of the game.

“That’s what the Big East is about… it’s always intense,” Gillespie said.

The win gave Villanova a 2-0 series sweep of the Friars, although Providence still claims the Big East regular-season title.

Collin Gillespie and Jared Bynum have been masterful all season long and nothing changed as the two went face-to-face.

Gillespie finished with 5 assists and 0 turnovers, as well as 14 points on 4-of-12 shooting. Meanwhile, Bynum impressed even more, attaining double-double status with 19 points and 10 assists. The junior guard also added six rebounds but did cough the ball up 4 times – a team-high.

Both these lead men are playing at a high level heading into the postseason, as we officially hit the March Madness season. Providence potentially has more question marks, but Bynum should not be one of them. That’s an important box to check, and Bynum raises no discussion other than how far he can take this team in March.

Meanwhile, Gillespie’s legacy continues to grow. His ball-control has always been a positive and with zero turnovers against the number nine team in the country, Gillespie seems poised for another long run in the NCAA Tournament.

We know Villanova isn’t afraid to let it fly – the Wildcats average about 25 threes attempted per game, which is good for the top 50 in the country. But the Friars average five less and are more known for their presence around the rim both offensively and defensively.

Providence nearly hit its season average in the first half, launching 19 threes. Yet they only connected on five, a big part in what put the Friars down 14 at the break.

Something changed in the 15 minutes inside the locker room.

Providence exploded from deep, nailing its first seven attempts from downtown. Six of those were off the hands of AJ Reeves and Noah Horchler, who combined for 10 threes total in the game.

For the game, Providence shot 15-of-32 from deep, amazing considering the 5-for-19 start in the first half. Quite the turnaround and adjustments as Jared Bynum’s point guard play was a big reason for the open shots.

Five turnovers. That’s all the Wildcats committed over the course of the entire game. That’s nothing new for a Jay Wright-coached team but it’s certainly still remarkable, especially against an Ed Cooley-coached team who is known to pressure the basketball.

On the flip side, the Friars tossed the ball away 16 times, with one coming on the last play of the game.

Providence was yet again without Al Durham, who is expected back in time for the Big East Tournament. However, it’s a bit unnerving to have turnover problems this late in the season, especially against tournament competition.

At the beginning of the season, I wasn’t too high on Villanova’s ability to play strong inside. Jermaine Samuels seemed undersized and little was known or proven from Eric Dixon’s time in a Wildcats jersey.

But those two battled against Nate Watson and Ed Croswell – which isn’t an easy challenge for anyone. And Wildcats head coach Jay Wright is taking his frontcourt duo against, well, anyone.

“I trust Jermaine and Eric against anyone,” Wright said.

Blunt and to the point. Although, why shouldn’t I trust Villanova to develop players and find a way, even without a seemingly dominant big. After all, they’ve done it before.