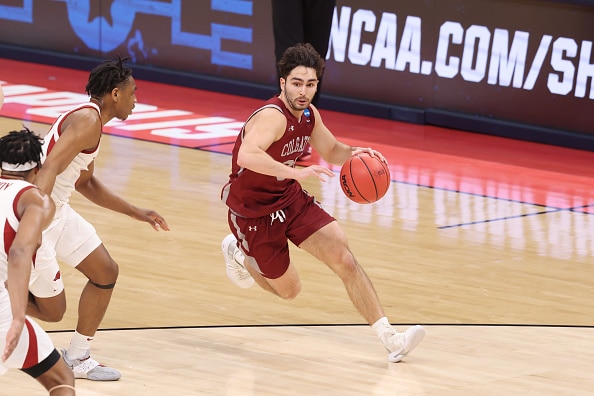 CBB Review highlights the ins and outs of every conference tournament leading up to Selection Sunday. Up next: The Patriot League Tournament.

The Patriot League is often overlooked and will only send its champion to the NCAA tournament. The clear leader of this League is Colgate, with its dominant big man play and solid guards separating this team from the pack. The Patriot League’s leading field goal shooter, block leader, and top 5 rebounders in this league is Colgate’s Keegan Records.

If you like this article, check out our NEC Tournament Preview

All of these players bring unique aspects to the game. These players affect the game differently and boost their teams.

Keegan Records has three double-doubles in conference play and three games in which he scored over 20 points. Records have improved in so many aspects year after year. He is limited only by his inability to shoot the 3-ball and needs to get better at the charity stripe. His teammate, Ryan Moffatt, is one of the best 3-point shooters in the Patriot. If he gets hot in any game, the game is likely over with this duo working in tandem.

Cam Spencer is probably the best player in the Patriot League. He is taking a huge step up from the past two years averaging barely above ten points a game to being the Patriot leader in scoring. He only has two games this year where he didn’t have double-digit scoring. He can move the ball well, create shots for others, and get to the free-throw line.

All-@PatriotLeague First Team for a reason!

The Terriers have been inconsistent but have battled in games. This team has two of the better guards in the conference and a solid force on the interior. If this team can find a groove, it could cause some trouble in the tournament. Coming in with a high seed, Boston University basketball could find itself coasting into the semifinals and even the finals of the Patriot League Tournament.

Holy Cross should win this game on Paper, but their matchups have not walked away with a win. Americans can’t fall asleep because the ball could end the Eagle’s hopes if the Crusaders limit their fouling and move.

These games have been fun to watch this year. The two matchups have been an offensive bombshell, and ball movement is art. Bucknell, while having the worse conference record, should win this game.

The Raiders should end all hopes for Bucknell in this game. The Bison have lost in both matchups by 19 points and 14 points.

This game is a coin flip. Another two teams have split, but the edge is going to Lehigh as they are hosting, and this is where the team won the last time. Having a home-court advantage could be the difference in this game.

Navy has pulled out wins against American by two and nine. Josh Carter Jr. and Tyler Nelson will be the key players for the Midshipmen to win this game. Navy will need to shoot the ball well in order to win these games. It has been a real struggle for the Midshipmen if the team cannot knock down its shots.

These two teams split their matchups. Unfortunately, the Greyhounds had to have the Terriers have an off day and shot the ball well. Boston University played a solid game in the next matchup and should walk away with a win. This game has the potential for an upset alert here.

Lehigh has hope as it is one of the only teams to take Colgate. If the Mountain Hawks want to win, the team needs to have solid ball movement, limit turnovers, and knock down open shots. The stars will not align, though.

Navy has dominated Boston University in their matchups. I don’t think this changes as the Midshipmen continue to find different players stepping up in different situations. The balanced offensive attack will be too much to overcome for the Terriers.

While these two teams may not make it, they seem the most likely to end up here. I expect the better players on Colgate’s squad to be dancing as they take up most of the Patriot League’s leaders coming from the Colgate team. If the Raiders can continue clicking, this team could upset a team or two in the NCAAT.