It’s The Year Of The Big Man In College Basketball 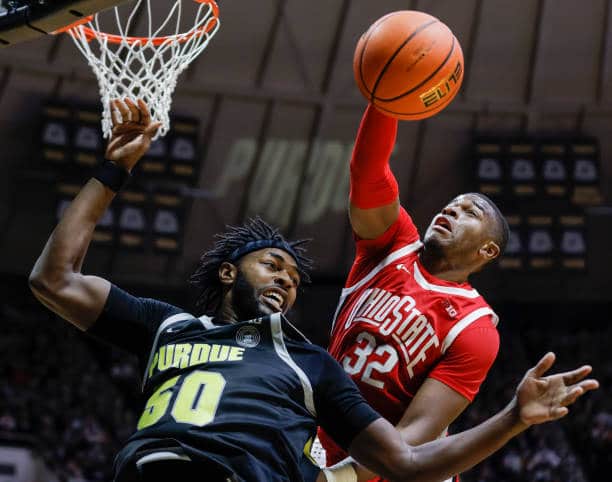 Big man play seems to be a dying breed – but in college basketball this season, it’s been nothing but.

In an age where guard play, long-distance shots, and spreading the court have changed how basketball is played, we’re seeing an unprecedented year in college basketball. Big men are stealing the show, and it’s becoming historic.

When Kofi Cockburn announced his intent to return to college, we knew what we were in for. Cockburn already started last year as one of the top big men in the country and his domination grew throughout the season. The road ended short for him in March, but the Illinois center decided one more year was in the works.

On Wednesday, Cockburn showed what he’s about – straight business. Cockburn had a monster game – 37 points, 12 rebounds, and a block for good measure. He was untouchable around the rim, making 16-of-19 field goals as if there was a vacuum connecting his release to the bottom of the net. Mind you, all of this came against Wisconsin, a defensive-minded team ranked 11th in the AP poll.

What’s insane is how numbers like that would usually make you jump right out of your seat. After all, Cockburn put up that performance against two Badger 7-footers. But Cockburn, a 7-0, 285 menace himself isn’t exactly known for folding against the competition.

“My coaches emphasized how physical I should be in the game, so certain games you’ve got to take advantage of it,” Cockburn said, I think I can score on most of the bigs in the Big Ten, if not everyone.”

There’s really no lie in that sentence. Cockburn is averaging 22.1 points and 11.6 rebounds on the season. He’s doing it at a rate above 60% from the floor. And sure, there’s bound to be off nights – like a 10-point outing in a loss against Purdue. But we can go back to his 23 points, 18 rebounds performance against Maryland if you want to play that game.

The Big Ten is where it starts

Going back to Cockburn’s quote, there are two things to take away. For one, it’s obvious that his confidence is shining. Cockburn knows his worth, even against the best. But it’s his humbleness to see the greatness in the Big Ten as a conference.

At the beginning of the season, I ranked the top ten returning bigs in college basketball. You know, that usual preseason junk that I, the analyst, admittedly know just as much as Joe-schmo, but hope to get that one sleeper pick right.

Well, I must have been on to something, because my early thoughts about the Big Ten have come to fruition! Although to be fair, with how most of them played last season, that wasn’t too hard.

All in my top five were Trevion Williams, Hunter Dickinson, Trayce Jackson-Davis, and Cockburn (in first). TJD has certainly upped his game, especially as a rim protector. Dickinson has also improved across most of the major categories, especially with his court vision. And while Williams has accepted a bench role to fellow big Zach Edey, his numbers are still very key to a special thing brewing in West Lafayette, Indiana at Purdue University.

What I underlooked was how many of the other fierce Big Ten bigs weren’t just conference stars. E.J. Liddell and Pete Nance are both true stars in their own right. Liddell is up for National Player of the Year, and Nance could be the Big Ten’s most improved, and certainly goes overlooked with the Wildcats.

Who could’ve expected this from Oscar Tshiebwe?

The big man – really player – in college basketball that’s surprised almost everyone the most is Oscar Tshiebwe.

Coming into the season, I think there were a few arguments going against Tshiebwe. For one, Kentucky hasn’t exactly gotten the most out of some other big transfer names in recent seasons. The Reid Travis experiment comes to mind first. Nate Sestina also underperformed after some fairly high expectations. Interestingly enough, Travis and Sestina were both forward/big type players, so that was already one count against Tshiebwe ever working out.

The other thing was Tshiebwe’s regression and departure at West Virginia. After a sensational freshman campaign, Tshiebwe’s points, rebounds, blocks, and overall play dipped. 10 games in, he decided to transfer, and I think that left a sour taste in a lot of college basketball people’s mouths. The problem was almost instantly put on Tshiebwe.

Tshiebwe spoke on the reason for transferring.

“Sometimes you choose a place and you get there and it’s not working. It’s not like you don’t like the people, you don’t like the place. Like for me, I truly believe in God because God is making most of the decisions in my life because I pray for it and I listen to what God is telling me to do and I make my decision.”

Now, in no way am I blaming anything on Bob Huggins and I think it’s clear Tshiebwe doesn’t hold any hard feelings toward ‘Huggy Bear’ either. But I know darn well that Tshiebwe’s in the right place because my goodness.

Do you know how I said earlier that Cockburn’s stats don’t necessarily make you pause and read them over again?

Now, Cockburn’s got him beat with the averages. Tshiebwe is putting up 16.1 points and 15.2 rebounds per game. But some of his single-game performances have been just plain jaw-dropping.

You get the point. Tshiebwe is a once-in-a-lifetime player. But so is Cockburn. And Liddell is also an NPOY candidate. And Dickinson and Jackson-Davis and… you get the point.

The mid-major level doesn’t drop off

You thought I was done, didn’t you? As the old quote goes, “They had us in the first half I’m not gonna lie!”

And there are certainly two halves of basketball, so I can’t just leave without pointing at a few mid-major stars that are right up there with the power conference studs.

It starts with Fardaws Aimaq. If we’re talking insane season averages, how’re 19.2 points and 13.6 rebounds for you?

Aimaq is like the mid-major version of Tshiebwe. No, not the rip-off version. Because he’s right there. He just plays in a “less competitive” conference which is borderline insanity if you ask me.

Now, don’t you see what I’m saying? And when you’re putting graphics together for the top games of the day, you see this often and you think “how historic is this?”

Well, I’m going to tell you!

Which reminds me – Bacot and Drew Timme. Two more absolute studs that I could write a whole other book about. Both will be right up there for their conference players of the year. And if I’m forgetting anyone, I apologize. That’s pretty easy to do because of all this talent.

But I’ll carry on.

Last year there were two.

2018-19 was the last time four people had those numbers. The players: Nico Carvacho on Colorado State, Devontae Cacok on UNC Wilmington, Mike Daum on South Dakota State, and Lamine Diane and CSU Northridge.

Now a couple of notes. Last year, there was a heck of a lot more players who fit that category. But a few factors: some were guards and the shortened season changed a lot of stats. In fact, most teams have already surpassed the total games played mark from 2020-21.

And I’m also not arguing the craziest statlines. Guards putting up those types of numbers is commendable, but this is about big men succeeding in a dying brand of basketball.

So with that information, look back at those players from 2018-19. There’s something similar – they all play for mid-major teams.

Now call me a fraud, because I was just in full support of Aimaq’s abilities, so I can’t discredit any of these guys.

But there’s something different about this season – where 3 of those 4 guys play for some of the best programs in college basketball history. I know John Calipari, Brad Underwood, and Hubert Davis didn’t just turn back the clock to 1960 and adjust their coaching styles. They’re all just truly blessed with some transcending big men.

So why’s all of this matter?

Look, I’ve always sung the same song – you need a few things to win and go far in March: A good, experienced point guard, the ability to play both sides of the ball, and some shooters. You have that and you have enough to fight out a win against any style of play.

This year is looking a little different. There are just too many teams with big men who will ultimately change the course of a game. It’s not just a few guys here and there. It’s multiple – many – contenders who prioritize their big men to the point where if you can’t rebound, all of those keys I highlighted in the previous paragraph fall out the window.

Rebounding’s always been important, but nothing as close to how much it will be this March Madness.