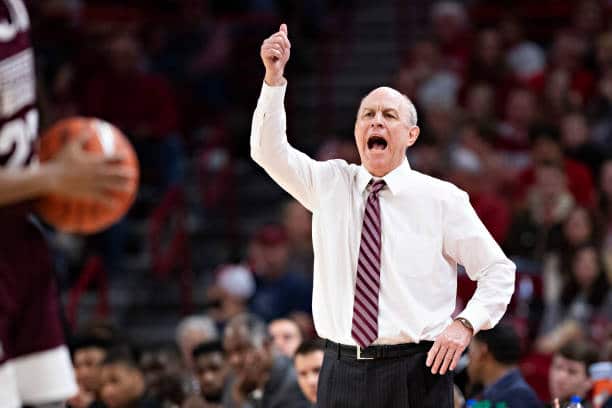 Mississippi State could not miss from inside the arc against the Gamecocks.

Mississippi State basketball was on fire against South Carolina Tuesday night, holding Frank Martin’s squad to just 64 points in the 78-64 win. Iverson Molinar led the way for the Bulldogs with 20 points, while James Reese scored 15 for the Gamecocks. The Bulldogs improve to 14-7 overall and 5-3 in SEC play while South Carolina falls to 13-8 overall and 4-5 in SEC play.

Mississippi State outrebounded a physical South Carolina team by almost a double margin, even without their top rebounder (Tolu Smith). Averaging 7.5 more rebounds per game than their opponents this year, Mississippi State ended up with 17 more than a sluggish Gamecock squad, grabbing 41 boards and only allowing 24. Garrison Brooks led the Bulldogs with 9 boards in the contest.

South Carolina continues to be streaky from the field, shooting just 41% from the field and 27% from beyond the arc. If you take away Reese’s 7-for-9 shooting night and A.J. Wilson’s 3-for-3 effort off the bench, the Gamecocks only hit 14 of their 46 shots, good for 30%.

The continuing story of one player making most of the big shots for South Carolina has been a constant issue, whether James Reese or Erik Stevenson has been the one shouldering the offense. If the Gamecocks want to get above .500 in SEC play or try for any postseason berth, the offense needs a revamp.

Michigan State transfer Rocket Watts provided a boost off the bench for the Bulldogs, hitting three triples and finishing with 11 points. Mississippi State only managed one three other than whatWatts provided, but still cruised. The fact that Watts can come off the bench for Ben Howland’s squad speaks to the depth of this Bulldog team.

Down by as much as 27 late in the second half, the scoreboard does not accurately portray most of the game. A 13-0 run pulled the Gamecocks’ deficit to just 14, but it was too little, too late for the ‘Cocks. Molinar and Brooks feasted in the paint for almost the entirety of the game, one that was not even close.

The result greatly impacts SEC standings, pulling Mississippi State into the upper echelon of contenders with their 5-3 record, while South Carolina falls behind a handful of teams, moving to 4-5. The Bulldogs will travel to Fayetteville to take on Arkansas on Saturday, while South Carolina plays host to No. 22 Tennessee.