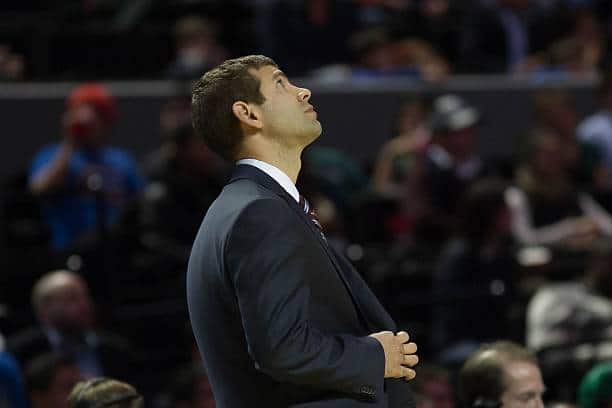 As Louisville officially departs with Chris Mack, the Cardinals program is set to be the hottest job open in college basketball.

There’s no question how great the Louisville job is. However, Chris Mack’s stay didn’t last nearly as long as Louisville hoped when they hired the former Xavier basketball coach. Mack’s tenure didn’t even reach four full years with a disappointing 68-37 record.

By most standards, that’s actually not a terrible record. However, Louisville is a program that asks for much more, and it became clear that Mack’s time with the Cardinals was in trouble as he only reached one NCAA Tournament with them in 2019. The 2020 season was his best, but of course, the start of the COVID-19 pandemic forced the Big Dance to be canceled and never made up. Since then, the drop-off of Louisville began.

Mack was suspended six games to start out the 2021 season. Tensions were high because of that, but never got out of hand. It was a mutual separation.

Now, the Cards will look to find a replacement. Whether they stay in-house or go elsewhere to find a new head coach, it’s clear Louisville is looking for more stability. The once-proud program doesn’t want to nosedive off the cliff it looks like it’s headed for.

Look, I don’t want to question Eric Musselman’s loyalty, because this is not a knock on that. Simply put, when a job like Louisville opens up, anyone who is a college basketball coach has got to weigh that option. And Musselman is certainly a coach who could thrive with the Cardinals.

He transformed Nevada into a winning program and Arkansas took a shot on him at the Power Conference level. Now in his third season, Musselman has turned the Razorbacks into a top-half SEC team, which isn’t easy.

Now, of course, Musselman might just want to have some stability of his own and not willingly coach his third team in eight seasons. But he is still fairly young enough to the head coaching game where he could afford to make this move. And if he did, I’d have to think he’d be extremely successful and it would be a long-lasting move.

Musselman’s passion and recruiting ability would go hand-in-hand with what Louisville is as a program. The ACC is also losing some valuable coaches (Roy Williams last year, Mike Krzyzewski this year, and Jim Boeheim sooner rather than later) so he could really get Louisville back to where they should rightly be  – at the top of the conference.

Woah, woah, woah, I bet you didn’t expect this! Stevens just stepped down as the head coach of the Boston Celtics for a front-office role with the team.

Something tells me the 45-year old might not be done in the coaching field just yet.

He’s a mid-west kid and while Louisville isn’t Zionsville, Indiana, it would be the same general region. So right there, Stevens understands what it would take to recruit kids to come to play at Louisville.

But he’s also one of the most respected basketball minds in the game – college or pro. There are not many coaches who have that working for them.

The Cardinals have also had some decently above-average success with former Boston Celtics coaches who came to town… and before you read any further, no, Rick Pitino is not on this list.

Travis Ford might not be the potential choice that jumps off the page, but in terms of Rick Pitino’s coaching tree – which Louisville would be hard-pressed not to look at – Ford has a long-standing resume that is well worth a long look at.

Ford played under Pitino at Kentucky, but I don’t think that’d stop him from taking the Louisville job. Since then, he’s risen up the coaching ranks and notably has done it at a handful of midwestern schools, including Eastern Kentucky.

Ford, 52, has been the head coach for the Saint Louis Billikens since 2016 and might be in for a change. He’s already been in charge of five schools since 1997, so I don’t think another coaching change would be out of the possibility for Ford.

Saint Louis has also thrived under his leadership in the Atlantic 10. If Louisville wants to consider all options, Ford has got to be on the initial radar. It’s an underrated option with a lot of potential behind it.

Another Pitino guy, Willard was an assistant under Rick at Louisville from 2001-07. Any time a job opens up, former assistants will get a call. Especially when your name is Kevin Willard.

Now, maybe Louisville won’t want another bald-headed Big East guy (I’m only kidding, Kevin). But Willard’s track record is much more proven than Mack’s was when he got hired. Mack was certainly a good choice, but what Willard’s been able to do at Seton Hall has arguably been even more masterful.

If Willard is going to leave the Pirates, who he’s been with since 2010, now might be the right time. His name has come up in the Maryland job search as well, so his stock is at an all-time high.

The only thing stopping me from putting Willard at number one on this list is his loyalty to the Hall. He’s had multiple chances to leave and he’s stayed in South Orange, New Jersey. Maybe that’s Kevin’s true calling after all.

Why would Pearl leave the current top team in the nation? That just doesn’t make any sense, Mat!

Well, let me tell you why. Bruce Pearl’s always been a guy who wants to and is capable of coaching the top programs in the country. He did it at Tennessee and now he’s doing it at Auburn of all places.

That checks off two key boxes:

Pearl would have the chance to do both at an even better program in Louisville. His stock is as high as ever, and boy would that be one heck of an offseason coaching change.