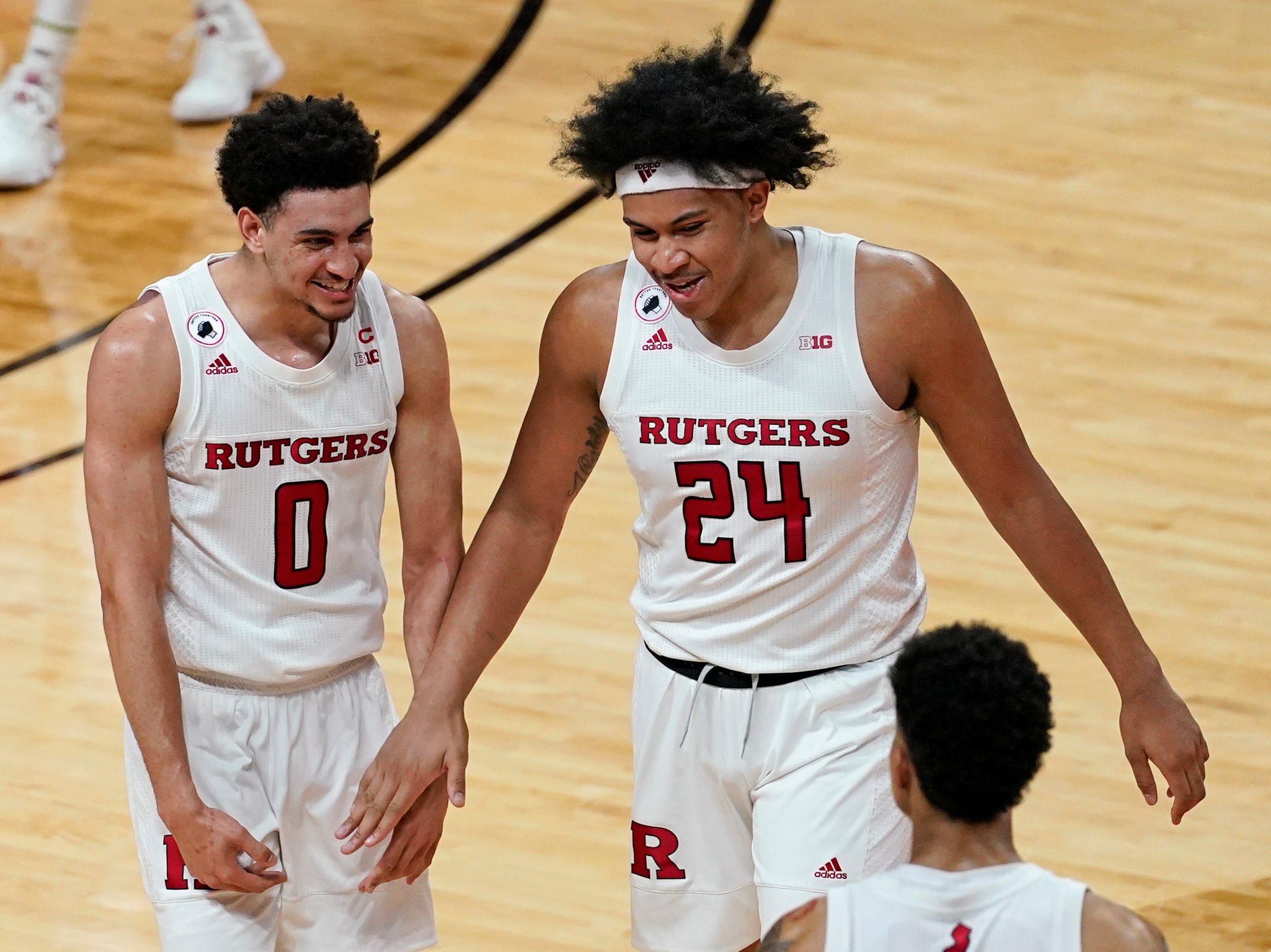 Geo Baker and Ron Harper Jr. give it one last go as Rutgers basketball looks to capitalize with its star duo.

The third time’s the charm goes the old saying. This is the third straight year and last chance for Geo Baker and Ron Harper Jr. to put it together and make a deep run in March with Rutgers basketball. The Scarlet Knights welcome back a few other returning players to co-exist with them, but it’ll be up to both seniors to put it together.

“To finish what we came here to do. To finally fulfill @CoachPikiell‘s vision.”@Geo_Baker_1 and @__RHJR shared why they returned to @RutgersMBB for another year 💯

The sweet shooting of Paul Mulcahy, a rising sophomore that is Clifford Omoruyi and young bench ready to explode has Rutgers in position for a lengthy run. The question will lie on how head coach Steve Pikiell will be able to get them to live up to the lofty expectations in East Brunswick, New Jersey.

There really aren’t any more excuses. Ron Harper Jr. has got to get it together if Rutgers basketball wants to compete in the toughest conference in college hoops. After becoming a star his sophomore season, Harper Jr. saw a setback last season. His three-point shot fell the most, but overall Harper Jr. didn’t adjust to the tougher defenses that went along with his stardom.

This season, Harper Jr. has to pick his spots. Unless the offseason is to prove different, he isn’t a knockdown shooter from deep. It’s certainly a part of his arsenal, but Harper is best when attacking ferociously in the paint, getting out in transition, and using his size to power by defenders.

While Geo Baker needs to step it up also, Harper Jr. is the key to Rutgers’ success. If his scoring can rise up to a higher level, Big Ten teams will have trouble beating this team. I don’t think Harper Jr. came back to mess around. He’s going to have a world-class year.

Last season, it was Myles Johnson pulling down rebounds and scoring inside for Rutgers basketball. With Johnson transferring to UCLA, it means the starting center job is Omoruyi’s. Those are big shoes to fill – size 17 or 18 if we’re being technical – for someone who’s just a sophomore.

As a freshman, Omoruyi showed his potential of being the five-man in a Rutgers uniform. It may have happened one year sooner than expected, but if he’s ready, it will mean big things for a Scarlet Knights team that is sound everywhere else with its lineup at the opening tip.

I think this Rutgers bench is set to surprise some doubters. Based on statistics from past seasons, there aren’t any role players that appear to be ready for big years in the scoring department. However, with Harper Jr. and Baker taking the majority of attempts from the field, that isn’t what the Scarlet Knights are trying to do on offense.

Instead, this bench is filled with glue guys who will come in and move the ball and rebound. McConnell is a senior who knows his role and if you’re looking for a guy to improve in the scoring department, Hyatt seems like the best bet.

After them, Miller and Mag are two role players who might only play four to five minutes in each half but are both talented underclassmen who will be a big part of this program in the coming years. Oskar Palmquist, Dean Reiber and Jaden Jones are three more bright young players who could crack the rotation early on and receive minutes as the season progresses if Pikiell chooses to play a deeper bench.

The Rutgers defense was absolutely frightening to play against last season. The Scarlet Knights were 16th in adjusted defense in 2020-21, finishing fourth in the Big Ten in that category.

Rutgers basketball shut down opposing offenses throughout the year, keeping Maryland to 60 points, Indiana to 50 and Michigan State to just 37 points scored. In the NCAA Tournament, it was even more consistent, as they knocked off Clemson, 60-56 and gave Houston a scare, losing 63-60. Rutgers held the lead with less than 30 seconds to play and I’m sorry to do this to their faithful, but that win was there’s for the taking. This year, that can’t end in a loss.

This season, expect the Rutgers defense to be right up there again. Returning five guys that played valuable minutes last season is very key to keeping a stout defense. Agee and Hyatt are two thick big men that should also make an impact on the defensive end as two transfers. If you’re going to win in the Big Ten, defense is important and this Rutgers team has that down.

Playing in the Big Ten leads Rutgers to a below-average non-conference schedule, but games against Clemson and Seton Hall should still help their NCAA Tournament case if it gets to that point. However, when you play Michigan, at Maryland, Iowa, Maryland, Michigan State, Ohio State, at Wisconsin, Illinois, at Purdue, at Michigan, Wisconsin, and at Indiana with filler games in between, the selection committee will forgive you.

Those Big Ten games will be how to judge if Baker and Harper Jr. are ready to bring Rutgers basketball to a new level. Last season the Scarlet Knights had a five-game losing streak during its Big Ten schedule in January. That can’t happen again, but with how weird the COVID year was, I’m willing to look past that.

I like Rutgers to finish eighth in the Big Ten, but that isn’t to say they can’t climb all the way up to fourth or fifth. It’ll still be tough for them to outperform teams like Purdue, Michigan and Illinois, but Rutgers has the makeup of a Big Ten team that can compete with the higher-ups.

In August, I projected Rutgers basketball as a 7-seed pitted against St. John’s in an old Big East matchup. I would pick the Scarlet Knights in that game, but if they can earn a 6-seed or better, they can certainly ride that wave and carry momentum into the second weekend of March.