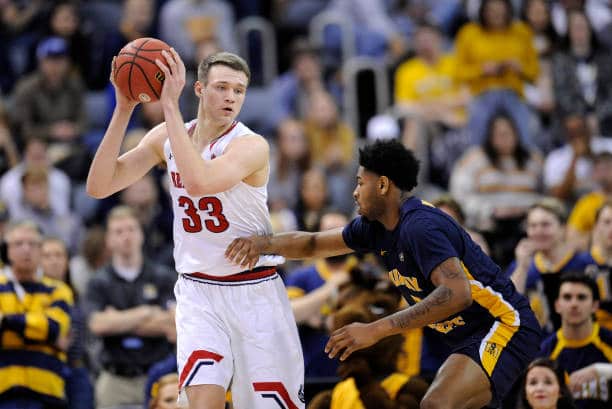 Belmont basketball will move up to the Missouri Valley Conference and hopes to appear in the NCAA Tournament this year.

Belmont basketball had a great year leading the Ohio Valley Conference finishing the season with a record of 26-4 and 18-2 in conference play. In the OVC championship, coach Casey Alexander cut short after the team fell to Morehead State.

Morehead State made it to the NCAA tournament with the guaranteed spot, and Belmont hoped it would make it but didn’t hear its name called on Selection Sunday.

Only one player was lost to the transfer portal in Mitch Listau, who transferred to Green Bay. Listau’s ability and skill off the bench is something that Belmont basketball will miss. Coach Alexander did bring in a couple of two-star guards in Isaiah Walker and Will Richard.

"It's a win for Belmont & I believe it will be a win for the Missouri Valley as well."@TheAndyKatz sat down with @BelmontMBB Head Coach @CaseyAlexander_ today to get his reaction on the move to The Valley ⬇️ pic.twitter.com/BG7YGZKNKO

This small school will have to do some serious work to move forward and prepare to be a part of a challenging conference in the Missouri Valley. Coach Alexander will hope to create a powerful team to compete as it launches into the future. With the hopes of making it to the NCAA Tournament in 2022, Belmont basketball will aim to prove it belongs ahead of joining its new home.

Returning with the NCAA exception for Covid, Grayson Murphy hopes to stay atop the conference and lead Belmont basketball. He led the Bruins and the Ohio Valley in assists, assists per game, defensive rebounds, steals, steal per game, 2-point field goal percentage, Box plus/minus, and offensive rating.

Murphy can create shots, has great floor vision, and is a massive defensive asset. He is hoping to get noticed and has some talent that goes overlooked because of his conference. With an additional year of growth, Murphy is looking to help Belmont basketball and Coach Alexander. He could also help build and prepare for a professional career in the NBA. Murphy will end up as a first-teamer in the conference again and make history with the Bruins.

Belmont basketball was led in scoring by Nick Muszynski, and he will need to continue to grow and score. He needs to step up and be a leader in the conference.

Muszynski’s length and ability should lead to more blocks and steals when driving the lane. Muszynski should take a step with an additional year of play and raise his basketball IQ, knowing what he can do to help Belmont make a tournament run.

Belmont basketball is extremely balanced not only in maturity but also by position. Having experienced players will help bring along the younger athletes. The Bruins have three senior guards, two junior guards, a sophomore guard, and two freshmen guards for eight total guards. JaCobi Wood will be the bench player to rely on and could get some starts along the way.

The Bruins then have a senior forward, a junior forward, and two sophomore forwards for four total forwards. Belmont basketball has one senior center and one sophomore center. Brauns is a forward to keep an eye on. As a sophomore, he could be in for a breakout season.

This balance allows the younger guys to learn from the older players and grow into better players. Coach Alexander recruits well and will get better recruits moving forward. His team can also switch up the style of play from a two-guard to a three or four-guard system. Playing different styles gives Belmont a boost and a decent chance of dancing once into the NCAA tournament.

Belmont basketball knows what it has in a talented big man in Muszynski and they play to that strength. The Bruins had an NP% of 66.04, which is the number of near proximity attempts per 100.

The Bruins also ranked well within the top 100 in 3PAR, so it isn’t as if they settle one way or another. With that being said, they like to feed the ball inside, which in turn either leads to layups and dunks or a pass back outside. The ball movement they have is utterly incredible.

Belmont basketball has set up a decent schedule and has excellent opportunities to build a strong NCAA resume. The Bruins will hope to win these vital games to make a statement this year. The team gets a non-conference schedule, including LSU, Ohio, Drake, Furman and.

Belmont did end up in an ESPN Events invitational tournament that will give the team a chance to play Alabama or Iona, and then one of Kansas, UNT, Dayton, or Miami. Winning these games would be a huge statement and would likely stun a lot of the Ohio Valley Conference if the team can come away with two wins.

By the end of the season, Belmont basketball should be able to find a way to rack up another 25-win season, something coach Alexander has been able to do in each of his first two seasons. However, every year gets tougher and the Bruins will have a huge target on their back as the clear-cut conference favorite.