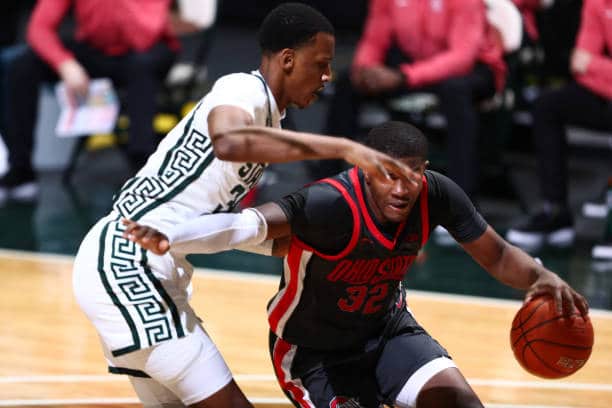 These ten Big Ten basketball players look to run the conference that produces as much talent as the next.

Big Ten basketball is known for two things: Ohio State running the football side of things and entertaining basketball from the entire conference. These are the top players to watch in the loaded conference.

Ayala is the piece that keeps Maryland in the mix of games. An effective guard that can run the 1 or the 2 Ayala will be the reason the Terapins can compete for a Big Ten basketball championship behind his scoring ability and impressive defense.

Harper is one of two reasons that Rutgers basketball is relevant. Behind his playmaking, off-ball abilities, and scoring ability Harper leads the Scarlet Knights to wins. His decision to come back was critical and he will need to shoot better from three this season.

With Isaiah Livers and Franz Wagner out of the mix, Juwan Howard needs a wing to replace them. Who else but the 5-star near 7-foot wing Caleb Houstan? Houstan can shoot the three well and can drive to the basket with ease. With his height and length, Houstan has all-Big Ten all defensive promise.

A player with unlimited potential, Cuberlo has shown sparks of his best self but was forced into a bench role last season. The Illinois guard has some of the best playmaking ability in the country to go along with a precise layup package while being able to knock down 49.8% of his shots last year from the field.

Ivey is an entertaining player, to say the least. He has unlimited athleticism and drives to the hoop like a mad man. All that athleticism to go along with astonishing defensive play makes him one of the most entertaining guards in the country. Ivey has all the tools for a perfect Big Ten basketball player packed into a 6-foot-4 package. He will be the focal point of the Boilermakers season with the ball in his hands on most trips upcourt.

For starters, Williams may be the best playmaking big in the entire country to go along with the fact that he plays some of the best defense against some of the best bigs in the country. Though his best rate is his rebounding where last season he averaged 9.1 total rebounds game and 3.7 of those come off of the offensive glass. Williams is a dominant big man in a conference that the best big men in the country.

Any player that averages 19.1 points and 9.0 rebounds will make fans drool, but the fact that Jackson-Davis puts on a show while doing those things makes him more fun to watch. The star of Indiana is consistent with everything he does. Coming into his junior year this could be his last year as a Hoosier so he will leave everything on the court game in and game out.

(correct, not a single guard) pic.twitter.com/PLhWF238oW

Liddell is an all-around player who can give you 20 points a night while locking up his man on defense. He can shoot the mid-range as smooth as an old-school player all the while being able to get low and have his back to the basket to get easy buckets under the rim. Liddell expanded his range beyond the three-point line so the Buckeyes will have an all-around offensive player to go along with his ability to guard wings and bigs naturally.

After being a phenom as a freshman Dickinson comes back ready to take over being the best player on a top ten team. The Wolverines player can put up 20 points and 10 rebounds nightly and lock up the paint on the defensive end. He’s an all-around big man that can do nearly anything. Dickinson should be a lock to be an All-American and in contention for the best player in Big Ten basketball.

The most purely dominant player in Big Ten basketball, Cockburn plays almost purely in the post locking down the best big men in the country all the while grabbing near double-digit boards and having some of the best statistical performances night in and night out. Kofi will be a national All-American this year and likely put up about the same if not better numbers than Dickinson.