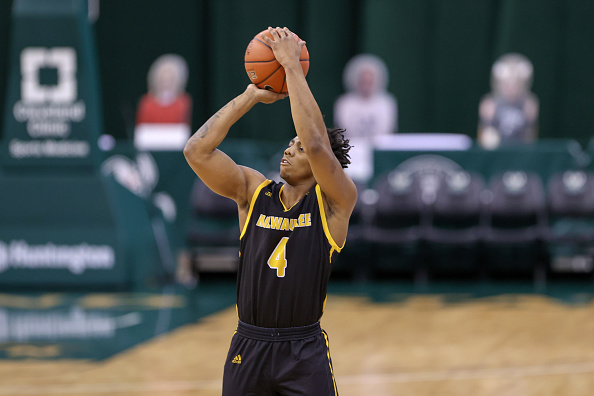 CBB Rank 2021 moves along with Milwaukee basketball next on the list, ranking at number 84.

Milwaukee basketball is looking to shake things up in the Horizon League this season. The Panthers went 10-12 (7-10 Horizon League) last season finishing eighth in a 12-team league. However, things changed in a big way when Patrick Baldwin Jr., son of head coach Pat Baldwin, committed over the summer. Baldwin Jr. is a rare five-star recruit that has found his way to a mid-major league without a transfer. He is going to get his on most nights, but he’ll also need a team around him to help push Milwaukee up the standings.

You can check out teams 85-100 in our rankings right here.

Last year’s leading scorer in DeAndre Gholston is still at Milwaukee. However, it’s going to be tough not to lean on an incoming five-star recruit in a mid-major league. As mentioned before, Baldwin Jr. is coming to play for his dad here, and spurned multiple big name schools to do so. This young man already has a gold medal to his name for the Under-19 World Cup for Team USA. Expect him to do big things right away, especially as he settles into the college game by league play. Baldwin Jr. will be a candidate not only for the rookie of the year, but player of the year in the Horizon League.

Newby has big shoes to fill for Milwaukee basketball. Last year’s starting point guard, Te’Jon Lucas, is off to finish out his career at BYU. Lucas was huge for the Panthers last season, averaging close to 15 points and six assists per game. Furthermore, he played 32 minutes per game. Newby played an average of 17 minutes last season to give him breathers when needed. Now it’s Newby’s turn to run things for Milwaukee. He’ll have DeAndre Gholston and Josh Thomas helping him out, but if things aren’t crisp from the point position, it won’t necessarily matter how much talent you have at other areas of the court.

Milwaukee’s bench doesn’t have much experience aside from Tafari Simms. He averaged a little over 17 minutes per game last year, providing serviceable stats. Vin Baker Jr. will play his first season with the Panthers after spending two years at Boston College. However, neither of those seasons amounted to much up in Massachusetts. Moses Bol will look to add to the bench depth, though he still hasn’t played a game at the Division I level after not getting any minutes at UCF the last two seasons. Behind those three are the other incoming freshmen besides Baldwin Jr. and JUCO transfer Markeith Browning. There will most likely be a heavy reliance on starters in Milwaukee this season.

Optimism is high for Milwaukee basketball solely by bringing son in to be coached by dad. However, surrounding Baldwin Jr. with Gholston and Thomas shouldn’t be understated. That is a potentially dangerous three-headed monster that could be tough to stop in the Horizon League this season. If all three of them average double-figure scoring, expect many wins to come the Panthers’ way.

While we know those three aforementioned players will get their buckets, there is still a lot of inexperience on the roster as a whole, including Baldwin Jr. Donovan Newby will need to step up in his new role. Moses Bol may be thrust into a starting role after not playing a single Division I game to date. Not to mention a bench that is thin on meaningful D-I minutes. It’s safe to say Milwaukee basketball will be improved this season. The question of how much they improve will depend on the development of that depth.

Projected Postseason Finish: Round of 64 exit