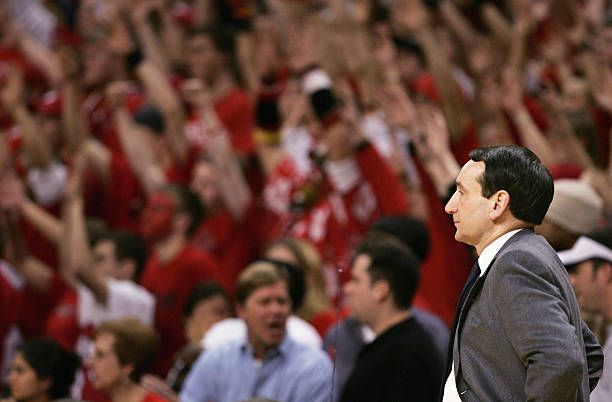 The NBA on Christmas Day tradition provoked the thought of what matchups college basketball fans might like to see on December 25th.

On Tuesday the NBA and ESPN released the annual Christmas Day schedule, taking place December 25, 2021. This year’s matchups are highlighted by the star-heavy Brooklyn Nets against the ageless wonders Los Angeles Lakers. Other games include the Boston Celtics vs the defending champion Milwaukee Bucks and the Western Conference champion Phoenix Suns against Steph Curry and the Golden State Warriors.

NBA fans rejoice at this Christmas tradition, but college basketball enthusiasts are left saying bah humbug, even if it is only August.

When I was a child, and quite frankly I still am, Christmas was full of dreams coming true. Unfortunately, high stakes college basketball games on Christmas are much more of a dream than a reality. That doesn’t mean we can’t entertain how magical it would be.

So call up Rudolph, bake Santa some cookies, and give him this list… of college basketball games to deliver us on Christmas Day in 2021.

I’ll do anything I can to get some sort of a sneak preview of what an Alabama and Texas game might look like once the Longhorns officially join the SEC. The real cards lie on the football field, but a Bama versus Texas game on the hardwood could still draw some intrigue.

Let’s be honest – the fans attending this game would know what the talk of the town is. Sure, it’s two very solid basketball programs, but this is primarily a football move for U of T. I’m sure the “basketball” fans at this game would give us a minuscule look at how the potential rivalry will play out in the SEC starting in 2025.

With all this being said, the Crimson Tide and Longhorns both have more than above-average teams to start the season. ESPN’s Joe Lunardi has Alabama as a 4-seed and Texas as a 1-seed in his most recent way-too-early installment.

So if your question is “Are you more serious about wanting to watch Alabama and Texas in a basketball or a football game?”, my answer is “Yes.”

I can’t think of two teams better fit for a green and red clash on the holiday where those two colors come to fruition. It’s also comical how both teams represent opposite coasts, and this year, it would actually produce a solid contest.

Dana Altman has a serious concoction brewing in Eugene. The Ducks have some of the best talent and depth of any team in the country. The story this year won’t be about Oregon’s fashion statement of jersey colors, but how they look to be a Final Four contender next April.

Odds are St. John’s won’t be in the Final Four, but the Johnnies have the case to make the NCAA Tournament, something they haven’t done since 2019. Mike Anderson will be in year two as head coach, and year one already showed the type of culture he brings into a program. Posh Alexander, Julian Champagnie, Aaron Wheeler, and Stef Smith have me drooling over a team that can finish the season in the top 25.

Sometimes it’s the games you never thought would be good that turn out to be the best in a given year.

Since leaving Memphis for Kentucky in 2009, John Calipari hasn’t looked back. Coach Cal’s never brought the Wildcats to Memphis nor has he invited the Tigers to Rupp Arena.

With UK near the top of preseason polls like usual and Penny Hardaway assembling a Final Four contender in the Bluff City, there wouldn’t be a better year than to reunite old pals from two southern states.

The star power in this game would be the draw. We don’t even need to know who they are now, but these two teams alone could create five-plus NBA all-stars of the future. It’s one of those games that could end a classic the day of but could be remembered even further down the line because of who played in it.

Storylines are big in college basketball and a Kentucky vs. Memphis contest would create unlimited ones.

Something tells me Mike Krzyzewski doesn’t send Christmas cards to any addresses in College Park. This Christmas, it’s time to settle it for good.

It’s the last chance for Duke and Maryland to get together again before Coach K retires. When the Terrapins made the move from the ACC to the Big Ten in 2014, Krzyzewski said:

“You can’t just say you’re going to replicate that in another conference right away. That was already there. It was established over a period of time, and that won’t happen again. That’s not gonna happen again, because we’re not gonna schedule them. It’s tough to schedule anybody when you have 18 conference games. But when we schedule non-conference, it’s usually outside of our conference area, so that we play national teams.”

He’s stuck true to that promise and the has yet to be an NCAA Tournament game between the two either. Coach K is set to retire after the season, so we might have to force the Blue Devils to schedule the Terps for good ‘ole sakes.

Maryland isn’t looking like more than a middle-of-the-pack Big Ten team this season, so it’d only be fair to have it played in College Park. If that happens, you can be sure of a movie scene inside the XFINITY Center.