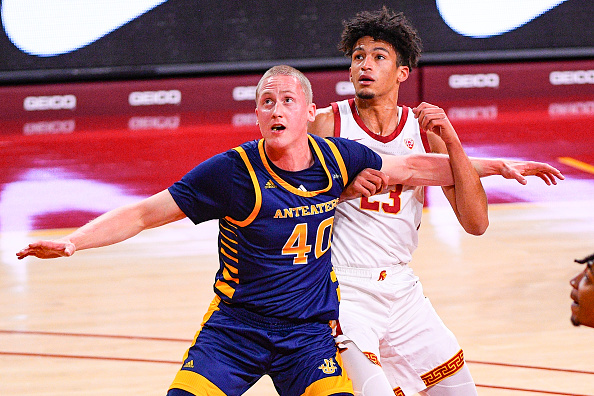 CBB Rank 2021 sees UC Irvine basketball come up next in our countdown, locking in at number 85.

UC Irvine basketball continued the winning tradition that has been established under head coach Russell Turner last season. The Anteaters went 18-9 (13-4 Big West), but, unlike past seasons, they did not represent the league in the NCAA Tournament. UCI will look to reassert themselves at the top of the conference behind star big man Collin Welp, as well as a host of young talent that looks to keep that cycle of winning going.

Welp has been a mainstay for UC Irvine basketball over the last few seasons. He has made first-team all-conference the last two seasons, and was also a key piece on the team that upset Kansas State in the 2019 NCAA Tournament. Welp has seen his scoring and rebounding numbers improve each season as he has mastered his game. However, he has also improved as a defender, making him an all-around player for the Anteaters. Expect UCI to work inside out through Welp throughout the 2021-22 season.

Last season, Coach Russell Turner developed a rotation at the point guard position that saw Isaiah Lee start and DJ Davis come off the bench. Davis proved to be the better scorer, but Lee had a bit more experience. Assuming Lee is the starter again this season, he will have the most on his shoulders to get everything going on the offensive end for the Anteaters. He doesn’t necessarily have to score in double-figures to do that. However, he needs to be able to distribute the ball and continue to improve his assist numbers. If Turner decides to use the same kind of platoon with Lee and Davis, they will be the key to keeping things fluid on the court.

DJ Davis is the main reason why this rating sits halfway. Otherwise, it might be a little lower. Davis averaged a little over nine points per game coming off the bench last season and was the obvious sixth man for UC Irvine basketball. There’s no reason to believe he won’t be a spark once more.

Everyone else behind him did play a bulk of the games last season, but provided minimal contributions. Perhaps that was just due to the overall youth of all of those players. However, they will be expected to do more. No one seems to have more potential than seven-footer Emmanuel Tshimanga. If he can learn how to use his size effectively, he could be another bench threat for this group.

UC Irvine basketball hasn’t had a losing season in eight years. Over the past three, they have become the standard in the Big West, even with last year’s hiccup. There’s nothing that suggests they won’t be in the mix once more, including being a Cinderella in March if they can get there. Collin Welp will be the catalyst for this group. He is a star out west, and further improvement in his numbers will only etch him further in school and league history.

It is how this year’s version of the Anteaters come together around him that will decide on where this team can go. One of the biggest keys will be figuring out who will pair up with Welp  down low with Brad Greene gone. The other key piece is the continued development of the backcourt. Dawson Baker looks like the next potential star behind Welp, and the rotation of Isaiah Lee and DJ Davis came together nicely last season.

One other challenge for UCI is that the Big West is catching up to them. UCSB had been chasing them the last few years, but UC Riverside, Cal State Bakersfield, and UC Davis all looked much better last season as well. Irvine’s success has pushed the rest of the league to be better. Now they have to prove that they are still the team to beat as everyone else raises their game.

Projected Postseason Finish: Round of 64 exit