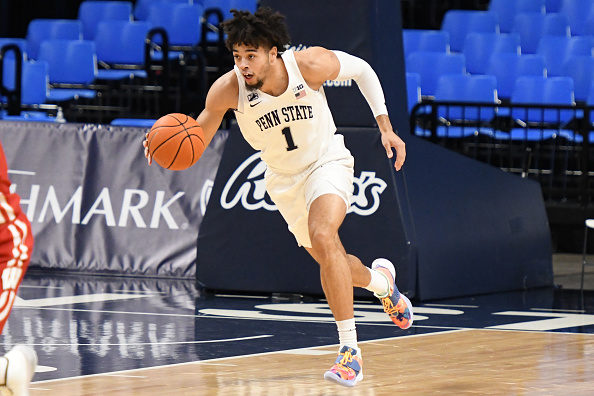 CBB Rank 2021 continues its countdown with Penn State basketball checking in at number 86 on the list.

Penn State basketball came back down off the stellar year they had in 2019-20 to finish just 11-14 (7-12 Big Ten) last season. While the Nittany Lions weren’t an NCAA Tournament team a season ago, they did show fight throughout the season. Six of their 11 wins came against tournament teams, including a sweep of Maryland. Seth Lundy is the Penn State’s top returning scorer, and the core of this program is still relatively young. They will be relying on a few transfers to lead the way in terms of older leadership.

Lundy is the next guy up in terms of carrying the load for Penn State basketball. He showed flashes of his scoring ability last season, including a career-high 32 points against VCU and 31 points against Maryland. With Myreon Jones and Izaiah Brockington gone, Lundy will be expected to shoulder the scoring load. He is more than up to the task, as last year’s points average doubled that of his first season in Happy Valley. As long as Lundy continues that growth, he will be a major key towards the Nittany Lions trying to keep pace in a stacked Big Ten.

There were a few possibilities here with so many new faces, but it is most likely the development of Sessoms in a power conference that could be the key to Penn State contending for a potential at-large bid. Sessoms was a star during his two years at Binghamton, almost averaging 20 points per game as a sophomore. As expected, the adjustment to better competition and a reserve role reduced his production. He should be in the mix for the starting point guard role, battling it out against Gardner-Webb transfer Jaheam Cornwall. Sessoms’ ability to improve in his second year with Penn State will be huge for the team as a whole.

Regardless of whether it’s Sessoms or Cornwall coming off the bench, the guard rotation for this team is in good hands. Where there are more question marks is down low. Whether Western Michigan transfer Greg Lee or Canisius transfer Jalanni White fills the final starting spot remains to be seen. However, neither have experience playing in a league like the Big Ten. The same is true of JUCO transfer Jevonnie Scott. How well those three adjust to the physicality of the league will decide how effective they can be in their reserve roles.

Penn State basketball once again enters a new season looking to replace lost scoring. Furthermore, they will look to develop an identity under new coach Micah Shrewsberry. This upcoming season’s version of the Nittany Lions is leaning on key returning guys to carry the load while filling the gaps with a trio of grad transfers and one JUCO transfer.

Seth Lundy and Sam Sessoms will look to form a dynamic duo, while John Harrar is a guy who can grind down low. Jaheam Cornwall is a nice addition out of the Big South, where he was an all-league player in 2020-21. He will bring another veteran presence to an already solid backcourt. Meanwhile, the rest of the frontcourt relies on new faces. Greg Lee had a breakout year in his lone season with Western Michigan last season and seems like the favorite to start alongside Harrar. Jalanni White’s production at Canisius fluctuated, but he should still give some meaningful minutes.

In the rugged Big Ten, there won’t be any nights off. Earning an NCAA Tournament bid could be a stretch, but the league will provide plenty of profile building opportunities. Still, this seems like a transition year that may set up for fans in Happy Valley to see a more realistic run at a bid in 2022-23.