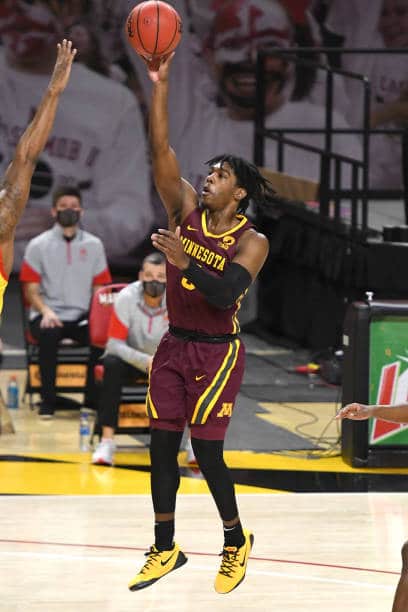 Whether or not Marcus Carr remains at Minnesota or transfers elsewhere is still in question, as he is currently in the transfer portal after withdrawing his name from the NBA Draft.

Carr averaged 19.4 points per game for the Golden Gophers in his junior campaign, adding 4.0 rebounds and 4.9 assists per contest. He was named to the All-Big Ten Third Team.

As of today, the day he announced his return to college hoops, Marcus Carr is the most coveted player in the transfer portal. He can provide immediate impact in his senior season and be a lead scorer wherever he goes. As of now, he has yet to release a list of schools he is interested in.

Although Carr is leaving the option open to return to Minnesota and complete his four years there, it is most likely he will elect to transfer. Richard Pitino is no longer the head coach, and Minnesota is not on track to make the dance this season.

With a new coach, Marcus Carr will have to adjust to a new system, potentially one that does not bode well with his skill set. Although he will be playing among familiar faces, he does not know how well he will perform under new management.

Transferring could do Marcus Carr a load of justice. He withdrew from this year’s NBA Draft because he believes his professional stock can rise with another year of playing at the college level. He now has the ability to choose where he thinks he can perform at the highest level among the best competition.

Going to a high level program gives Marcus Carr the ability to not only play against professional level talent, but also play amongst it. It is crucial for players to surround themselves with players that will help them improve, which seems like a pipe dream in Minnesota.

Playing in March is a huge deal to NBA scouts. Not only can they evaluate how one performs under pressure, but they can also conclude that the player in question is capable of leading his team to the postseason. At Minnesota, it will be a tough journey to the field of 68, as Joe Lunardi does not have the Golden Gophers in his way-too-early field. However, at a different university, Carr can have that postseason experience and evaluation.

No matter the decision that Carr makes, he will succeed next season, and ultimately be selected in the 2022 NBA Draft. However, his upcoming decision holds a lot of importance in terms of how successful he will be in college and the professionals.