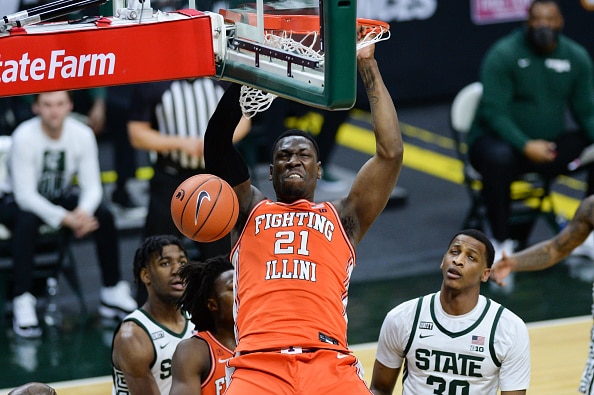 While most of the college basketball world was focusing on the launch of NIL, Jalen Duran re-classifying, or who will withdraw their name from the NBA Draft, there was a literal last-minute transfer portal entrant that could influence the landscape of two teams should he take his talents elsewhere. We are referring to Illinois 7-1 man-child center Kofi Cockburn.

Arguably the nation’s most dominant low-post player, Kofi Cockburn was a mainstay at Illinois and helped the Illini to the Big-10 tournament title and the top-seed in last spring’s NCAA Tournament. He was the only player to average 15 points, nine rebounds, and shoot over 60% from the field. He averaged 17.5 points, 9.5 rebounds, and shot 65% from the field. Oh yeah, he led the nation in dunks with 78 last season.

Cockburn, who was named a Second Team All-American by numerous publications and Wooden Award All American Team selection, had already declared for the NBA Draft, while leaving the door open to return to college basketball. Now, Cockburn has increased his options as he can stay in the NBA Draft, decide to return to play at Illinois, or with this latest move, could return to play college basketball at a different school.

Cockburn has until Wednesday, July 7 to withdraw from the NBA Draft. The deadline to enter the transfer portal without losing a year of eligibility was July 1, so Cockburn waited until almost literally the last minute. He did attend the NBA G League Elite Camp, but he did not get a coveted NBA Combine invitation, which may have led to this surprising change of heart.

Where is Kofi Cocburn going to play next season?

If it’s not the NBA, and he was ranked as low as 96 in ESPN’s latest Draft Rankings (keep in mind the Draft is only 60 picks), there was immediate speculation Cocburn could reunite with former coaches Orlando Antigua and Chin Coleman at Kentucky. Both assistant coaches left the Illini for Lexington this off-season.

Kentucky has completely revamped its roster bringing in several transfers, namely Oscar Tshiebwe (West Virginia), CJ Frederick (Iowa), Kellan Grady (Davidson), and Sahvir Wheeler (Georgia). The Wildcats are also in the mix for one of the top two recruits in Jalen Duren, who has been rumored to reclassify from the Class of 2022 and play college basketball this season.

Kofi Cockburn chose Illinois over UConn, Kansas, St. John’s, and Pittsburgh. UConn is pretty set in the frontcourt but all four schools would certainly be interested if Cockburn decided not to return to Illinois. A host of other coaches would assuredly reach out, regardless if they had a scholarship left to offer. For a player of Cockburn’s ability and resume, schools would figure out a way to get him on campus.

Bottom line, and the NIL may bring him back to college basketball, Cockburn will have plenty of suitors if he withdraws from the NBA Draft over the next week.