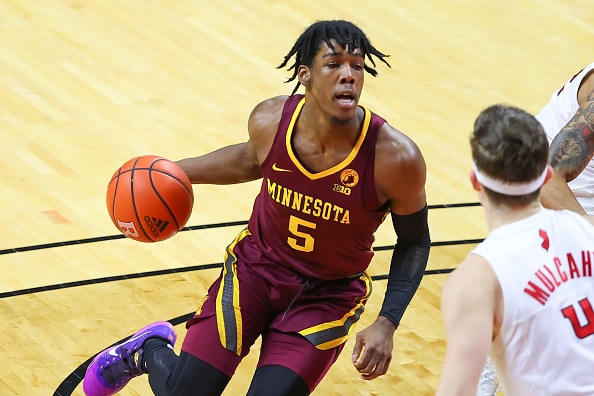 Minnesota erased a six-point second half deficit to defeat Purdue 71-68. The Golden Gophers are now 13-1 at home and picked up only their second win of the season when trailing at halftime. Held in check most of the game, Marcus Carr came on strong down the stretch. Eights of Carr’s 19 points came in the final 1:08 of the second half including a bank-shot 3-point basket to give Minnesota its first lead of the second half and the win. Gabe Kalscheur finished with 16 points, Brandon Johnson added 15 points, and Liam Robbins finished with 11 points and 10 rebounds.

Purdue falls to 13-8 on the season, 8-6 in the Big Ten. The Boilermakers were led with a double-double from Trevion Williams who finished with 24 points and 10 rebounds. Eric Hunter Jr. added 14 points and Zach Edey finished with 13 points. Next up, Minnesota will play at Maryland on Sunday, February 14 and Purdue will host Michigan State on Tuesday, February 16.

Purdue is the only team ranked in the top 25 at KenPom whose team experience is ranked 300 or worse. Purdue comes in at 331 and the next closest top 25 team is Texas Tech at 272. Experience is key this year, but Purdue has found a way to make it work with four freshmen and two sophomores playing a prominent role. Mason Gillis, Brandon Newman, Zach Edey, and Jaden Ivey are the future of the Boilermakers program, but they are making a big impact in their first season on the court. The freshmen mistakes still cost them. A few questionable shot selections and turnovers down the stretch helped Minnesota regain the lead and complete the comeback, but this game will just be more experience that Purdue is gaining to make a run in the NCAA tournament. Sophomores Trevion Williams and Sasha Stefanovic only add to the bright future of the Boilermakers.

Marcus Carr is what makes this Minnesota team run. It is important to establish Liam Robbins on the inside and if Gabe Kalscheur can knock down 3-pointers, then Minnesota is a threat come March. Minnesota started the season 9-1 and went 6-2 in December. Since December, the Golden Gophers are only 4-5. Carr needs to be more assertive. Carr didn’t have the prettiest of games against Purdue, he shot 7-18 from the field and was only 1-5 from 3-point range before he knocked in two in the final 1:08 to win the game.

Marcus Carr makes big time shots and he has proven that in multiple games, but if he is more aggressive and more assertive earlier in the game, Minnesota may not need his late game heroics. Without Daniel Oturu, Carr has struggled to know just when and where to take over games. He wants to be a point guard, get his team shots and allow them to score but it is time that Carr takes the next step. There is a fine line between allowing the game to come to you and enforcing your will, Marcus Carr is walking the tight rope of just when to do both.

3 ) Purdue is a Force Inside the Paint

Entering the game against Minnesota, Purdue held a plus 6.6 rebounding margin on the season and a plus 4.6 rebounding margin in the Big Ten. Minnesota was able to hold strong on the glass against Purdue but the Boilermakers controlled the game because of Trevion Williams and Zach Edey inside the paint. Purdue outscored Minnesota 40-28 in the paint. The Boilermakers were in control of the game despite shooting only 11.8% from 3-point range. Despite their poor outside performance the Boilermakers 43.5% from the field in large part because they shot 55.5% from 2-point range. Williams and Edey are the focal points of this offense and they in large part can win a game based on this merit despite poor shooting performances from deep.