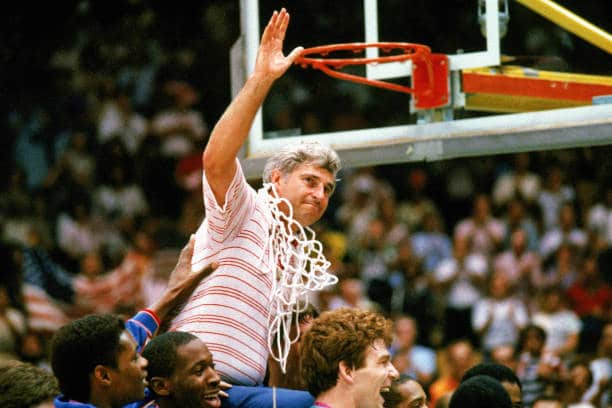 Not all college basketball programs thrive under the limelight, but if these can turn it around, it’d be for the best.

Programs 1-4 on this list have had long years of droughts. Cincinnati doesn’t exactly fall in that scenario but instead is in the most danger of falling off if the John Brannen era doesn’t take off soon.

After 13-year tenured coach Mick Cronin left Cincinnati for UCLA, the Bearcats have been less than spectacular.

To be fair, when Cronin first replaced Bob Huggins (Andy Kennedy was only in town for one year), it took him five seasons to make the NCAA Tournament. However, then his stock rose straight up, with Cronin leading the Bearcats to nine straight dances.

John Brannen’s been in town for two seasons, which have been impacted by COVID-19. That’s a really good excuse, but 20-10 in year one followed by 12-11 last season doesn’t quite beg for many more chances. The Bearcats should be able to contend in the American Athletic Conference each season. In comes Wes Miller, who had a good track record at UNC Greensboro. He’ll be tasked with improving on Brannen’s misfortunes.

Don’t think that Cronin’s legacy is what makes Cincinnati a great program. Before him, it was Bob Huggins and the Bearcats going to 14 straight NCAA Tournaments, four Sweet 16s, and a Final Four. In the late 1950s and early 1960s, Cincy won two National Championships and played in three other Final Fours.

The Bearcats have had stretches of so-so seasons, but they’ve also had as good of an overall resume as any program in NCAA history. This might just be a short-lived bump in the road, but for college basketball connoisseurs, it’d be best if Cincinnati starts making tournaments again.

What makes UNLV a little different than the other programs on this list is the inferior conference they played in. But if you read a history book about college basketball during the 1970s, 80s, and early 90s, you’d be hard-pressed to not read a lot on the Runnin’ Rebels.

Their success is really just synonymous with one coach – Jerry Tarkanian. He led Vegas’ college from 1973 to 1992, having one of the best consistent stretches as any coach ever has. They reached the Sweet 16 or further nine times, including winning the 1990 National Final.

Since then, UNLV’s had some success, but not much. Bill Bayno helped them to two NCAA Tournament appearances in 1998 and 2000. Lon Kruger had the best chance of revitalizing them, coaching UNLV to the Sweet 16 in 2007 and making five out of the following six NCAA Tournaments.

But UNLV has never been able to get even close to how dominant they were during the Tarkanian era.

If there’s any team in real danger of falling down into an unknown territory, it’s the Pitt Panthers.

They always had a respectable program, but really took off in the early 2000s when Ben Howland led them to two straight Sweet 16s. Then Jamie Dixon replaced Howland and the Panthers exploded onto the college basketball scene.

Dixon and the Panthers reached 11 NCAA Tournaments in 13 years. During that consistent stretch of impressive basketball, they reached the Sweet 16 or further three times, making the Elite 8 in 2009.

Since Dixon bolted Pitt for TCU, the Panthers have been one of the worst teams in Power Six college basketball. Five seasons have gone by and they’ve yet to reach the NCAA Tournament and are already on coach two. Kevin Stallings was replaced by Jeff Capel, who’s arguably already on the hot seat with a 40-48 record in three seasons.

What’s even more concerning is that Pitt hasn’t just slid off a bit – they’ve tumbled off a cliff. The Panthers went 21-12 in Dixon’s last season in town and while his last few years weren’t anything overly special, things have gotten much worse in the Steel City. All five seasons without Dixon have resulted in losing records, something that hasn’t happened to Pitt basketball since 1998.

Don’t get me wrong – Pitt basketball isn’t and never has been a blue blood program. Its lone Final Four appearance came all the way back in 1941. But for a program that ranks top 50 all-time in wins and was one of the top teams in college basketball during the first 15 years of the 21st century, Pitt basketball seems to be in big trouble.

The case here is that Indiana hasn’t been good for quite some time. The Hoosiers haven’t been a consistent NCAA Tournament team for almost two decades.

On the flip side, Indiana basketball was a blue blood program from the early 1970s until the early 2000s. During that time they were at worst an NCAA Tournament team with a good seed and at best a National Champion. Three of the Hoosiers’ five chips came between 1976 and 1987.

Almost all of the height of Indiana basketball can be credited to Bobby Knight. In fact, of their 39 trips to the Big Dance, over 60% were when Knight was the head coach.

The biggest reason for the angst of Indiana basketball fans is the fact that they’ve come close to replicating those good ole days, but it never lasts for an extended period.

When Mike Davis replaced Knight, the Hoosiers reached four of six NCAA Tournaments. However, other than a loss in the 2002 National Championship, the others all resulted in losses before the second weekend.

Davis turned into Kelvin Sampson. His recruiting violations forced Dan Dakich into the head coaching role. But his interim role didn’t turn into a permanent role, with the Hoosiers instead hiring Tom Crean. Crean lasted one year short of a decade, which was probably because of three trips to the Sweet 16. But five tournament misses in nine years didn’t cut it.

Up next for Indiana? Archie Miller, who was fired this year, with Mike Woodson now becoming the sixth head coach for the Hoosiers since 2000.

Woodson will have a tall task of restoring a once-proud program to prominence. Part of the struggle is Indiana relishing all of its success into one coach. They’ve had moments since then, but have yet to match what Knight was able to accomplish.

The biggest gripe of having Georgetown basketball above Indiana is the Hoosiers’ five championships to the Hoyas’ one. Georgetown is also largely synonymous with one coach, but it’s reached the Final Four more recently than Indiana and has also had much less success in recent years, creating a much more noticeable fallout.

John Thompson Jr. coached the Hoyas from 1972 to 1999, never coaching any other team in his career. He led Georgetown hoops to 20 NCAA Tournaments, resulting in almost 600 wins and a National Championship in 1984.

On a slightly smaller stage, Georgetown was a major player in the Big East, which at its height was the biggest and baddest conference in college basketball. The Hoyas still have the most Big East Tournament Championships (8) of any team. Despite winning it this past season, its last came all the way back in 2007.

When Thompson retired, Craig Esherick came in and accomplished nearly the opposite. His Sweet 16 in 2001 was also his only tournament appearance in five-and-a-half seasons as head coach.

However, John Thompson III was the next in line and was actually a lot better than people give him credit for. Sure, he didn’t and really could’ve never lived up to his father. But he still reached a Final Four and eight NCAA Tournaments in 13 seasons. Again, nothing close to Big John, but nothing shameful, and with the majority of Georgetown’s seeds in those tournaments being in the top four lines.

When he was outed, Patrick Ewing was named as the new head coach of Georgetown basketball. His claim to fame was the phenomenal Big East Tournament run en route to the NCAA Tournament this March. However, a record hovering just barely above .500 with no at-large bids is not nearly what Georgetown expects.

The Big East is only getting more challenging with UConn back in the conference, but if Georgetown can ever find a way to even get back to how they were during Thompson III’s reign, college basketball would rejoice.