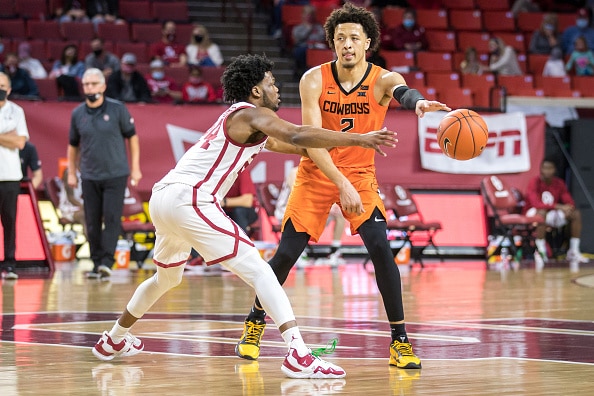 The lottery is complete, and the Detroit Pistons will have the first option at which young star will be the face of their franchise.

The Pistons, followed by the Rockets and Cavaliers, will round out the top 3, setting up this 2021 NBA Mock Draft, which will feature all lottery teams.

Detroit fans are dancing right now, as they will draft a player who if he lives up to his potential, can rival Isiah Thomas as the best Piston point guard of all time. Now, there’s a long way to go until then, but Cade’s ability to score, rebound, pass, and make his teammates better is an elite and rare combo for any player to have. At 6’7, he also possesses elite height for a point guard. He will join Killian Hayes, the Pistons Top 10 point guard draft pick last year in the backcourt, and emerging star Jerami Grant can help make the Pistons a fun team to watch next season.

Houston will have a tough decision here between Green, Evan Mobley, and Jalen Suggs. They will ultimately go with Green, who has arguably the best upside of any prospect not named Cade Cunningham. He is a pure scorer, and could average 25 PPG in no time, similar to a former Rocket in James Harden. He may not be ready right away, but Rockets are hoping, and will most likely have a max-worthy player on their team the next few years in Green. He will join a young core of Christian Wood and Jae’Sean Tate, who are looking to turn around the program and make them contenders once again.

While Mobley is the better player, the Cavaliers have Jarrett Allen, a young emerging center that fills that need for them. The Garland-Sexton combo improved, but isn’t good enough to take the Cavaliers anywhere, plus Sexton is a restricted free agent after this season. Suggs can change this team’s culture and be a leader from Day 1, as we saw at Gonzaga, and he may be the best two-way player in this draft with his elite defense in the passing lanes. A young core of Suggs, Allen, Isaac Okoro, and one of those other guards can be fun to watch, and Suggs can be that guy for them.

Mobley is the perfect NBA player in today’s game. He can score inside and out, rebound at a high rate, has decent vision, and clogs up the paint with his impressive wingspan. There is very little he can’t do and is bound to be a star. The Raptors really struggled at the center position last year, so sliding Mobley into that slot can make them contenders in the Eastern conference once again very soon.

Kuminga has an insane amount of raw talent, and like his former teammate Jalen Green, the sky is the limit for his potential. For a team like the Magic who are rebuilding, Kuminga is a perfect fit since he needs a year or two to develop, and the Magic will give him the keys to do so. The forward combination of him and Jonathan Isaac is deadly, and with other talented young guys in Cole Anthony and Markelle Fultz at the guard spots, the Magic could have the best young core in a few seasons.

Barnes has risen up the draft boards recently thanks to scouts noticing his potential. His nearly 7’3 wingspan is shocking, and his per 36 minutes stats are solid. He hit some big shots at Florida State and is NBA-ready. OKC is loaded at guard, with Kemba Walker, Shai Gilgeous-Alexander, and Lu Dort all producing at high levels, so adding Barnes to the team to pair with them is a no-brainer. The Thunder have a bright future ahead, and Barnes is yet another piece of that puzzle.

If Davion Mitchell was a little taller, he could easily make a case for the top pick. He has tremendous speed to get to the basket, incredible shooting ability knocking down nearly 45% of his threes, and is a good facilitator. That’s just offense though- he was the best defender in college basketball last season. The Warriors were really missing a solid backup guard last year, and with Klay Thompson coming back, the splash brothers might receive a new member with Mitchell. The Warriors received this pick from the Minnesota Timberwolves as part of the DeAngelo Russell trade.

This is the second of the Magic’s top 8 picks, thanks to the Nikola Vucevic trade made with the Chicago Bulls. The Magic have at least one young player at every position, so right now it’s just about who will seperate themselves. Like Kuminga, Johnson is a project with high upside if he can adjust to the NBA level. He showed some positive flashes in college, giving the Magic hope that him and Kuminga can be teammates for a long time.

The talent is there for Johnson, it’s just the determination that remains a question mark. If he can remain devoted, Kings get a steal with Johnson. The Kings have great guards with Deaaron Fox, Tyrese Haliburton, and Buddy Hield, and the Marvin Bagley experiment has probably come to an end. Johnson has similar potential to Bagley, so if he can make it work then the Kings have a shot of the playoffs next season.

Moody had some moments last year at Arkansas where he looked like he could be a 10 year all star. He can score like a pro, but needs to work on his other aspects to really be a special player in this league. The Pelicans really need a guard, with Lonzo Ball all but gone and Eric Bledsoe not producing at a high level anymore, so Moody is a great fit. He will be paired with Brandon Ingram and Zion Williamson, two high level scorers which may affect his touches.

I mean, if you just look at the stats, you can see why the first foreign player taken will be in the Top 11. Sengun is an efficient scorer and torched teams at just 18 years old. The Hornets have a great piece at each position, and with no disrespect to Cody Zeller, he is the weak link in that starting lineup. Putting in a younger player with more potential could be a great sign for the Hornets, who already improved last year thanks to the development of Lamelo Ball, Terry Rozier, and Miles Bridges. The Hornets are a playoff team next season, and Sengun could make them be more than that if he can contribute right away.

The only reason Wagner drops this far is because the teams ahead of the Spurs don’t have a forward as a top priority. Wagner is a do it all guy, and showed a lot of progression last year at Michigan. Demar Derozan is most likely walking, and they have a lot of young talent at guard, so adding a forward will help the Spurs. The Spurs are stuck in the middle right now, so hopefully a guy like Wagner can push them back into a playoff spot.

Giddey is an insane passer, and at 6’8, he can play guard or forward. He needs to improve his shooting, and if he does he could be like another tall point guard from Australia, Ben Simmons but better. The Pacers are stuck in the middle, and have dealt with the injury bug all season, so having a healthy team next year plus a guy like Giddey who makes his teammates better could be a winning combination for the Pacers.

Kispert was amazing last year, especially from deep and was arguably the best player in the regular season for the national champion runner up Gonzaga bulldogs. He struggled a little in the tournament, but that isn’t a sign to worry for NBA teams. The Warriors get another scorer off the bench with Kispert really strengthening their bench squad and providing replacement options if the Warriors aging stars need days off.