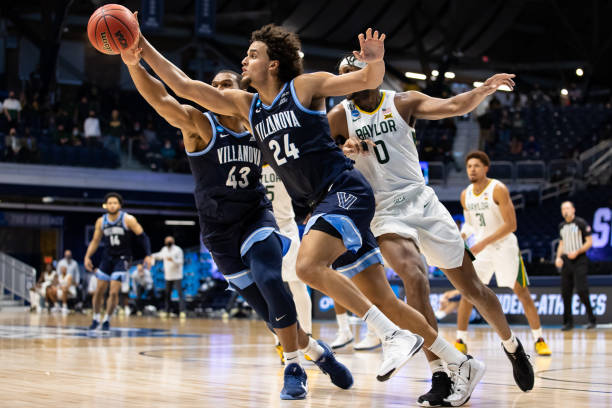 The Big East-Big 12 Battle dropped 10 games for the annual early-season challenge. These three games stick out above the rest.

With record-setting transfers becoming ever-so-hard to keep track of, it’s about the constants in life. In the college basketball world, conference challenges are easier to follow (unless realignment is right around the corner and we don’t know it yet).

The matchups for the Big East-Big 12 Battle are now out, as reported by Jon Rothstein and College Hoops Today. The dates were released a day later on June 2.

Right off the bat, Villanova and Baylor could realistically be a Sweet 16 matchup or even further down the line in the 2022 NCAA Tournament. But there are other games that catch the eye as notable non-conference games.

This game might have the most storylines of any in this year’s Big East-Big 12 Battle. It starts with the obvious in Chris Beard coming to Newark, NJ for a marquee matchup before Big 12 play.

Looking at the makeup of both of these teams, and they have serious NCAA Tournament potential, yet drastically different rosters from a year ago.

The home Pirates will be without Co-Big East Player of the Year, Sandro Mamukelashvili. Also gone is starting point guard Shavar Reynolds. But back in South Orange is potential Big East POY Jared Rhoden, fifth-year player Myles Cale, and Bryce Aiken, running it back for his sixth season of collegiate basketball. The Pirates’ biggest transfer is Kadary Richmond from Syracuse.

The Longhorns also lose a few program legends with both Matt Coleman and Jericho Sims. Returning to the Longhorns are a slew of experienced players in Andrew Jones, Courtney Ramey, and Jase Febres. Texas potentially brings in the best transfer class of any team in the NCAA, with Timmy Allen, Devin Askew, Christian Bishop, and Dylan Disu all coming in from power-six conferences. Together, those four averaged over 50 points per game last season.

That team makeup on the road in a fearless New York City fanbase arena should make for an interesting game that’s actually never been played before. My gut has the Longhorns, but it’ll be well worth the watch.

Hats off to these conferences for recognizing an old-Big East rivalry and making it a part of this challenge. It’ll also pit two fiery coaches against each other in another matchup of potential NCAA Tournament teams.

The Danny Hurley versus Bob Huggins coaching matchup is really where we have to begin looking at this matchup. Hurley played at Seton Hall in the Big East before now coaching UConn in the same conference. Huggins has been at West Virginia since their Big East days, which adds even more intrigue for fans of the conference since its heyday.

On paper, both teams have competitive rosters heading into 2022 that should be in contention for the 2020 NCAA Tournament.

For UConn, replacing James Bouknight will be the tallest task. Also gone are Josh Carlton and Brendan Adams. But set to play next year for the Huskies are a solid list of returners in Andre Jackson, RJ Cole, Tyrese Martin, Adama Sanogo, and Isaiah Whaley. UConn also brings in a good crew of newcomers that should gel well and potentially help the Huskies compete for a Big East Championship in another so-so year for the conference.

For the Mountaineers, Taz Sherman and Sean McNeil will carry the brunt of the load. Sherman just recently decided his fate for next season, after some thought he would potentially opt to play professionally instead of returning to Morgantown.

Like Seton Hall and Texas, UConn and West Virginia have question marks heading into next season. However, the sheer battle between Hurley and Huggins in a rivalry that’s been long lost for almost a decade since it was a yearly occurrence. I tend to like the Pirates’ and Longhorns’ chances throughout the season a bit better, but as far as a matchup that will get fanbases rilled up, this one is it.

A rematch of this past tournament’s Sweet 16 game, Baylor and Villanova will run it back on December 12. It’s the marquee matchup of this year’s Big East-Big 12 Battle and will easily be one of the best non-early season tournament games of the entire non-conference schedule.

The two teams actually faced off in 2019 as well, with the Bears coming out on top.

The Wildcats will have National Championship contenders written all over their name once again to start the season. Point guard Collin Gillespie is tried and true and has backup with Jermaine Samuels, Justin Moore, and Caleb Daniels. Two four-star recruits will also join Jay Wright and the Wildcats, potentially giving them a sweet bench to utilize. ESPN recently ranked the ‘Cats second in another early-season poll.

In that same poll is Baylor, who ESPN has slotted at seventh. The Bears starting lineup is a mix of returners and newcomers. Adam Flager, Matthew Mayer, and Jonathan Tchamwa Tchatchoua will try and lead the current champions to another successful season. They’ll be joined by former Georgetown star James Akinjo and Kendall Brown, the number 15 recruit in the ESPN 100.

At least coming into the season, these two teams are above the previous four. They look like serious contenders on paper and will almost certainly be dancing in March, barring some crazy occurrence or injury. The Bears and Wildcats are used to headlining and will be for this event as well.