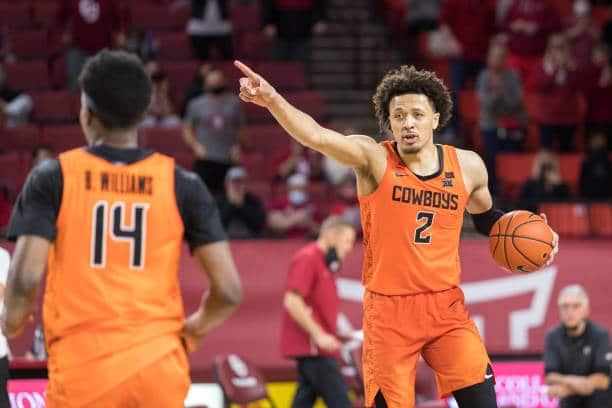 With Baylor cutting down the nets for the first time in school history, the college basketball season has come to an end and NBA Mock Draft season has started.

For most fans, they will sit and patiently wait for the day that it starts up all over again, but some will look to see where these college stars will end up in the NBA. Here is an NBA Mock Draft of the full lottery along with stats.

What Cade did in college is pretty incredible. The first team All-American came into the season with high expectations and outperformed them. His ability to score on all levels and make the shot when it matters is All-Star level already and is a no-brainer top pick. The Timberwolves are loaded at guard, with DeAngelo Russell, Malik Beasley, and Anthony Edwards all producing, but the Timberwolves can’t pass up on a potential generational player in Cade.

Everyone will remember him for the incredible buzzer-beater in the Final 4, but Jalen Suggs is a special player. On the offensive end, he scores at an efficient rate and can knock down the three as well, and on the defensive end, he is a terror in the lanes and can lock down his opponent. If Suggs gets in transition, he is scoring or finding a teammate every time, something that will translate extremely well to the next level. The Rockets really need a point guard of the future, with John Wall and DJ Augustin being their options, and Suggs will do a great job in the Rockets system.

Any other year, Mobley would have been a lock for the top pick, but this year’s talent is so incredible he finds himself at #3. Like Suggs, Mobley is elite on both sides of the floor, with great touch around the rim, surprising athleticism for his height, and an absolute force in the paint on the defensive end. If an opponent is driving in the paint, Mobley is either sending it back or creating a miss for his team. The Pistons just paid Mason Plumlee a surprisingly large amount of money, but Mobley is a talent the Pistons can’t pass up and will do well in the frontcourt with Jerami Grant.

Coming in at #4 in the NBA Mock Draft is Jalen Green. Green proved that he is a valuable player and a really solid scorer and arguably has the best potential of anyone in this draft. He looked comfortable going up against the competition and could average 20 PPG every season, especially if he’s drafted to the Magic who don’t have a star anymore. Magic are in full rebuild, but have an immense amount of young talent and will be a fun team to watch if they draft Green.

Kuminga showed flashes that he could be a special player, but has a long way to do that before he hits that. His shooting numbers were very subpar in the G-League, but he showed off his high basketball IQ, which is what any team wants in a player. The Wizards don’t have a direct need besides center, so they will take the best player available which is Kuminga, and he could eventually be a big contributor on a Wizards team that is a piece away from a playoff run.

The numbers might not be impressive, but that is because he was the 6th man in Leonard Hamilton’s balanced playing system. Barnes plays more like a point forward and is great at getting to the rim and running in transition. Last year, we saw Florida State’s 6th man Patrick Williams go fourth overall, so Scottie will be following in his footsteps here. The Cavs need forwards as Kevin Love is aging and not at a productive level, and the Cavs need a leader on the floor which Barnes can contribute to.

Keon Johnson has come a long way this season. After scoring under 14 points for the first eight games of his career, he ended the season scoring 14 or more in five of the last seven games. He has a lot to work on in his game, but the potential is there and OKC is fully aware of that. While it seems that Oklahoma City has a great young backcourt in Shai Gilgeous Alexander and Luguentz Dort, having another great guard in Johnson will help the rebuild for sure.

Uconn was a completely different team when Bouknight was injured this season, going from a possible NIT team to a high seed in the tournament when he played. He can score at will at can rebound well for his size, making him a great option. With Kyle Lowry either on the way out or seeing his minutes reduced, Fred Van Vleet will move to the point guard spot opening a spot for Bouknight. The Raptors need a guy who can produce now, and he can fill that role for them.

Coming in at #9 in the NBA Mock Draft is Jalen Johnson. Johnson faced a lot of backlash after leaving Duke for not getting the playing time desired, lowering him in a lot of NBA Mock Drafts and questioning if he would feel the same once he gets to the NBA. With that being said, the talent is still there, as the Top 10 recruit out of high school showed how good he can be with a 19 point 19 rebound game and a 24 point 16 rebound game. The Kings have really solid guards, but their forwards and centers besides Harrison Barnes are average or below average, so Johnson can contribute to one of the most fun teams to watch in basketball.

Leading a team to an Elite 8 appearance is impressive enough, but to do it as a freshman shows how good Moody is. He is very similar to Bouknight in terms of production but is two years younger making him an exciting player to have. With Lonzo Ball’s future with the team unclear and Eric Bledsoe no longer being the player he was, the Pelicans need a young guard to pair with their dynamic duo of Brandon Ingram and Zion Williamson. Moody will have a short trip from Arkansas to New Orleans if he is selected there, which the Pelicans should do in a second if his name is still on the board.

The Magic get this pick in their trade with the Chicago Bulls revolving around Nikola Vucevic. Wagner will join Jalen Green as a potentially elite young core of the future. Wagner is a swiss army knife player, doing a little bit of everything on the offensive and defensive end. The Magic have a ton of young players, and Wagner will have the chance to play right away on this Magic team.

Corey Kispert is an absolute sniper from behind the arc, shooting 44% from three at a high volume. The first-team All American has shown time and time again his ability to take over and knock down two or three three pointers when needed makes him so valuable. Kispert is very similar to another player on the Pacers, Doug McDermott, but a lot younger. Pacers can use a guy like him, especially if TJ Warren’s season ending injury hinders his future play.

If anyone raised their draft stock in the tournament, it was Davion Mitchell. Every game, he was able to knock down a big three, use his unmatched speed off the dribble, and locking up the other teams best player every night. If he wasn’t 22 years old, he would be seriously considered for the first pick. Klay Thompson is coming off two season ending injuries and is getting up in age, so replacing him with a great young guard in Mitchell can propel this Warriors team back to a contender.

It’s the year of the 6th man! Wrapping up the NBA mock draft, Kai Jones becomes the second 6th man for their team to get drafted in the lottery, joining Scottie Barnes. This is absolutely a potential-based pick, as Jones has the scary athletic ability for his height and frame. He’s efficient from the field and can become a defensive beast. If anyone can develop a player like Jones, it’s Gregg Popovich and the Spurs need a big man in the future. If he pans out, the Spurs can have a really talented big down low for a long time.