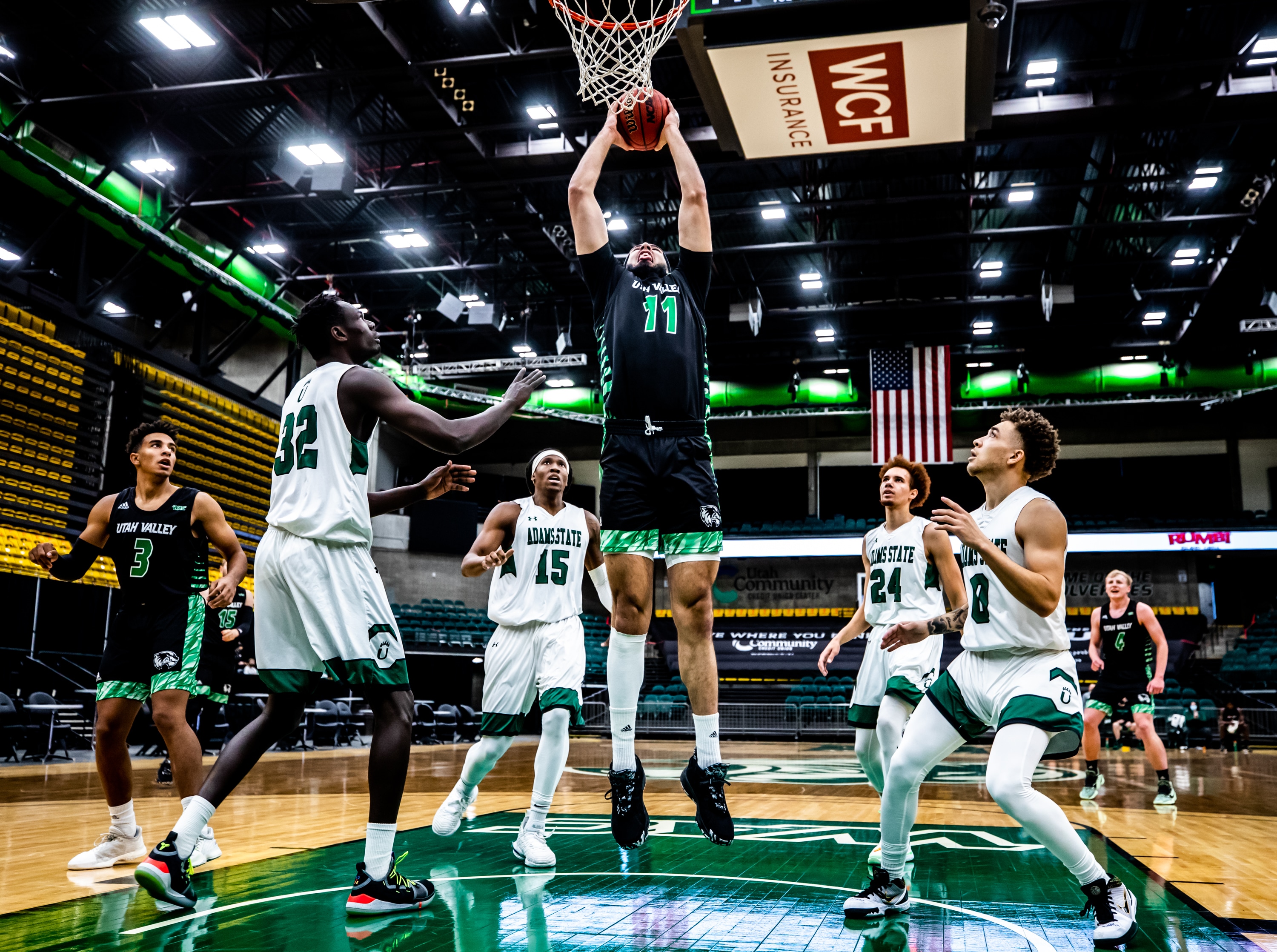 Since 1985-1986, no one could reach the feat of averaging 15 rebounds per game, until Fardaws Aimaq.

The 6’11 center made history this season when he averaged exactly 15 RPG for the Utah Valley Wolverines. This, plus 13.9 PPG and 1.7 BPG were enough to earn the junior from Vancouver Western Athletic Conference Player of the Year honors. I talked to Aimaq about this historic season, his past seasons, and his potential NBA future.

Contents hide
1) After one season at Mercer, what made you decide on Utah Valley?
2) You sat out one year due to transfer rules. How was that experience and what did you learn from this?
3) You obviously had a breakout season this year. What was one thing you improved on the last offseason?
4) What was it like playing in this COVID season and what was the biggest positive and negative from you from that?
5)You led all of college basketball in rebounding this season at 15 a game. How have you been able to be so dominant on the boards?
6) You recently declared for the NBA draft. What was the reason you decided to do so?
7) Congrats on winning conference player of the year this year! What was that feeling like when you found out?
8) You’ve never missed a three in college, going 2-2 in two years. Do you plan on shooting a few more next year whether in the NBA or back in college?
9) What is one thing you want to work on this off-season?
10) Do you have any individual goals for next season, whether in college or at the pro level?

1) After one season at Mercer, what made you decide on Utah Valley?

Fardaws Aimaq: The reason I wanted to transfer in the first place is because my coach got fired when I was at Mercer. Utah Valley came into the mix about a couple of weeks in. To be honest, they weren’t high on my list, I had other schools that I was plenty more interested in and that I wanted to go to. The one thing that I did do is visit Utah Valley first so once I got there I wanted to do the visit and then know where to go after that.

Talking with them initially, (Utah Valley Head Coach) Mark Madsen wasn’t even there and I talked to the other coaches. Mark had just gotten the job so I just started talking to him and he started recruiting me pretty hard and I respected him as a coach and as a player in the NBA so I was intrigued. He let me know that he was the guy for me and would help me get my game to a level that I need to get at for me to achieve. He was the biggest factor for me coming to Utah Valley.

2) You sat out one year due to transfer rules. How was that experience and what did you learn from this?

Fardaws Aimaq: I learned a couple of different things. I think the biggest one for me was learning how to work efficiently over working hard. As you sit out, learning how to work hard while being efficient was one of the biggest things. I always had a schedule or plan for how I wanted to do things and always wanted to figure out what I was doing for the day. For example, if I had weights one day, then I’d schedule my basketball workout after that so I can keep my workouts as efficient as possible. I also learned the game of basketball better because I’m watching the game instead of playing. You become like a coach at the same time because you’re helping your teammates out on the sideline, calling different plays, and becoming a better leader.

3) You obviously had a breakout season this year. What was one thing you improved on the last offseason?

Fardaws Aimaq: As of now, expanding my outside game, that’s my biggest goal right now. I also worked on my body and getting stronger, bigger, and faster. Hopefully, it all pays off in November.

4) What was it like playing in this COVID season and what was the biggest positive and negative from you from that?

Fardaws Aimaq: I think there were a lot of positives in terms of the season. Looking at it as a whole, I think this year was good due to the fact that a lot of people got to figure out exactly who could do what. There were a lot of nights where guys would be out with Covid stuff, so other guys would have to step up. These guys would have good games and then all of a sudden they’re in the rotation. Before these guys may not have had the chance and this situation gave them that chance to step up and do something.

5)You led all of college basketball in rebounding this season at 15 a game. How have you been able to be so dominant on the boards?

Fardaws Aimaq: I think my biggest thing is having a knack for the ball and understanding how to rebound. Putting that together with some of the stuff I have naturally like my quick hands, my size, and being able to position myself and be in the right places and get off the ground quickly to grab rebounds are the keys. A lot of it comes down to understanding how to rebound the basketball at a higher rate and really wanting the basketball because rebounding in basketball to me is just effort. If you want to get the basketball you can get it, it doesn’t matter if you’re 6’11 or 5’11. It’s in the category that not a lot of guys want to do it, but it’s gotta be done, especially on championship teams someone has to do it. I told coach that I’m willing to do whatever I need to do to win, and that’s one of the things I do.

6) You recently declared for the NBA draft. What was the reason you decided to do so?

Fardaws Aimaq: The biggest reason for me is that after having the year I had, I wanted to receive feedback from NBA teams. It’s going to be a big key for me to receive feedback and then take that feedback. Whether that means having a shot this year, or they say to go back to school another year and do these things so you can fall onto people’s radars will be a big key for me. To have that opportunity to do that, I’m blessed and thankful that I’m able to put my name in the NBA draft and have teams work me out and get feedback, and then see where to go from there.

7) Congrats on winning conference player of the year this year! What was that feeling like when you found out?

Fardaws Aimaq: The feeling I had was excited to have an opportunity to be recognized for that award is obviously huge. More than anything it is a reminder that all the work you put in the last couple of years is worth it. It’s not just this year, it’s from all the years leading up that you’ve been building up on your resume. I see it as a building block because it is nothing more than an accolade, so obviously it’s a great feeling but the goals that I have a much bigger than winning conference player of the year. At the end of the day, I want to play in the tournament which is something I think we can do. I’m still not done yet, and there’s a lot for me to do at the individual and team levels.

8) You’ve never missed a three in college, going 2-2 in two years. Do you plan on shooting a few more next year whether in the NBA or back in college?

Fardaws Aimaq: I think I have the trust from the coaches and the trust from myself that I can go into that. I want to work on it a lot this offseason. It’s going to require a lot of work and a lot of hours in the gym, which I love. I want to be dedicated to the grind and have the understanding to build confidence and be confident in my shot.

9) What is one thing you want to work on this off-season?

Fardaws Aimaq: Besides the outside game, I want to get stronger, and develop into an NBA body will be the biggest key. I want to cut down a little bit and get quicker and stronger. Having the ability to switch onto a guard and move my feet well will be important. I’m excited about the challenge, to put the work in, and to see what comes from all of this.

10) Do you have any individual goals for next season, whether in college or at the pro level?

Fardaws Aimaq: At Utah Valley, my individual and team goals would be to win as many games as possible, make the tournament, and let everything else ride out with it. At the pro level, it would be the same exact thing. When you win, not only are you recognized but so is your whole team, which is a much better feeling than playing well but losing games. I want to win at whatever level I’m playing at and try to win a championship.