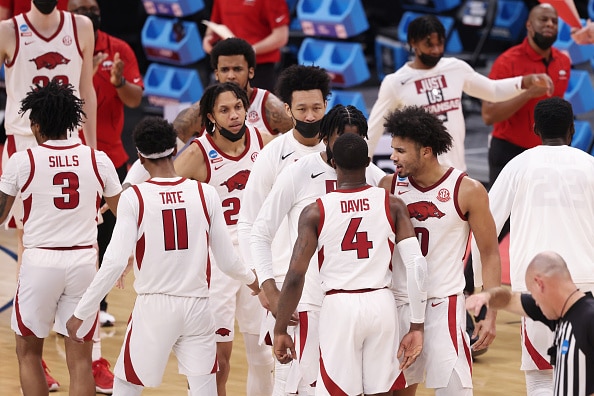 Arkansas basketball narrowly escaped Texas Tech in the Round of 32.

Arkansas basketball led by as many as 13 in the second-round matchup, but Texas Tech battled back to cut the Razorback lead to one with 5:32 to play.

Arkansas then got the lead to eight, but the Red Raiders stormed right back, cutting the lead to just one yet again with two minutes to play..

YOUR ARKANSAS RAZORBACKS ARE GOING TO THE SWEET 16 pic.twitter.com/3p9sFRtaeR

Justin Smith led the Razorbacks with 20 points, and Davonte Davis, Jalen Tate, and Moses Moody each added 15 points. Jaylin Williams was the only Arkansas starter to not reach double figures in points, scoring only one, but he snatched 10 rebounds to lead the team.

1) Texas Tech had its Chances

Down one, Texas Tech had a chance to take the lead for the first time in the second half but failed to convert.

It again had an opportunity with the shot clock off to bring the game to overtime, but Kyler Edwards missed a layup right before the buzzer sounded after shedding the defender and getting an open look.

Texas Tech’s leading scorer Mac McClung, averages 15.3 points per game on 42% shooting, to nine points on just 2-6 shooting. McClung could not get free to get his shot off, which is a credit to the Arkansas defense.

McClung only shot six times, less than half of his season average. He also hit one of two three-pointers, despite averaging 4.8 attempts from three per game. Taking McClung out of the game forced Terrance Shannon Jr. to take over the leading scorer duties, and despite scoring 20, he shot just 6-16 from the field.

It won’t be talked about, but Devo Davis completely denying Mac McClung the ball for 94-feet just won Arkansas that game and sent them to the Sweet 16 https://t.co/WW2LxpJjQq

Arkansas put four players into double figures scoring, combining for 65 of the Razorbacks 68 points. They also shot a combined 48% from the field.

Spreading out scorers is key in March Madness, as anyone can get hot or cold at any given time. Relying on just one guy can be detrimental, which is exactly what happened to Texas Tech, causing the loss.

Arkansas moves on to face the winner of Oral Roberts and Florida next week in the Sweet 16. March Madness continues to impress in 2021.

One thought on “March Madness: Arkansas Basketball Holds on to Beat Texas Tech”