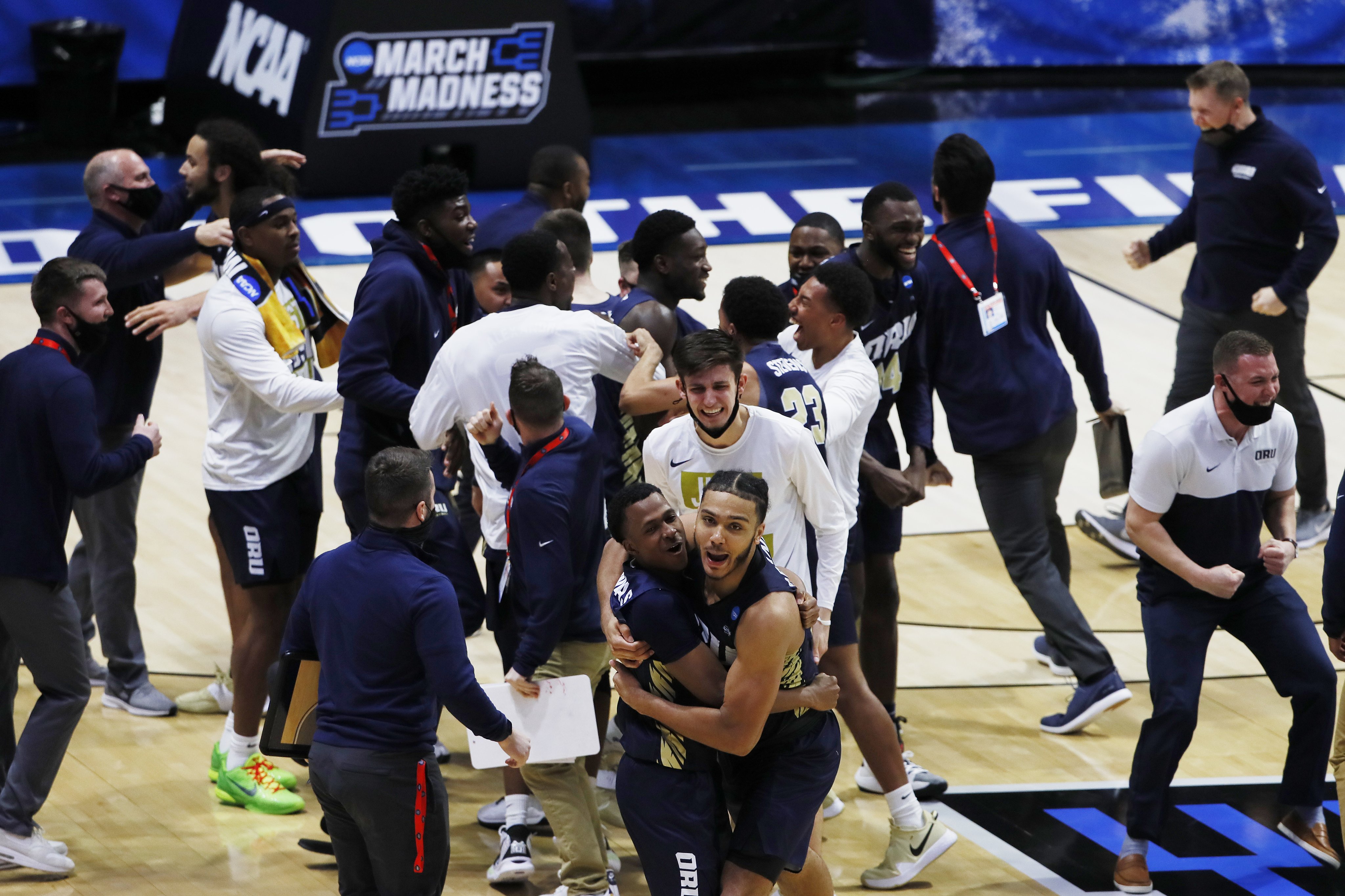 March Madness lives up to its name once again with Oral Roberts basketball knocking off Florida for a Sweet 16 appearance.

March Madness continues to live up to its name into the second round. Oral Roberts basketball and Florida both won overtime games in the first round to reach the Round of 32. The Golden Eagles quickly became America’s darling as the lowest remaining seed in the tournament. They didn’t disappoint, keeping Cinderella’s slipper on by stunning Florida 81-78 on Sunday night. Once more, Max Abmas and Kevin Obanor paced ORU with 26 and 28 points, respectively. Florida had four starters score in double figures, led by Tre Mann‘s 19 points. Oral Roberts is making its first Sweet 16 appearance in program history, and just the second by a 15 seed in NCAA Tournament history.

If you know the story of Cinderella, you know how important of a role magic plays in it. That story has a happy ending, and the same can be said for Oral Roberts thus far during 2021’s version of March Madness. The Golden Eagles danced into the second round after dispatching an Ohio State team that had just lost in the Big Ten final five days prior. Then, they had a terrific comeback effort to pull out a win over the Florida Gators, placing themselves further into the country’s hearts and the Sweet 16.

For most of the second half, it looked as though the Gators were going to be able to maintain the ten and eleven point advantages they had built. Both teams were trading buckets, and it looked like midnight was going to strike. However, Oral Roberts began to methodically chip away before taking a one point lead with just a few minutes remaining. From there, they hit some key deep balls and iced things away from the free-throw line, shooting 19-23 from the charity stripe overall. It’s the Golden Eagles’ clutch performances from these two areas that have them joining Florida Gulf Coast as the only 15 seeds to advance past the first weekend.

2) Florida let it slip away

Perhaps it’s the aforementioned magic that caused Florida to lose this game. However, the bottom line is that the Gators failed to close out the game properly. The last thing any team wants to do is keep hope alive for teams their opponents when the opportunity comes to put the game away for good. Florida looked like they were going to do enough to get to the Sweet 16. They held the kind of lead that they should’ve been comfortable with throughout most of the second half. They even had all of their starters play up to their capabilities.

Then, the shots Florida had been hitting suddenly stopped going in. The ability to hit clutch threes disappeared, and they started turning the ball over a bit more. Certainly Oral Roberts turned up their intensity, especially on the defensive end. However, the argument could be made that a team of Florida’s caliber should be able to put away what many would consider a lesser opponent. Instead, their late-game situational awareness went out the door, allowing the Golden Eagles to complete the comeback and continue their dream season.

3) The dynamic duo does it again

Oral Roberts has scored 156 points in their two NCAA Tournament games thus far. Max Abmas and Kevin Obanor have scored 113 of those, which comes to a little over 72 percent of their total points. These two have been carrying this team all season. Abmas is the nation’s leading scorer, averaging 24.5 points per game. Obanor isn’t far off his pace though, sitting at 18.6 points per game. These two have caught fire at the right time, and it is paying dividends for this group.

Maybe Arkansas, the Golden Eagles’ next opponent, will find a way to put a cap on this run. If so, it’ll come down to finding a way to slow both guys down, which no one has been able to do so far. For now, ORU fans, enjoy the ride during March Madness and believe in your team.