March Madness: Florida Basketball Defeats Virginia Tech in Round of 64 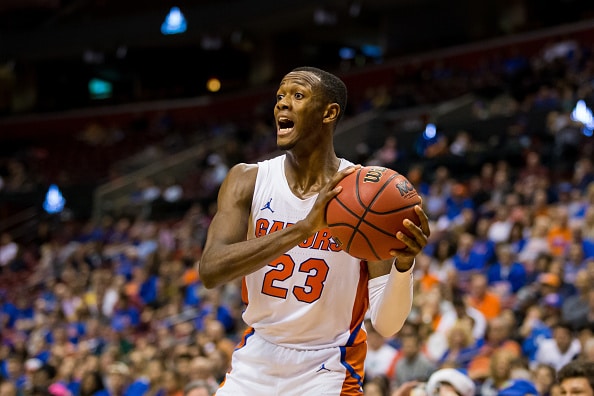 Florida basketball advances to the second round in a March Madness thriller.

Florida basketball defeated Virginia Tech in the opening round of March Madness 75-70. It took overtime for the Gators to finish off the Hokies in a thrilling contest in which Virginia Tech led for most of the game.

Colin Castleton led the Gators with 19 points and 14 rebounds only missing two shots from the field. Scottie Lewis added 15 points and Tre Mann added 14 points and a huge 3-point basket in overtime to seal the deal for Florida. Noah Locke also finished in double figures for the Gators with 10 points.

Virginia Tech was led with a game-high from Nahiem Alleyne who finished with 30 points and the game-tying 3-point basket at the end of regulation to force overtime. Tyrece Radford finished the game with 16 points and Hunter Cattoor added 11 points for the Hokies.

The entirety of the game was playing into Virginia Tech’s hands. The Hokies controlled the pace from the tip, slowing the game down and limiting the number of possessions. Virginia Tech entered the game as the 293rd team in adjusted tempo according to KenPom. They limit their opponents to only 65.5 points per game and held Florida to ten points under their season average through the first two halves of the game. It wasn’t pretty for Florida, but they played Virginia Tech’s style and found the will to win the game.

It was never pretty for Florida from deep, but they knocked it in when it counted. Florida struggled to score from deep with the defensive pressure Virginia Tech provided and after an explosive first half from deep, Virginia Tech was held in check in the second half from three. Entering the game shooting 35.7% from the 3-point line and averaging 8.2 3-point field goals per game, Virginia Tech was held in check. After making five in the first half and shooting over 40% from deep, Florida turned up the defensive pressure and held the Hokies to two 3-point field goals the remainder of the game. This pressure was in large part to Florida not allowing Virginia Tech to have so fluid ball movement and spacing that they did at the beginning of the game.

Colin Castleton is the reason Florida basketball is moving on to the second round of the NCAA tournament. March Madness had no effect on the transfer from Michigan. Castleton was a large reason two Virginia Tech players fouled out early in overtime. He was a defensive force in the paint and constantly guarded the 3-point line with consistency. He was also a force offensively as Florida made their final push to finish off Virginia Tech.

2 thoughts on “March Madness: Florida Basketball Defeats Virginia Tech in Round of 64”