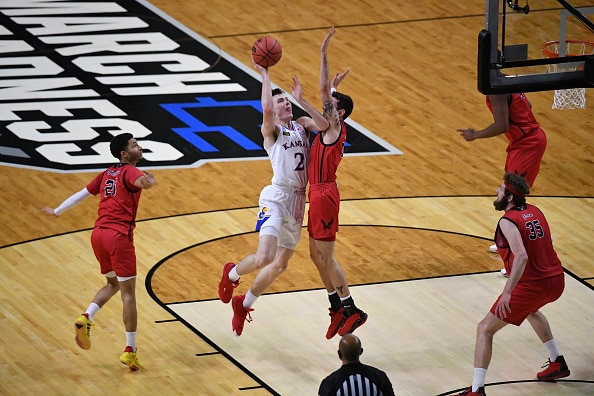 1) David McCormack shines off the bench

Before the game, Bill Self said he didn’t believe star center David McCormack would play much after testing positive for the virus and only rejoining the team on Friday. That didn’t end up being the case after Mitch Lightfoot ended up being a liability for the team, forcing David to take on the minutes. He ended up showing he was just fine, finishing with 22 points and 20 in the second half. He also added 9 rebounds and was a huge reason why they came back in this game. There is no doubt he will start again after he proved he is fine, and he will have a tough test against potential top 3 draft pick Evan Mobley if USC can beat Drake.

2) The Groves brothers show their value

Jacob and Tanner Groves, the two brothers who start for Eastern Washington, scored 58 of the teams 84 points, including 35 from the older brother Tanner. Tanner was a menace, scoring both inside and from deep, and there was a stretch in the game where he took over and kept Eastern Washington in the lead despite an attempt from Kansas to come back. Both brothers will be back next year, making this Big Sky team dangerous next year once again.

Real Kansas fans know that Dajuan Harris is a huge part of the team, even if the stat sheet doesn’t show it. Today, he showed out, scoring 13 points and made 3-4 threes. Harris typically isn’t known for his shooting and more for his passing and defense, so this was a huge plus for them. His presence off the bench is huge, and he will continue to have huge value for the Jayhawks.