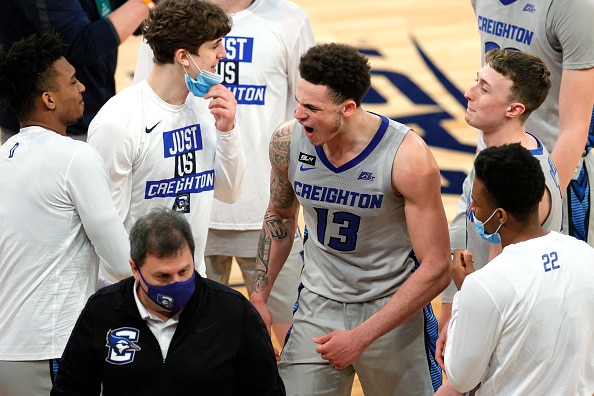 In the most exciting of the typical upset-heavy 5 vs 12 matchups, Creighton basketball was able to avoid the upset by hanging on 63-62. Creighton needed all 40 minutes to win, with a late miss by USCB the difference maker. Here are the three takeaways from this game.

In March, each team needs a guy who can do what is asked and more. Today, that guy was Christian Bishop who scored 15 points, grabbed 11 rebounds, and sent back three shots. He was extremely crucial in keeping them in the game and playing well on both sides of the ball. He also gave them the lead in the last minute thanks to an offensive rebound and two free throws, despite being a sub-50% free throw shooter. They’ll need him to do it again next round, and if he can continue to do so Creighton can make a run.

2) Three-pointers a problem for both teams

In 2021, three pointers are extremely important in winning a game. Most successful teams have a strong three point personnel and knock down at least 35% of their shots. Today, neither team could do that. Creighton, the victor shot only 7-25 or 28% from three, while UCSB shot only 5-21 or 23.8% from three. In this game, it didn’t matter but for Creighton, they’ll need those shots to fall, especially if they end up playing Gonzaga in the Sweet 16.

The Gauchos made the tournament for the first time in 10 years, and have proved this isn’t the last time we’re going to see them. They had a great season, and have done a great job turning high-major players into solid mid-major players. Keep an eye out for this team in the next couple years because they might be winning a game or two in the tournament.