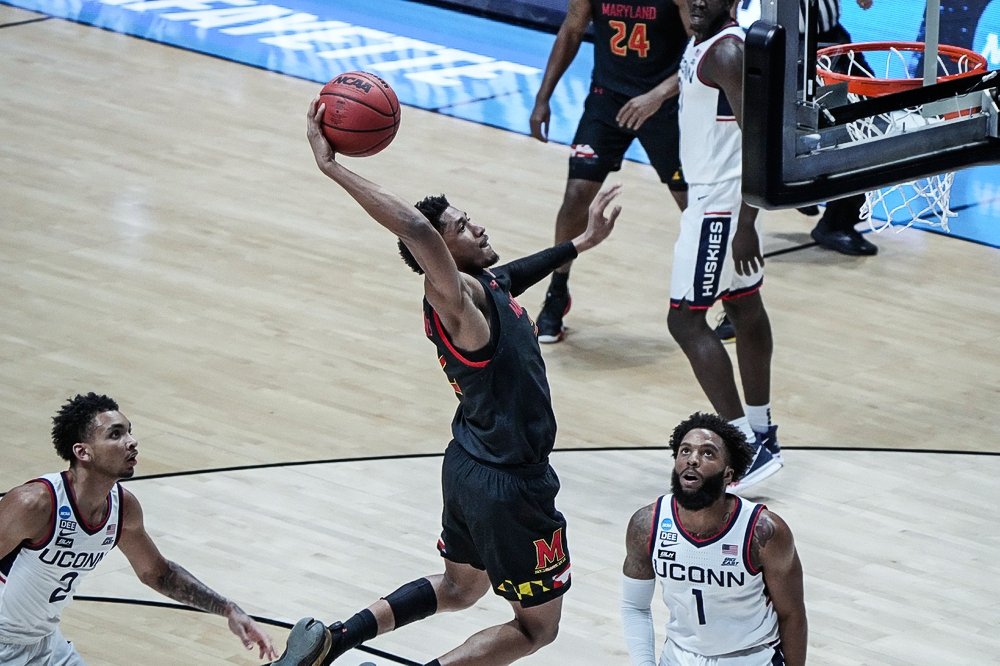 March Madness continued with the Maryland Terrapins holding off a late surge by the UConn Huskies.

March Madness hasn’t seen as much madness during the second day of the first round. After a Friday full of upsets, Saturday has seen more chalk, even if it hasn’t been easy for teams like Kansas and Creighton. Perhaps a 10-7 upset doesn’t raise as many eyebrows, but that’s exactly what we got when Maryland took down Connecticut 63-54 on Saturday night. The Terps created their cushion late in the first half and did enough to maintain it the rest of the way. Eric Ayala stepped up for Maryland, dropping 23 points. Meanwhile, James Bouknight did what he could for the Huskies, leading them with 15 points.

1) Ayala set the tone for the Terps

We have seen it a couple times now where one player really steps up for a team and wills them to a victory. Buddy Boeheim‘s performance for Syracuse yesterday comes to mind, and Eric Ayala did something very similar for Maryland tonight. He sparked the Terps early, having 14 for Maryland early on in the game. He was getting it done both from deep and by getting to the basket, weaving his way inside and fighting through UConn defenders for tough buckets.

Even as Ayala cooled off somewhat in the second half, he had done enough to warrant more attention by the Huskies at that point. His poise as someone who has been around at Maryland for a few years now started to show. Even with his shot not falling as often, Ayala was able to distribute the rock and get others involved. He was also great on the defensive end, taking the ball away three times. Performances like this is what Maryland is going to need if they want to continue their run in March Madness.

2) Not UConn’s night shooting the ball

Connecticut clamped down better on defense during the latter part of the second half, which helped them claw their way back into the game. However, it was the Huskies’ shooting that doomed them in this game. To Maryland’s credit, they have been an outstanding defensive team all season, and that was on display again tonight. However, even when UConn was getting decent looks, the shots just weren’t falling.

At one point in this one, Connecticut was shooting just 11-44 from the field, an abysmal 25 percent. Their desperation push got their overall number up to a little over 32 percent for the game, but even that percentage won’t win many games for most teams. To exasperate things, even their free-throw shooting just wasn’t there tonight, going 5-12 from the charity stripe. UConn fans were happy to return home to the Big East this season, but the Huskies aren’t quite back to their Big East glory days after bowing out in the first round of March Madness.

It’s no secret that Maryland doesn’t have much size on their team this season. They are a far cry from having dominant big man Jalen Smith a season ago. Their guard play has carried them this season, especially with Ayala and Aaron Wiggins increasing their roles alongside Darryl Morsell. However, the Terps have to feel somewhat fortunate that their size disadvantage didn’t hurt them more in this game. UConn actually won the rebounding advantage at 41-30.

That rebounding advantage was especially big on the offensive glass. The Huskies had an astounding 22 offensive rebounds to just four for Maryland in this game. This advantage was evident at times, including on UConn’s first possession, when they grabbed four offensive rebounds alone before nailing a three to open the scoring. The Terps may have squeaked by with that kind of rebounding performance tonight, but another one like that most likely won’t give them a result in their favor.