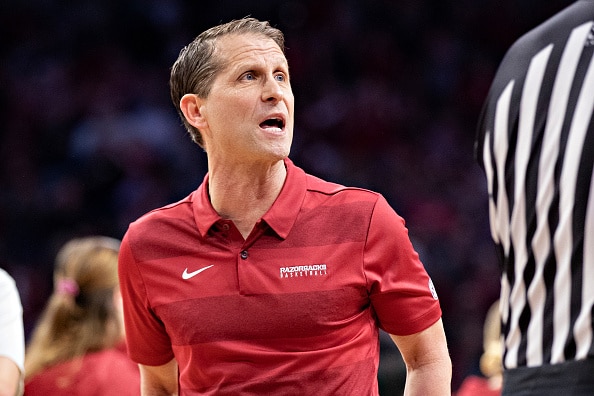 The second game of March Madness began with a serious upset threat, but Arkansas basketball quickly silenced the noise.

Despite falling down by 14 early in the first half of the March Madness opening-round game, Arkansas ended the half on a 17-0 run to take a three point lead into the break. The Razorbacks prevailed, pulling away from Colgate late to win 85-68.

Justin Smith led all scorers with 29 points along with 13 boards for Arkansas. Nelly Cummings had 14 for Colgate, hitting four of eight shots from beyond the arc.

On to the NEXT pic.twitter.com/Zetu54MPdZ

1) Jordan Burns was a non-factor

Arkansas took him out of the game early, and Burns was unable to help his team pull off the upset. Burns, who averaged over 17 points per contest, needed to be sharp to shock the field, and although he played better in the second half, it simply was not enough to lift his team.

Although both teams are in the top 25 in the country in terms of possessions per 40 minutes, Colgate was playing noticeably slower when it was in control earlier in the game. Arkansas made an early adjustment, playing tighter defense, forcing turnovers, and creating transition buckets. This adjustment led to the huge first-half run, giving them the win.

After the adjustment was made with 5:30 to play in the first, Arkansas outscored Colgate 66-35 in the rest of the March Madness game. The increased pressure also forced Colgate to commit 22 turnovers.

Smith, who led all scorers, got to the line 13 times, knocking down 11 to add on to his career-high in points. Arkansas shot 29 free throws, while Colgate only had 17 attempts from the charity stripe.

Arkansas was dominant inside, even when the shots did not fall. Getting to the line is huge in the tournament, and Arkansas took advantage of its size and knocked down 22 free throws in the March Madness contest.

A big second half pushes Arkansas past Colgate! pic.twitter.com/nS1OMyavT8

Arkansas will take on the winner of Texas Tech and Utah State on Sunday in the Round of 32.