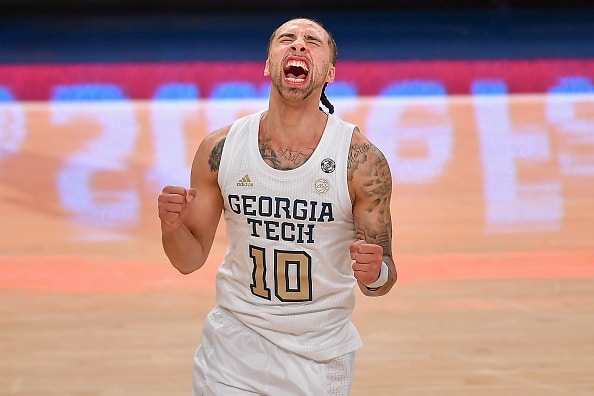 Despite only playing one tournament game each, Georgia Tech basketball and Florida State made the championship round due to opponents (Duke and Virginia) having to forfeit due to covid policies, both teams looked top tier in the matchup.

The first half was extremely close, with the largest lead being six in favor of the Yellow Jackets. Georgia Tech led 31-30 at the break, but was clearly in the driver’s seat.

Florida State came out of the half firing on all cylinders, taking a nine point lead with 14 minutes to play. However, Georgia Tech came right back, going on an 11-2 run to tie the game with just under 11 to play.

Georgia Tech would keep up the pressure, attacking the rim, getting to the line, and forcing turnovers. The Yellow Jackets would pull away late, and free-throw shooting secured the five point win and league championship.

It is one thing to force turnovers, but the dagger is capitalizing on them. Georgia Tech did exactly that, scoring 31 points off of turnovers, while FSU had just six. Despite shooting just 43.5% from the field, Georgia Tech attempted 12 more shots than the Seminoles.

In all six of Florida State’s losses, it turned the ball over 14 times or more. The Noles have to take care of the ball better to go far in March. As for Georgia Tech, swarming defense like that is the reason it can make a deep run.

Georgia Tech basketball shot 21.7% from beyond the arc and still won. Defense helps, but it is not often a team gets to 80 shooting so poorly from behind the bonus sphere. Josh Pastner made an early adjustment to take the ball to the hole, not only getting easy layups, but also putting pressure on a very physical Florida State defense.

This paid off, as the refs were calling a tight game. Florida State out-fouled the Yellow Jackets 23-14 in the contest, leading to 28 free throw attempts for GT. 21 of its 80 points came from the charity stripe.

An adjustment like that is what wins championships. Rather than shooting the bricks off the building, Pastner told his guys to get to the rim and create, which is exactly what they did, and exactly why they were crowned ACC Champs.

We will start with why not. For starters, the team shoots a measly 35.5% from three for the season. Eventually, it will run into a good shooting team, and twos cannot beat threes.

In addition, the ACC Champion has not won a National Title since 2010, and only seven teams have won both since the start of the ACC Tournament in 1954.

This pressure can cause opponents to fold, especially under the bright lights of March Madness. Someone who will not fold: Alvarado, who is up to any challenge and is the heartbeat of the team.

Almost forgot to mention that GT has the conference POTY in Moses Wright, who posted 15 points and eight boards in this victory.

Georgia Tech will definitely be a fun team to watch in the tournament, and its stock continues to rise. The Yellow Jackets have it in them to make a run. Will they?

The teams await their seeding tomorrow on Selection Sunday.