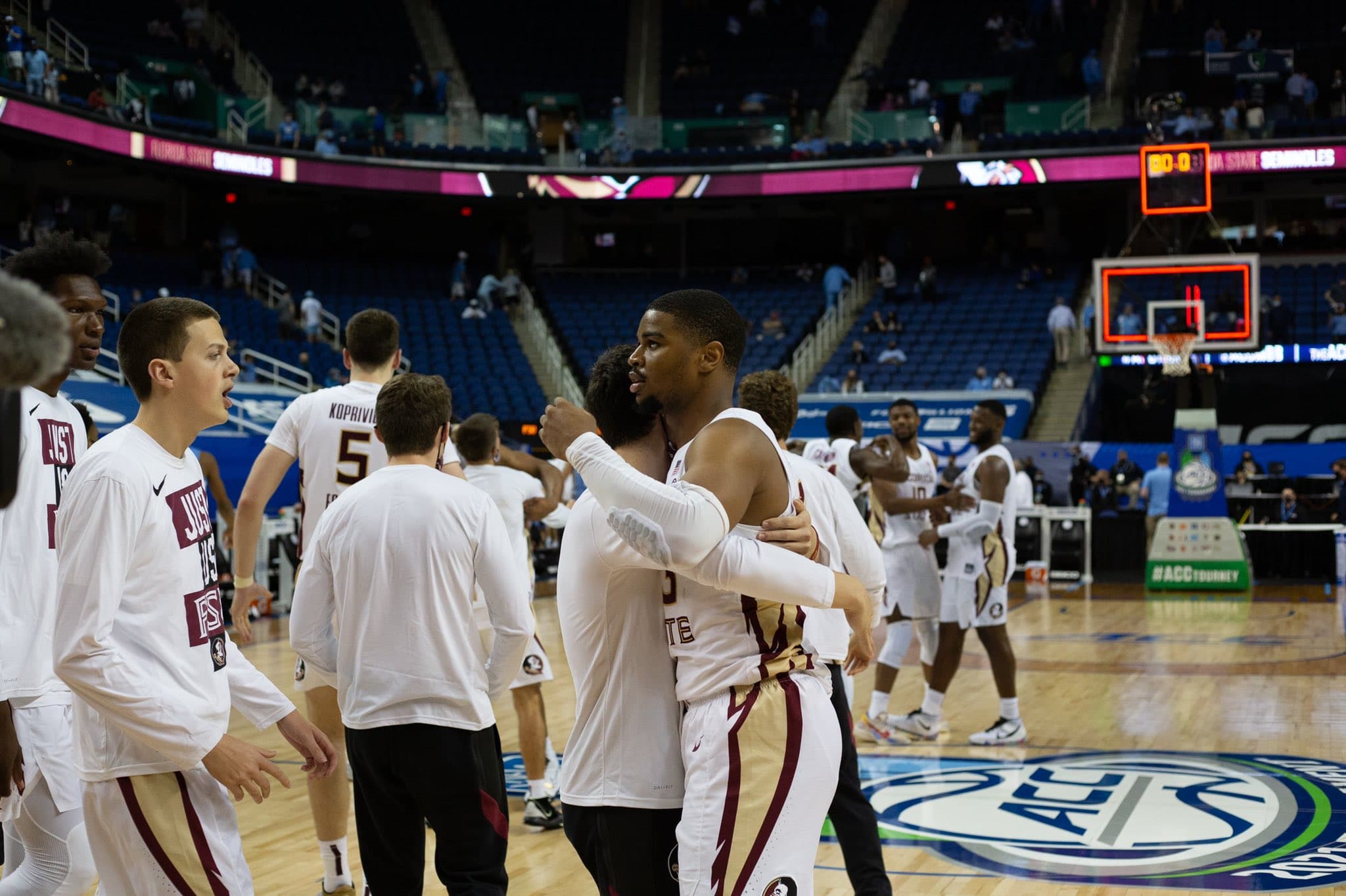 COVID-19 halted the ACC Tournament semifinals to just one game.

In the first semifinal, Covid-19 just needed one score against the #1 seed ACC Champion Virginia Cavaliers team and proved itself to be undefeated against all comers still yet as the virus helped send the Rambling Wreck of Georgia Tech to the ACC Championship game. When asked about the Cavaliers’ surprising ouster from the tournament, a Virginia fan was heard frustratingly saying, “I just wish we had a shot!” In all seriousness… if the tournament has shown one thing… it is that the Covid-19 threat is still a real invisible one that is to be dealt with and it is a shame that it has dealt a blow to two teams who were playing really well in the ACC Tournament: Duke and Virginia. Could Duke have beat Florida State? It’s hard to say but that’s why we like to see these games play out on the court in March and not wonder about what could have been due to a virus.

In the second semifinal, the #6 seeded North Carolina Tar Heels had a matchup with the #2 seeded Seminoles of Florida State in a game that saw the Florida State Seminoles pull out a victory in a highly competitive semifinal worthy of March Madness stature over their opponents from Chapel Hill by a score of 69-66. The ‘Noles were led by Balsa Koprivica’s 17 points and 11 rebounds. The 7’1 240 pound center from Belgrade, Serbia led a Seminole team that played a very physical game against a very athletic Tar Heel lineup.

1) Don’t Overlook The ACC In The NCAA Tournament

All year long many critics have often talked about the power of the teams out of the Big 12 Conference and the Big Ten Conference. Those conferences do have some squads that should go far in the NCAA Tournament that begins in the upcoming week. Those same critics had better not overlook the ACC. The semifinals boasted the ACC Champion Cavaliers of Virginia, the Yellow Jackets of Georgia Tech, the Florida State Seminoles, and the North Carolina Tar Heels. While the Cavaliers may have fallen prey to the ever-present coronavirus, they are still a force to reckon with if given the chance to participate in the tourney and a real threat to go deep. The Yellow Jackets are led by inspirational leader Jose Alvarado who went into the locker room injured and walked out a la Willis Reed ready to thump. The Florida State Seminoles loom long and large and in charge as they boast 11 of their 12 twelve players over the height of 6’5. The North Carolina Tar Heels are still a work in progress but looked way more like the Tar Heels we have come to know and love in past games tonight in the matchup against the Seminoles. This isn’t even counting a #3 seeded Virginia Tech Hokies team that also battled the Tar Heels in a very physical matchup as well in Greensboro. With these five teams in the NCAA Tournament, the ACC could very well see three of these five teams possibly advancing to at least the Sweet Sixteen.

2) Florida State Is Long And Athletic

Watching the Seminoles play tonight it makes you wonder how in the world did the ‘Noles not win the conference championship? Leonard Hamilton has went and made the basketball arena in Tallahassee the best little IHOP in college basketball (International House of Players). Led by Balsa Koprivica from Belgrade, Serbia, 6’6 Anthony Polite from Lugano, Switzerland, 7’1 Tanor Ngom from Dakar, Senegal and 6’5 Nathaniel Jack from Mississauga, Alberta…. not to mention a host of American players that look like redwoods from California. The Seminoles and Leonard Hamilton are long and athletic and just may be on track to a possible Elite Eight berth in the tournament ahead at least.

If the ACC Tournament has shown the college basketball world anything, it is that the coronavirus is a real threat to deal with on a national scale. Even though the numbers aren’t as bad as they began to be a year ago, we have already had two teams knocked out of the ACC Tournament because of a positive reading. If and when the NCAA Tournament gets going in Indianapolis in its self-proclaimed bubble, we as fans can only hope and pray that all of these student-athletes stay safe and healthy and are able to put on a show that brings us more great March Madness memories of a lifetime. College basketball in March has become a rite of passage for many in this nation. For some, it’s like a national holiday that lasts nearly three weeks with its climactic end on a Monday night in April. So for all of us college basketball fans out there, the ACC Tournament will produce a champion. Every conference will a champion. There is that real possibility though that not every conference champion will make it to the NCAA Tournament due to a positive test. And that my friends is the true real madness of March. That possibly out there somewhere is a team full of young men whose hard work and many hours of preparation will be for naught. If that isn’t March Madness… I don’t know what is.