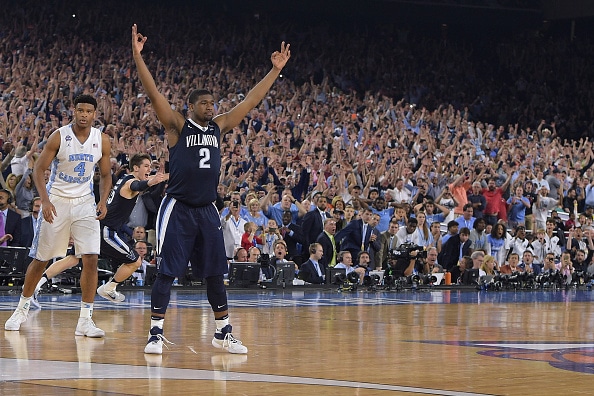 Who has what it take to win a college basketball National Championship? Take a look at 30 contenders, door-knockers, and dark horses who could cut down the final nets.

Three weeks ago, we took a deep dive into the statistics of a college basketball National Champion. Baylor, Gonzaga, Houston, Illinois, and Michigan all stood out from the rest of the field. Their season performances, up to that point replicated what a past college basketball National Championship team accomplished before heading into the NCAA tournament.

The field of 68 is now set. One of these 68 teams is going to be cutting down the nets on that first Monday in April.

March Madness is upon us and now that Selection Sunday has come and passed, millions of brackets are being filled out around the world in hopes of filling out a perfect bracket. In 2019 Business Insider reported that there were over 17.2 million brackets submitted to ESPN alone. Whether it’s filling out that perfect bracket or winning the office pool, college basketball is taking over yet again in March.

Whether you are jumping on board just for fun or you’re a die-hard college basketball fanatic, it all comes down to these last few weeks.

So I’m here to provide a few insights.

By no means can I tell you who is going to do win it all, but I’m going to do my best to provide you with some pertinent information that could help you along the way. It’s not easy to win a college basketball National Championship, but there seems to be some common ground between past champions.

Now, let’s stop wasting time and get right to the point. As a reminder, here are the characteristics we are looking at of past college basketball National Champions since 2011.

I took the 68 teams and first eliminated any team who did not meet any of the three benchmarks set by past champions through KenPom data. 39 of the 68 teams remained. Of those 39 the teams were ranked accordingly and we were left with three tiers of ten teams each as potential college basketball national champions.

Nothing has changed from three weeks ago, except for the fact that Gonzaga won both the regular and conference tournament championships in the West Coast Conference. The Bulldogs are one of three teams ranked top ten in defensive and offensive efficiency and top ten overall at KenPom. The Bulldogs may not win it all but their is no doubt they are the favorites.

In three weeks, Illinois has done nothing but get better. They have climbed the KenPom ranks to third overall and jumped 12 spots in defensive efficiency. Illinois won the Big Ten tournament and 14 of their last 15 games.

Illinois has jumped Baylor on this list in large part because of Baylor’s struggles defensively since coming back from a covid pause. Baylor is a top-five team at KenPom and has a top-five offense, but in three weeks their defense has taken a 28 spot tumble from 16th to 44th.

Along with Gonzaga and Illinois, Michigan is the only other team that is top ten in each of the three KenPom categories. The question with Michigan is Isaiah Livers. If Livers is healthy they have a better chance, but even without him, Michigan showed they could still compete with the best of them.

Alabama has some work to do, but they are still good enough to contend for a national championship. They are a top ten team with a top ten defense, the question with Bama is if their offense is good enough to win the whole thing. Only one team has won with an offensive efficiency ranking below 21 and Alabama currently sits at 34. It is certainly doable but it won’t be easy.

Houston has the KenPom ranking. They have both the offensive and defensive efficiency rankings, but they have fallen on this list because of one number. Houston’s defensive ranking is 16, which is 11 spots lower than where they were three weeks ago. 16th is not a bad spot but dropping that far while only playing one other team who made the NCAA tournament is worrisome.

Ohio State made it to the Big Ten Championship game and took Illinois to overtime so they certainly have what it takes to win it all. Ohio State is however ranked 79th in defensive efficiency and I just don’t think they can get it done solely for that reason.

Florida State is one of two teams not ranked in the top 10 at KenPom to make tier one. At 15th overall, the Seminoles make the cut. Their concern is like many teams defensively. They rank 48th at KenPom and will need to tighten things up to make a run.

Texas may be a long shot but it’s hard not to have two Big 12 teams as contenders and they have the next best KenPom numbers. The Longhorns fall slightly out of the top 25 overall, and just miss the cut in defensive efficiency but of the teams remaining, they get the nod.

Creighton is on the outside looking in but I wouldn’t be surprised to see them make a run in the NCAA tournament. The Bluejays are 19th overall at KenPom and have increased their defensive ranking by seven spots which now sits at 40.

Loyola is one of only two top-ten KenPom teams that didn’t make tier one. That is in large part to their offensive efficiency ranking of 49, but it is worth noting that in three weeks it has increased by 19 spots.

Colorado is that team that just quietly sits in the rankings just waiting to pounce. This is where they were three weeks ago and nothing has changed. The Buffaloes have all the right numbers to make a deep run.

This one may be a bit of a surprise, but UConn wasn’t even on the radar three weeks ago and now they are sitting at 16th overall at KenPom. If one program can be the exception to the rule it’s UConn who has been the exception just about every time they won the college basketball national championship.

Just like three weeks ago the question for Arkansas is their offensive consistency.

You may think it’s crazy not to have Oklahoma State higher after the way they have been playing, but the numbers just don’t support it. They are 30th at KenPom and 54th in offensive efficiency. The one thing going for them is that these numbers highly resemble UConn’s in 2014.

In three weeks West Virginia just hasn’t gotten better. They are now nine spots lower at KenPom and 10 spots lower in defensive efficiency. Both are big areas of concern.

Virginia only scores 68.6 points per game. A total that low just isn’t going to cut it in the age of the 3-pointer. We also have to take into consideration the covid dilemma the team is going through.

If everyone comes back, Purdue is likely a true contender next season, but for now, they have work to do. They meet every KenPom criteria but the numbers just don’t wow you.

No Collin Gillespie and Villanova is in trouble. Even with Gillespie Villanova’s defense didn’t look like it could stand up in the tournament.

The offense was the question mark three weeks ago and it still is, but it is eight spots higher than it was.

USC has climbed seven spots at KenPom in three weeks, but their just seems to be something missing.

BYU gave Gonzaga a scare but 40 minutes proved too much for them. They have a dynamic offense that unfortunately taken a tumble at KenPom.

Offensively, Texas Tech isn’t consistent enough and defensively, the Red Raiders have actually dropped a few spots in the rankings.

Questions with covid entering the tournament and an offense that has gotten better but dropped nine spots in the rankings aren’t a good sign.

When they are good, they are really good, but their offense hasn’t really improved in three weeks.

They are a top ten KenPom team which can’t be underestimated, but they also come in under that 70 PPG threshold which is a big no. This season’s success isn’t great but the metrics suggest they can compete for a college basketball national championship.

Don’t sleep on the Bonnies. St. Bonaventure has quietly been climbing the KenPom rankings playing in the A-10.

The ACC tournament showed what North Carolina is capable of, but can their offense compete like that for six games in a row?

They have been through the ringer in the Big Ten and are ready to compete.