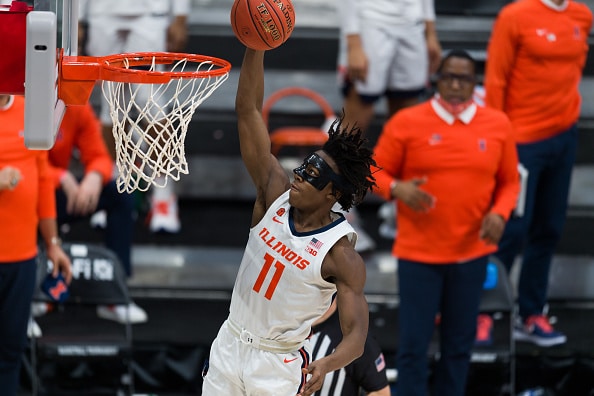 The day kicked off with Michigan taking on Maryland in the Big Ten Quarterfinals. The Terps kept the game close in the first half, but Michigan ultimately pulled away late for the 79-66 victory. Mike Smith, Eli Brooks, and Franz Wagner combined for 50 of the Wolverines 79, and tempers flared during the game, as Mark Turgeon and Juwon Howard exchanged words.

Juwan Howard was ejected during the last timeout.

Here’s a look at what transpired: pic.twitter.com/rd5T99zAtC

The day at Lucas Oil Stadium continued as Ohio State took on Purdue. The Buckeyes had control for most of this game, but Purdue would not go away easily, closing regulation on an 11-2 run to send the game to overtime. However, Ohio State played a strong extra period, winning comfortably, 87-78.

The league’s hottest team, Illinois, remained that way, cruising past Rutgers, 90-68. The Fighting Illini have been red hot as of late, which will only continue with the return of Ayo Dosunmu.

The night was capped off by Iowa and Wisconsin, two very contrasting styles. Wisconsin’s style prevailed, but unfortunately for the Badgers, the team did not. The Hawkeyes hang on in the back and forth battle, winning 62-57, despite shooting 10% from three.

For Michigan, this is the key to success. This is weird for a team that can have offensive bursts and outscore its opponent easily when shooting well. However, Michigan wins most of its games when their defense is playing well. In fact, all but two wins in league play have come when the opponent is held to less than 70 points.

Michigan is a great team, but showed real weakness at the end of the regular season, showing it can go cold on any given night. Tonight, in the Big Ten quarterfinals, the offense did get back to form after going cold against Michigan State, but the defense was better, holding Maryland to 30% from range and getting six steals.

The Buckeyes held a lead for the majority of the game, only to give it up in the final minutes of regulation and have to play overtime in the quarterfinals. Granted, Purdue is a very good team, so being a close game is not at all a knock on Ohio State. However, having a large lead and then giving it up cannot be a good sign.

The 2019 Virginia team had the same issue, and they still won the National Title, so Buckeye fans can take a deep breath. What is worrisome is the fact that Duane Washington and E.J. Liddell each played over 30 minutes and now have to play again tomorrow. Fatigue could be a factor for the Buckeyes. Ohio State does not shoot particularly well as it is, so added fatigue demands more paint looks tomorrow.

Not just a threat to the rest of the Big Ten, but the entire country. With Baylor falling tonight, Illinois, as of right now, should sit in the second one seed. Could the Illini take down Gonzaga?

What a match-up that would be. Without Ayo, Illinois probably would not stand a chance. However, his return is huge for Illinois, as not only does he produce at a high level, but he creates for fellow star Kofi Cockburn. Those two are matchup nightmares for any coach, and if Illinois keeps playing well, it is a serious contender for the title.

How it started. How it ends. Ayo Dosunmu becomes the next Chicago product to take Illinois to #1 seed in the NCAA. pic.twitter.com/46sEH5Xz8C

Iowa shot 10% from deep in its win. It is not often one can write that. However, despite shooting so poorly, Iowa only turned the ball over eight times, allowing for more field goal attempts, and, as a result, more points.

Wisconsin turned it over 14 times in this Big Ten quarterfinals matchup, but the six turnover difference seemed to be the difference in this game, with the Hawkeyes winning by five.

Michigan and Ohio State will face off at 1:00 tomorrow on CBS

Illinois and Iowa will shortly follow that game on the same network.