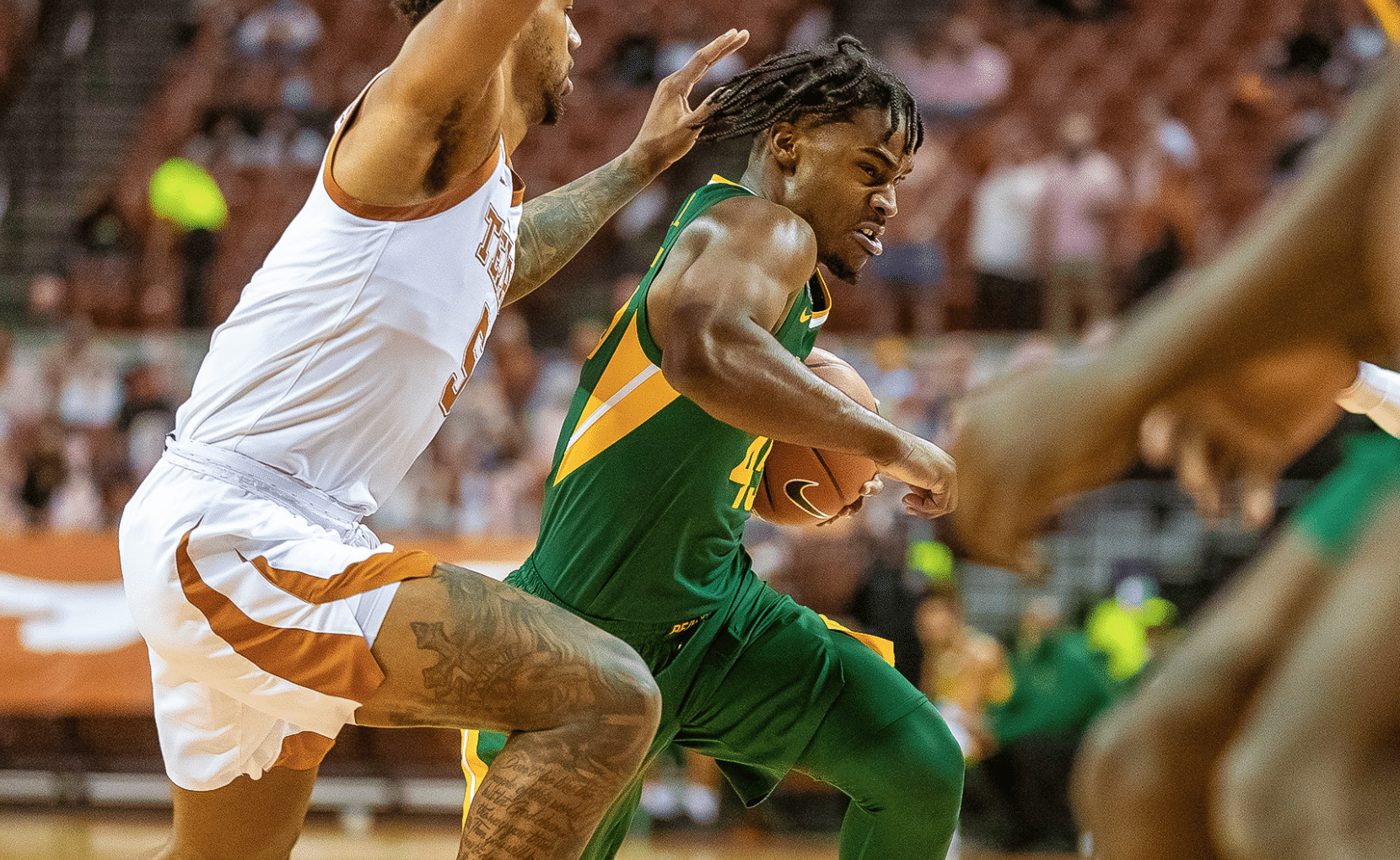 With the regular season concluded and the bracket set, here’s a preview of the loaded Big 12 Tournament

Very rarely in college basketball do you see a conference with an undisputed regular-season champion has a “wide open” tournament. That, however, is the case of the 2021 Big 12 Tournament.

While Baylor won the regular-season title handily, this week’s Big 12 Tournament should be among the most exciting tournaments of championship week.

Seeds 1-6 are all locks to be top-5 seeds in the NCAA Tournament. Any of those six teams have the potential to run the table and win the Big 12 tournament.

Between Baylor’s recent yips, Kansas’ final month surge, and the potency of Texas and West Virginia, this is truly anyone’s tournament.

There is a lot to unpack, so let’s get the ball rolling here.

The Iowa State Cyclones had an under-the-radar horrible season. Steve Prohm’s team went 2-21, going 0-18 in conference play. The Cyclones’ two wins came against Arkansas Pine-Bluff and Jackson State, with their only real highlight of conference play being a near-upset of Baylor in the final week of February.

Even that near-upset has an asterisk, as the Cyclones were Baylor’s first opponent following a lengthy COVID layoff. The Cyclones have zero chance to knock off Oklahoma on Wednesday.

Almost equally as bad, and perhaps worse on paper, are the Kansas State Wildcats. K-State actually managed to win four conference games, including an upset win over Oklahoma, but everything else was pretty bad.

The Wildcats lost to Division-3 Fort Hays State during non-conference play, and while their record has technically improved since then, that loss alone should indicate that the Wildcats are a non-factor. They could beat TCU, who they beat once during conference play, on Wednesday. The following game would be against Baylor. Enough said.

TCU isn’t a very bad squad on paper. However, the Horned Frogs’ 5-11 mark in Big-12 play is more of a product of a top-heavy league.

The Horned Frogs swept Oklahoma State in the regular season, which is certainly some reason for intrigue. Past that, the Horned Frogs have been blown out time after time by higher-level opponents, making them a total non-factor in the Big-12 tournament.

TCU could MAYBE make things interesting against Baylor with their streaky scoring. Realistically speaking, they won’t put up a big enough fight to make noise in the Big 12 Tournament past the first round.

The Oklahoma Sooners have cooled down considerably as of late, losing their last three games: Back-to-back losses against Oklahoma State, followed by a home loss to Texas

The Sooners caught fire in late January, beating Texas, Kansas, West Virginia, and Alabama. Since then, Oklahoma has done close to nothing, but their roster and experience make them a threat to string some wins together.

After beating Iowa State in the first round, the Sooners would face Kansas, who they have beat this season. Kansas is playing their best basketball at the right time, so Oklahoma probably won’t get past the second round of the Big 12 Tournament.

The Texas Tech Red Raiders had a mediocre conference play mark of 9-8. Within that record came a series sweep of Texas, as well as a win over Oklahoma.

The Red Raiders kept a whole lot of games close and never played down to their competition, which typically bodes well in a tournament setting. The Red Raiders will only go as far as star point guard Mac McClung will take them, which could be as far as the championship game, considering that they are on the opposite side of the bracket as Baylor.

The Red Raiders will take on Texas on Thursday. Although the Red Raiders swept the Longhorns in the regular season, neither of the two wins were convincing or pretty. Thursday’s duel should be a dog fight, with the Red Raiders only holding a chance if McClung comes to play.

The Oklahoma State Cowboys have been another difficult team to evaluate, as they have kept games close against lower competition, but have also played up to much higher-level competition.

The big story with the Cowboys is their superstar freshman Cade Cunningham. The surefire top pick in the NBA draft has put up huge numbers all season and will certainly be looking to end his only collegiate season on a high note.

The Cowboys will take on West Virginia on Thursday. If they win, they’ll likely take on Baylor on Friday, where Cunningham will have his third chance to pick up the signature win of his freshman season.

With a star-studded roster, anything is possible. If the Cowboys bring their A-game to Kansas City, we could very well see them in the Big 12 Tournament Championship game.

The West Virginia Mountaineers have made the most of a bad situation, improving mightily as a team since star center Oscar Tshiebwe left the program before conference play began.

They’ve had some close games against lower competition, but the Mountaineers can run with anyone and keep any game close. They’ll face off against Oklahoma State on Thursday, who they lost to on Saturday without Cade Cunningham. If the Mountaineers can avenge that loss, they’ll take on Baylor in the semifinal.

The Texas Longhorns started the season as one of the nation’s hottest teams, winning the Maui Jim Invitation en route to a 10-1 start. Since then, Texas has come back down to earth, continuing to make noise during conference play.

The Longhorns, too, can compete with anyone, sweeping Kansas in the regular season and splitting the season series with seeds 2-7, with Texas Tech being the only exception. The Longhorns are the most experienced team in the conference besides Baylor and are likely the top competition to the Bears.

If Texas can avenge their season sweep at the hands of Texas Tech on Thursday, they’ll likely face off with Kansas. From there, the Longhorns could have the motivation and momentum to challenge Baylor for the Big-12 Championship.

The Kansas Jayhawks have experienced a wild regular season, with two huge hot streaks sandwiching a cold streak that saw them drop out of the Top-25.

Behind Marcus Garrett and David McCormick, the Jayhawks have the most tournament experience out of any team in the conference. They’ll almost definitely take on Oklahoma on Thursday, and considering their recent hot streak, Kansas is a near-lock to face either Texas or Texas Tech in the semi-final on Friday.

By the way, the Jayhawks were the only team to beat Baylor this season, dismantling the Bears just one week ago. Everyone would love to see a third and final showdown between Kansas and Baylor for the Big-12 Championship, and the Jayhawks have the momentum and experience to do just that.

The undisputed number two team in the country, the Baylor Bears are the favorite to win the Big 12 Tournament.

It took the Bears three COVID pauses and nearly four months to finally lose a game, but the Bears quickly rebounded with blowout wins over Oklahoma State and Texas Tech, and a regular-season title-clinching overtime win over West Virginia.

The Bears are the only team in the country that could put up an argument with Gonzaga as the number one team in the nation. Behind a star-studded roster with the likely conference player of the year Jared Butler, defensive player of the year Mark Vital, and other superstar two-way players such as MaCio Teague and Davion Mitchell, this is Baylors’ tournament to lose.

If they can handle West Virginia or Oklahoma State for the second time in as many weeks, the Bears will find themselves where they belong, defending their regular-season title in the Big 12 Championship game on Saturday.