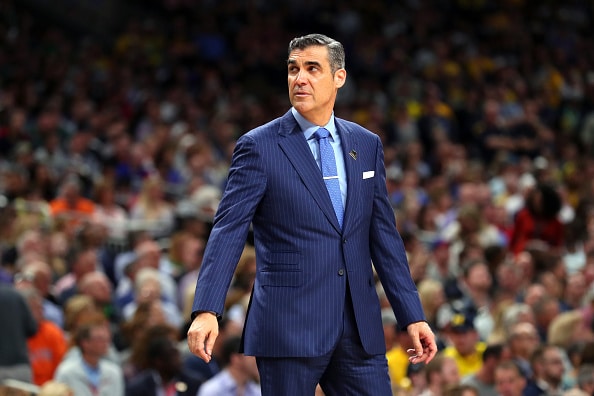 Villanova basketball used a few mistakes from Texas to grind out a tough win over the Longhorns.

Rebounding and turnovers cause the Texas Longhorns to fall to the Villanova Wildcats ending their perfect season hopes. The Longhorns men’s basketball team had the opportunities, but when they needed a big shot or momentum, they could not hit them, and the Wildcats would cool them off. The balanced play of the wildcats on both ends and the ability to make smart passes and not turn the ball over led them to a win. Coach Jay Wright had a game plan for the second half that really catapulted the Wildcats to a win. Texas could not get to the free-throw stripe and were putting Villanova on the line. While Texas was the better team offensively, having a better field goal percentage and three-point percentage, the free points and turnovers were the difference. The Wildcats turned the ball over only nine times after giving up the ball seven times in the first half. Coach Shaka Smart could not calm his team down, but I expect this team to continue to be a problem moving forward. Texas turned the ball over twelve times, and the frustration showed as the Longhorns put the Wildcats on the free-throw line for nineteen attempts making fourteen of them.

The stars for the Wildcat men’s basketball team made it difficult for the Longhorns. Jeremiah Robinson-Earl and Justin Moore both scored a team-high 19 points. Robinson-Earl added 9 rebounds, just barely missing out on a double-double. Collin Gillespie had a rough shooting day going 3 for 10 from the field and 2 for 4 from three-point range. He ended the day with 12 points after making 4 crucial free-throws in the final stretch. Courtney Ramey and Matt Coleman III led the Texas men’s basketball team. Both finished with 17 points. Ramey was more efficient, going 7-of-11 from the field and 2-of-4 from behind the arc. Coleman had to take fifteen shots to make seven of them from the field and 2-of-5 from three-point range.

To start the game, Villanova basketball came out hot. Building a 16-9 lead, the wildcats forced Shaka Smart and the Texas Longhorns to take a timeout. A switch flipped as Longhorns men’s basketball went on a run to tie and swing the game in their favor. These two teams’ intensity was expected as they both played strong defensively and took great shots. The Texas Longhorns men’s basketball team ended up building its biggest lead of 7, leading 27-20 until 5 minutes left in the first half. Collin Gillespie hit a three that started the Villanova men’s basketball team to fight back and tie the game. Texas fought to stay in the game to take the led into the half, but the Wildcats led 32-30. The bigger takeaway was that the Longhorns’ length and their ability to disrupt the passing lanes causing seven turnovers and that the Wildcats were able to outrebound the Longhorns. Texas basketball shared the ball well, but Villanova’s balance of offense was too much in the first half of the game. Justin Moore led the Wildcats at the half with 11 points, Collin Gillespie followed close behind with eight points and James Robinson-Earl with six points.

After a disciplined first half of play, the Texas Longhorns fouled 5 times in the first 5 minutes. The Villanova Wildcats were able to hold off the Longhorns for most of the game. It was a Courtney Ramey 3-pointer that tied the game at 57 with 2:37 left to play. Cole Swider for Villanova’s men basketball team broke the tie with a 3-pointer of his own. Gillespie was able to poke the ball away from Coleman that led to a Jeremiah Robinson-Earl dunk off the assist from Jermaine Samuels. The Wildcats led 62-57 with under a minute to play. Ramey hits another 3-pointer to make it 62-60. Another setup play led to a layup from Jermaine Samuels for the wildcats. Kai Jones came down and made a very athletic jumper making the shot and drawing the foul. He was not able to convert the 3 point play. With 15 seconds left, Ramey had the mind to foul, but it was his 5th, and he is forced to sit the rest of the game. He made his free throws to make it 64-62. Matt Coleman is able to make a beautiful layup, but it would be the last points and hope for the Longhorns. The Wildcats finished on two free throws from Collin Gillespie as the Wildcats grab the rebound with under a second to play. Wildcats walk out with a win over the undefeated Longhorns 68-64.

Both of these men’s basketball teams deserve their rankings at 12 and 17 in the NCAA. The Villanova Wildcats have an excellent coach in Jay Wright, and the transition for coach Shaka Smart was rough, but he is back to his system of play. The Longhorns offense will continue to be a threat, and I am sure Shaka will focus on blocking out, driving the ball, and reducing fouls. Coach Wright will focus on explaining why ball movement is so important. The points off of the smart passes that pass from good to great shots. An example of a good shot to a great one, in the clip above, one more pass to a wide-open corner 3-pointer, would have made a shot go from good to great. Collin Gillespie will need to take some time to allow the game to come to him and not force it. In any case, these two teams will likely be dancing come March.