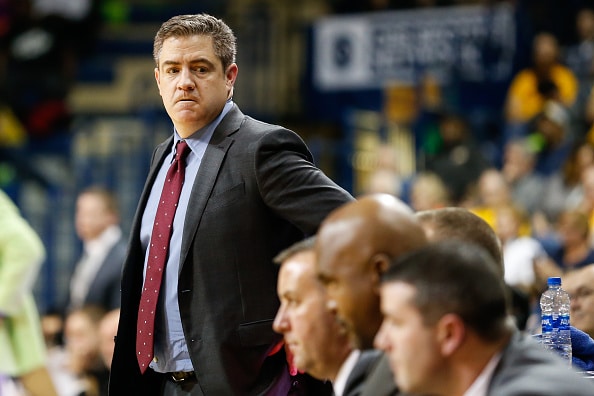 With a lot of good mid-major basketball teams this season, quite a few have struggled against non-Division I opponents this season.

One of the most beautiful things about the game of college basketball is the upset. It’s what makes March Madness so magical. Need evidence? Look no further than how excited college basketball fans were when UMBC became the first 16-seed to upset a top seed in the men’s tournament a few seasons ago. A euphoria ensues amongst alums of mid-major basketball schools as they tell everyone they know that their school took down a blue blood.

However, what happens when you find your school on the other side of such an outcome? These kind of results are few and far in between and are rarely noteworthy for anyone that isn’t a fan of the two schools that played. Mid-major basketball teams usually get a game or two in with non-Division I teams as a chance to take a breather during non-conference play. You may have one upset of this kind in a given season.

The pandemic has certainly changed that this season, as teams are scrambling to play anyone and everyone in order to get games played. This has become especially important since teams couldn’t scrimmage or have normal practices leading up to the 2020-21 season. However, that kind of uncertainty has produced mixed results. The season is not even two weeks old, and already four mid-major teams have dropped contests to Division II opponents. What gives?

USC Upstate was the first victim of this type of upset this season. The Spartans dropped their season-opening game on the opening night of the college basketball season. Picked to finish fifth in the Big South in the preseason, expectations had been higher in Spartanburg, SC than in the past few seasons. Instead, USCU was met with a crushing defeat. For all intents and purposes, this game was even throughout. The difference came in the final 10 minutes of the first half when Southern Wesleyan used a short burst fueled by a trio of deep balls to take a nine-point lead at halftime.

Upstate could never erase that deficit in the second half and fought just to keep the score looking respectable, as the Warriors had a 17 point lead with just under four minutes left in the game. The difference: rebounding. Southern Wesleyan outrebounded Upstate 41-29, and that didn’t go unnoticed.

There was a lot of fanfare surrounding Howard heading into the season. Five-star recruit Makur Maker committed to the Bison, and many believed the team could immediately vault to the top of the MEAC. However, after dropping this game to Division II Queens, it is clear that there is still a long way to go in Washington D.C. The story of this game was similar to that of USC Upstate’s demise. Queens made their push over the first half’s final 10 minutes and found themselves up by 15 at the half.

It was more of the same at the beginning of the second half, as the Royals pushed their lead up to 23 with just under nine minutes left in the game. Turnovers are what did Howard in here. The Bison turned the ball over 18 times compared to Queens’ seven turnovers. The Royals made those turnovers hurt as well, getting 25 points off them. Howard also shot just 10.5 percent from the three-point line, making two of 19 attempts. Makur Maker was shut down with an injury after this game, meaning Howard may be in for a long season without their highly-touted freshman.

Stetson is another mid-major that had high expectations. The Hatters were picked third in the preseason Atlantic Sun poll, even receiving some first-place votes. Promising sophomores Rob Perry and Mahamadou Diawara were expected to lead the way. Instead, Stetson found themselves on the short end of their season-opening game on Monday, November 30th. This game was a lot closer than the other two mentioned, with both teams trading blows down the game’s final stretch. In the end, Emmanuel hit their free throws down the stretch to ice the game.

While the result is disappointing, the Hatters still seem to be in decent shape. Perry picked up where he left off last season, scoring 26 points. Diawara had a double-double with 10 points and 14 rebounds. Furthermore, six freshmen accounted for just over half of Stetson’s minutes. Poor shooting did this team in on the night, as Stetson shot just 38 percent from the field for the game and just under 29 percent in the second half. This should just a blip on the radar as the Hatters figure themselves out during the season.

Central Michigan failed to find its legs in its second game in as many days against Flagler on Wednesday. The Chippewas had an abysmal visit to Miami to participate in Florida Internationals’ small invitational. They lost to FIU by 20 before falling to Flagler by a similar margin. The Saints blew this one open much like the other D-II schools, putting together a solid ten minutes of basketball between the end of the first half and the start of the second half. After going up 21, they never let CMU get within more than 16 the rest of the game.

Perhaps it was fatigue that did Central Michigan in. The Chippewas were outscored in the paint by a massive difference of 60-22. They also shot just 40 percent from the field compared to Flagler’s 56 percent average.

“I feel bad that I put our guys in a tough position to have a back-to-back game against a really good opponent that has fresh legs,” Chippewa head coach Keno Davis stated. “Yet, with this young team we have to learn on the fly. I’m hopeful that this experience, coming down here, exposed some weaknesses, but we need to try and get better quickly.” Davis is a solid coach, and he will have his team ready for MAC play.

Why All the Upsets?

There are a lot of noticeable trends in these four games. Overall, a lot of it can be attributed to sloppiness. Too many turnovers and too many missed shots create opportunities for opponents to make runs and put games out of reach. Certainly, this is no different than any other reason why teams lose to lesser opponents. That brings the discussion back to the uniqueness of the season during a pandemic.

Teams are scheduling on the fly. Practices are being missed due to shutdowns. Teams may not take the court for two weeks at a time. In the end, all of the normal preparation that would go into preparing for any opponent is not happening. Adding a team to a schedule less than 24 hours before the tip creates limited opportunities to scout. Limited practice opportunities don’t give players the reps they need to get comfortable with schemes. “Any given night” is the rallying cry for teams that are underdogs, and that’s exactly what’s happening with these mid-major basketball teams. All four of these teams may figure things out when it matters during league play. However, there’s a good chance they won’t be the only four on the losing end against a non-Division I team before season’s end.

2 thoughts on “Mid-Major Basketball: Struggles with Non-Division I Opponents”