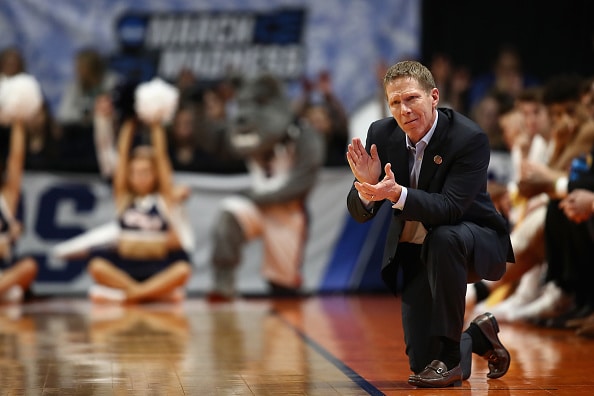 Gonzaga basketball is no secret to playing in big games. But that hasn’t always been the case, and a matchup like this is special.

For those of you who are too young to remember, Gonzaga basketgball wasn’t always this good, this talented, or ….. this good.

It took a few years but under the leadership of Dan Monson and the still-active enthusiastic Mark Few…. Gonzaga basketball is here now and forevermore.

It wasn’t always like this though. Before Gonzaga became a household name its claim to fame was being the home of one of the best point guards to walk the earth and the least noticed. His name is John Stockton. How would you compare John Stockton to Gonzaga basketball? Well…. this way. If Gonzaga was Stockton and North Carolina was Michael Jordan…. you would have a true story which actually happened like this:

In 1992 at the Olympic Games in Barcelona, Jordan was mobbed every single place he went. The same could be said for Carolina basketball with its teams of the 1990s and its famed battles with Duke.

In 1992 at the Olympic Games in Barcelona, John Stockton walked around with his family in tow and not one single person knew who he was. Not one. In 1992 do you know what people said about Gonzaga basketball? Who is Gonzaga?

I rest my case.

For many years, Gonzaga has been this Catholic oasis in the mountains of Spokane. Now it is the number one ranked school in the country and doesn’t show any signs of letting up now. Saturday, December 5 is just moments away and the Zags are about to have one of the biggest games in their history. Maybe the biggest of all time. But as history shows….. the ‘Zags love the spotlight in December. Even as they burst on to the scene in the late 1990’s you could see the building of a powerhouse in the making.

Let’s look back and take a look at some of the great games in the history of the proud Gonzaga program of late.

I think everyone remembers this game. In a game where everyone knew Duke would run over everyone with Zion Williamson and all of his extra value meal McDonalds All Americans, Gonzaga shows up with Rui Hachimura and his big 20 point game inside and a huge Gonzaga basketball victory and allows everyone to possibly dream of a matchup of these two great programs in the NCAA Tournament in March.

Twenty years ago who would have thought that these two programs would be playing for number one in the country? But twenty years ago Robert Sacre and Elias Harris walked into Dallas and let everyone know that while they may be a young .500 team, they would be a program to deal with in the future. Now twenty years later, these two programs are walking into Indianapolis getting ready to play Game of Thrones to see who is king.

In a year when Gonzaga lost Adam Morrison to the NBA, Gonzaga basketball picked right back up and with the leadership of Derek Raivio and Jeremy Pargo and defeated a Tar Heel team led by Tyler Hansborough, Brandon Wright, Bobby Frasor and Ty Lawson in Madison Square Garden. Oh yeah…. and this Carolina team ended up being a number one seed in the East Regional in the NCAA Tournament.

In this game of #22 Gonzaga vs #3 Georgia Tech, the ‘Zags came out with 24 points from Adam Morrison, Derek Raivio with 21 points, and last but not least Ronny Turiaf with 17 points and 10 rebounds. A Gonzaga team that in years ahead would be seen as one of its most talented ever.

In years previous, Gonzaga was able to show the country that their being in the NCAA Tournament was not a fluke. On this night in December, they showed the country that they were a force and not a farce to face in the regular season as well. In a game where #3 Missouri was led by Coach Quin Snyder, former Coach K assistant and great point guard of the 1980’s), Gonzaga’s freshman sensation Adam Morrison had 17 points and the ‘Zag leaders, Ronny Turiaf had 21 of his 23 points in the second half while Blake Stepp had 14 points and 10 assists as Gonzaga basketball defeated Missouri in OT in a game that Quin Snyder described as “being played at a very high level.”

Today’s game of the ‘Zags vs the Bears should also be played at a very high level. A level that could see one of these teams standing on the podium as they watch their ‘One Shining Moment” on screen.

For that, we should all tune in to watch.