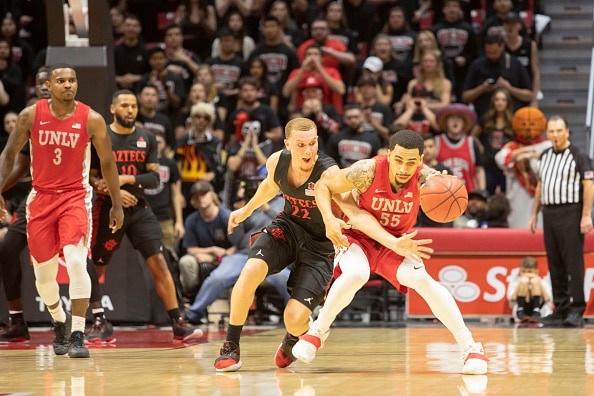 There is plenty to want to leave behind in the prior year as everyone looks forward to 2021. However, mid-major upsets are something that still found their way into the headlines during 2020. Here are the top five from the craziest calendar year college basketball may have ever had.

The Five Best Mid-Major Upsets of 2020

The COVID-19 pandemic has left plenty of teams making schedule changes on the fly. Certainly, Kansas State did not expect to have any trouble playing a team from the Division II level. However, as the trend has gone, plenty of non-Division I teams are finding success against their higher-level brethren. Fort Hays State shocked fans in the Little Apple with this victory.

The most impressive part about this win for the Tigers is that they were missing their head coach and top assistant due to COVID-19 protocols for the program. Furthermore, they played just six guys, with all of them scoring in double-figures. Fort Hays State led by as much as 21 and never really gave Kansas State a chance to breathe. This was the first win for the Tigers over the Wildcats since 1938 and the first road win for a non-Division I opponent against a power conference team since 2000. Want more salt in the wound? Fort Hays State had been winless coming into the game, with all of those losses coming to fellow Division II teams.

The abrupt end to the 2019-20 college basketball season left fans with a void. There weren’t any thrilling games or mid-major upsets to reminisce about from an NCAA Tournament that didn’t happen. Georgia State and Georgia Tech tried to make up for that with a four-overtime classic on the opening night of the 2020-21 season. To the chagrin of Yellow Jacket fans, the outcome ended up favoring their cross-town rivals.

If you like offense, you would’ve loved this one. The teams were tied at 77 after regulation, but 20 more minutes of basketball over four extra periods saw 89 more points thrown onto the board. Georgia State, for all their recent success, had never defeated an ACC team before pulling this victory off. It was also the first time the Panthers had beaten their city neighbors in 14 prior attempts. Best of all, it gave college basketball fans the kind of game they needed on the first night of the season to be happy about the ball being tipped once more.

Unfortunately for lifelong Virginia Cavalier fans, they are no stranger to mid-major upsets. First, there was losing to Division II Chaminade as the top-ranked team in the 1980s. Then, there was the loss to UMBC as the first top seed to lose to a 16 in men’s tournament history. It may be a new season, but it was the same old heartbreak in Charlottesville when the Cavs fell to San Francisco in late November.

San Francisco earned their first win over a top-five team since 1981 when the Dons were last a formidable team nationally. That is the goal for the program once again, and a win like this helps with that cause. USF knocked down 13 threes on their way to this win, testing Virginia’s perimeter defense. Furthermore, it once again brought to light the continued offensive struggles that the Cavaliers can have at times. Above all of that, let’s not forget that this was a win for San Francisco over the (still) defending national champions.

The Southern Illinois Salukis have been slept on in the Missouri Valley Conference over the past few seasons. In 2019-20, they overcame a slew of injuries to outperform their pre-season projection. This season, the Salukis are at it again, and they took down the nation’s longest home winning streak against non-conference opponents in the process. Butler had won 59 straight games against such teams at Hinkle Fieldhouse before falling to Southern Illinois a few days before Christmas.

Southern Illinois used a 26-2 run to break the game open in their favor late in the first half, including holding Butler scoreless for almost eight minutes. Even though the Bulldogs fought back, it wasn’t enough to overcome the early hole. The win gave the Salukis their best start in 17 seasons. It also added to a recent string of impressive home winning streaks getting ended with mid-major upsets. Last season, Duke fell to Stephen F. Austin and Kentucky fell to Evansville on their home courts.

There was no way this wasn’t going to be the best of the mid-major upsets of the 2020 calendar year. San Diego State was having their best season in school history and was the lone unbeaten team left. The Aztecs appeared as if they were at least going to enter the Mountain West Tournament without a blemish given the ease of their remaining regular-season schedule. Then, UNLV came to town.

Ironically, San Diego State raised their conference regular-season championship banner before the game. However, the Rebels rained on that parade on their way to their highest-ranked road win since 1991. We’ll never know just how far the Aztecs could’ve gone in the NCAA Tournament, or whether their last-second loss to Utah State in the Mountain West Tournament Final would’ve cost them a one-seed. However, what we do know is that UNLV’s ending of San Diego State’s perfect season was the best mid-major upset of 2020.