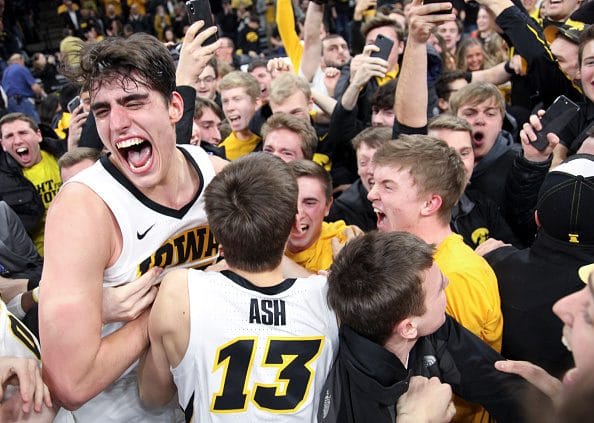 Over the next three weeks, our team at CBB Review will get you ready for this unusual season with conference previews, continuing with Big Ten Basketball. With superstars like Luka Garza and Ayo Dosunmu for Iowa and Illinois, returning, Indiana snagging a top 30 recruit, and Wisconsin bringing back a lot of their team that won the Big Ten last year, the conference is completely up for grabs.

Below are the predictions for the final standings, awards, and outlooks for each team in the Big Ten. Brace yourself, it will be a wild year of college basketball, just what every fan has been waiting for.

The only thing for sure in Big Ten Basketball is who the bottom two teams will be. Nebraska brings in a solid transfer in Kobe Webster, but the returning players are not going to make enough of an impact to win games. Nebraska has to hope that coach Fred Hoiberg has enough in him to lead this team to a few victories.

After losing their best player in Lamar Stevens (graduated) and Head Coach Pat Chambers (stepped down), this team is looking a little concerning. They do return Myreon Jones, who was a key player for them last year, but without a strong recruiting class and no good transfers, it’s no surprise to see them down here.

It’s very rare that we see a team go from top to bottom in a conference, but after losing Anthony Cowan and Jalen Smith, Maryland finds themselves in the 11 spot. They are still bringing back some talented players in Eric Ayala, Darryl Morsell, and Aaron Wiggins, who will all need to fill the roles of Cowan and Smith. What they won’t be getting is freshman help, with the worst recruiting class in the Big Ten, so they will rely on the their veteran players. It seems like Mark Turgeon is on the hot seat every season, but this might be the season they finally pull the plug.

Minnesota loses one of the best players in the conference in Daniel Oturu, but they do bring back key players in Marcus Carr and Gabe Kalscheur. They also bring in three transfers, all who can potentially start, with the most prized being Both Gach from Utah. If Carr can bump his scoring average from 15 PPG to 18, the three transfers can all score 8-10 points and incoming freshmen and son of former NBA player Jamal Mashburn Jr. can be an impact off the bench Minnesota could do much better than 10th. Don’t be surprised if they’re seen as a tournament team in March.

I am a lot lower on Purdue than every other site has them. They are returning a ton of key players including Trevion Williams, had a big jump sophomore year and will probably take another jump this year. They also bring in two Top 100 recruits in Jaden Ivey and Ethan Morton who will probably both get good minutes off the bench. Purdue finished 11th in the conference last season, and the only reason I have them this low is because every team ahead of them that finished ahead of them last season besides Maryland and Penn State either got better or are stayed the same, which is enough to put them ahead of Purdue. With this being said, they could easily prove this to be wrong and even finish as a Top 25 team next season.

Michigan loses two of their stars and heart and souls of the team in Zavier Simpson and Jon Teske. Luckily, they return three other very talented players in Eli Brooks, Franz Wagner, and Isaiah Livers. Combine that with the best recruiting class in the Big 10 plus key transfers, and Michigan is looking good for next season. One key player to watch for is Hunter Dickinson a 7’2 giant who can control a game at his full potential. The biggest question for them is who can be the team leader and ball-handler after no returning players averaged over 2.0 assists per game.

Losing the Wesson twins is a massive blow for Ohio State, but they have the pieces to make up for it. Duane Washington is their best returning player and will be one of their main guys this season, but their biggest move is having Harvard grad transfer Seth Towns commit to Ohio State. Towns averaged 16 points a game last season, some much needed scoring Ohio State will use. Add another transfer in Justice Sueing and Ohio State should compete in the Big Ten next season.

The most surprising stat in the Big Ten was that they only received ONE five-star recruit for next season. That recruit, Khristian Lander who picked Indiana. The hometown favorite should be starting by the end of the season and may be good enough to make an All-Big Ten team. Put him next to Trayce Jackson-Davis, a former high four-star and this young duo will be a force to reckon with next season. Indiana finished 20-12 last season, and this year they’re even better so watch out for the Hoosiers.

Geo Baker and Ron Harper Jr. return and look to continue to turn this program around. Baker became quite the fan favorite last season after hitting countless big shots, and will being doing the same this season. Rutgers’ big splash was getting Top 50 recruit Cliff Omoruyi, a center who will be a much needed spark off the bench and someone who looks like he can help out right away. In a super tight Big Ten, Rutgers can finish anywhere between 4th and 10th, but expect it to be closer to the former.

The Spartans are really going to miss their two time All-American point guard Cassius Winston who graduated this past season. Luckily, they do bring back a few of their top players including Rocket Watts, Josh Langford, and Aaron Henry. The player to watch for Michigan State next season is Joey Hauser. At Marquette, he was a great stretch big, and after sitting out a season, he will look to continue to be a main scoring option. If Mady Sissoko, a top 40 recruit can pass expectations, Michigan State has a real shot at winning the conference, especially with a hall of famer in Tom Izzo coaching them.

Iowa fans breathed a sigh of relief when player of the year runner up last year and favorite for this year Luka Garza announced he was returning for his senior season. Garza alone can win the Big 10 title and have Iowa as a top 10 team in the nation. They also return Joe Wieskamp, one of the top shooters in the country, and Jordan Bohannon will be healthy again after only 10 games last season. The main question with Iowa is, how much better did they get? With an 11-9 conference record last season, they are sure to be better, but without any major transfers or recruits it is unsure if they have enough to win the conference. With that being said, all you need is Luka Garza and that automatically makes them a top 3 team.

Wisconsin surprised a lot of people when they actually won the conference last season, and a big reason for that was chemistry. They don’t have a star player like Iowa, Indiana, or Illinois, but they have a lot of guys who can score. The X factor is Micah Potter, who completely turned this team’s season around when he was put in the starting lineup last season. Wisconsin is projected to start an all-senior lineup, and as we’ve seen most years, teams with more experience usually go farther. With no key losses, and all their players adding a year of experience, Wisconsin is a lock for top 3 in the conference next season.

There isn’t a team that had a better offseason than Illinois. With Ayo Dosunmu and Kofi Cockburn looking like they were on their way to the draft, and Andrez Feliz (graduated) and Alan Griffin (transfer) both leaving, Illinois looked like they were in trouble. Then, Dosunmu announced he was returning next season followed by Cockburn. This took them from arguably 12th in the conference to first. Dosunmu is the best guard in the Big Ten and maybe even the country, so having him back as a leader on the court. Cockburn nearly averaged a double-double as a freshman last season, and this year he could easily average 15 points and 10 rebounds. Add two great recruits in Adam Miller and Andre Curbelo, and the Illini could find themselves as a top 10 team in the country next season and eventual national champs.