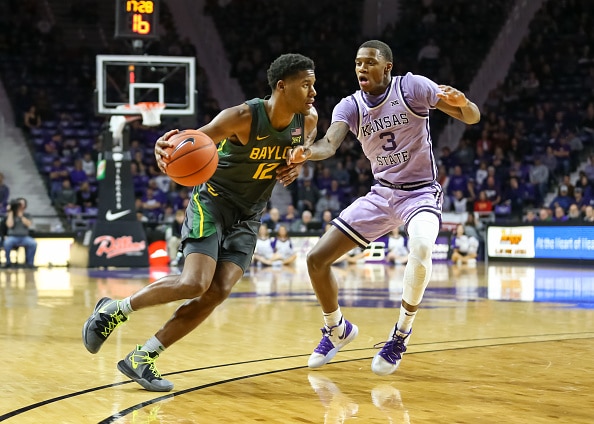 After having two top 5 teams last season, the Big 12 looks to, and can repeat.

Over the next three weeks, our team at CBB Review will get you ready for this unusual season with conference previews, continuing with Big 12 Basketball. With potential All-Americans in Jared Butler and Marcus Garrett returning, the top recruit in the country trying to lead his team to a conference title, and elite coaches in Bill Self, Chris Beard, Bob Huggins, and Scott Drew battling it out, it’s impossible to know who will win such a great conference.

Below are the predictions for the final standings, awards, and outlooks for each team in the Big 12. Brace yourself, it will be a wild year of college basketball, just what every fan has been waiting for.

Just two years after winning the Big 12 regular-season title, Kansas State find themselves at the bottom once again. They were pretty bad last year, with a 3-15 conference record, then they lost their top three scorers this offseason. Now, they look to try to win games with their highest-scoring returning player averaging 7 PPG. Mike McGuirl has shown signs of being a good player, and if Nijel Pack can outplay his potential then Kansas State can finish 9th in the conference. Keep your heads up K-State fans, Weber always finds a way to get you back to the top, it just may not be this season.

Losing future top 10 pick Tyrese Haliburton to the draft is hard but expected, and they will need to find a way to play without his presence. He did miss a lot of games at the end of the season, and Iowa State finished the season with a 1-6 record in their final 7. Rasir Bolton is their best returning player, and after averaging 14.7 PPG last season he can easily make an All-Conference team this season. Jalen Coleman-Lands was a huge transfer to get after a good stint at Depaul, giving Iowa State that extra scoring boost and he’ll be able to keep them in games. The X-Factor for the Cyclones is freshman Xavier Foster, a top 80 recruit who at 7’0 could be a key player to grab rebounds and be a presence in the paint. While this might not be Iowa State’s season, we all know they’re going to compete as long as Steve Frohm is their head coach.

No team is impacting more by a player leaving than TCU with Desmond Bane. Bane was a Big 12 First team all-conference player last year and is seen by many to be the biggest steal in the draft, a player that TCU could really need. Now, they will look to be led by RJ Nembhard and Kevin Samuel. Nembhard is coming off a 12 PPG season and has gotten better every season. Kevin Samuel also had a better season and could be a double double threat, and his 2.7 blocks per game will also be a big help. One player to keep an eye on is Terren Frank. The freshman isn’t very highly ranked and won’t start right away, but he did start for Sierra Canyon, arguably the best high school in the country, and had the experience of playing with some of the top players including two top 10 recruits in BJ Boston and Ziare Williams, and of course Bronny James. TCU have no seniors, so this will be a great season for the team to develop and come back next year with an even better team.

Oklahoma surprised a lot of people last year with a 4th place finish in the conference, but a big reason for that was their star player Kristian Doolittle, who has now graduated. The talent is still definitely there though, with three of their top 4 leading scorers returning. This includes two seniors in Austin Reaves and Brady Manek, who both feel like they’ve been at Oklahoma for 7 years but have been so good for them every season. De’vion Harmon had a really solid freshmen year and will take a huge jump this season, potentially making him the best player on the team. The freshman class is lacking, which is the main reason why they’re ranked where they are, but Lon Kruger always finds a way to win, so seeing Oklahoma higher wouldn’t be such a surprise.

Cade Cunningham, the top recruit in the nation according to 247Sports, finds himself in Stillwater for the season. He alone can win games for the team and is probably going to be one of the best players in Oklahoma State history. The player to really watch though is Isaac Likekele, who had a huge sophomore jump and could find his way onto the All-Conference second team with another good season. The rest of the team after those two is pretty bad but sometimes you only need one or two players to compete. Oklahoma State doesn’t have anything to play for, as they are banned from this season’s tournament, but that doesn’t mean they won’t try.

The top 5 in the conference are all incredible, with each team having potential to finish the season top 10. Texas is a really good team who can no doubt win the conference, they just got unlucky with the 4 teams ahead of them being so good. Everyone from last year returns after a red hot finish to the season which they won 5 of their final 6 and looked like they were finally clicking. Matt Coleman is one of the most underrated players in the country and is a true leader on the court, and will be complemented greatly by Courtney Ramey, Andrew Jones, and Jericho Sims. Off the bench, they have an elite 6th man in Jase Febres who can hit a big shot and looks to be fully healthy after dealing with injury towards the end of the season. Oh yeah, they also have a top 10 recruit in Greg Brown, who gives that much needed boost in the paint and will work perfectly with the rest of the starters. Texas might be a good coach away from winning the conference, and if everyone can stay healthy this team could be dancing in April.

Chris Beard got some great news this month when the NCAA cleared Mac Mcclung to play this season. Everyone knows him for his flashy dunks, but he was also a great scorer at Georgetown last season, averaging 16 PPG. He will be joined by two other transfers in Joel Ntambwe and Marcus Santos-Silva, who both averaged double digit scoring and will provide a much needed boost. Kyler Edwards is their best returning player and Terrence Shannon Jr. showed signs of being a star last season. With all that, they bring in the top recruiting class in the Big 12. Nimari Burnett and Micah Peavy are both top 50 recruits, and both are seen as great fits into Coach Beard’s system. Around conference play time, they will have enough experience to really take over games and lead them to big conference wins. Texas Tech could be a top 7 team this season and still finish 4th, that’s just how good the conference is.

Oscar Tshiebwe returning might only rival Luka Garza and Ayo Dosunmu for the biggest returning players for next season. Tshiebwe is going to average 15 and 11 this season and could be an All-American. Derek Culver will join him in the frontcourt, making it almost a lock that West Virginia will get two possessions on offense every time. Miles McBride is a solid guard and Jordan McCabe had flashes of being great, he just needs to become more consistent. Isaiah Cottrell is a top 80 recruit at power forward who probably wasn’t expecting Tshiebwe to return, but this year will be a great way to develop. Bob Huggins always knows how to lead his team to success, and the defense is going to be as good as always, so look out for this West Virginia team.

Losing two All-Americans in Devon Dotson and Udoka Azubuike is never easy, but the Jayhawks find themselves at the top once again. A big reason for that is Marcus Garrett, the defensive player of the year last season who has started to develop a scoring presence as well. He single handedly changed the momentum of some games with his defense and will do the same again this season. What makes this team interesting though is the amount of boom or bust players they have. Ochai Agbaji looked great his freshman year, but struggled last year, same as David Mccormack. Kansas will be seeing two new additions to the team get big minutes in Bryce Thompson and Tyon Grant-Foster. Thompson is a top 20 recruit who Bill Self loves and will be the scoring boost this team will need. Grant-Foster is one of the best transfers and many people see him as an All-Conference second or third team player. If all their players show the improvement that’s expected, they could be the best team in the country like last season, an impressive feat for a team losing their two best players.

Unlike Kansas, Baylor brings back their stars from a team that was the best in the country for most of the season. Jared Butler is a projected first or second team All-American, MaCio Teague is a great all around guard, and Davion Mitchell showed lots of improvement this past season. In addition to that, they have Mark Vital, who was a contender for defensive player of the year and very easily could win this year. If all goes to plan, Baylor will be a top 1-3 team in the country most of the season and should be able to make the final 4.