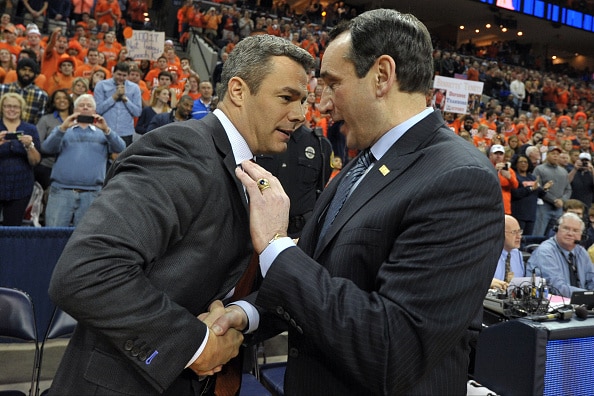 ACC basketball looks to improve from top to bottom this season. We preview the conference’s teams and top players.

Over the next three weeks, our team at CBB Review will get you ready for this unusual season with conference previews, starting with college hoop’s premier conference: the ACC. With eligible transfers, players opting out, and overall chaos, with the addition of how crazy 2020 is in general, it is safe to say the ACC could very well have a down year. But given history and the strength of the coaches and players, the conference is slated for another year of dominance.

Below are the predictions for the final standings, awards, and outlooks for each team in the ACC. Brace yourself, it will be a wild year of college basketball, just what every fan has been waiting for.

Steve Forbes is taking over Danny Manning’s squad in which he inherits no players who averaged more than 10 points per contest last year for the Demon Deacons. Daivien Williamson and Ian DuBose both averaged double-digit points over their careers in mid-majors, but the ACC is another best. Wake Forest will struggle this season, and it is very possible it goes without a win in conference.

Georgia Tech returns two top scorers in Michael Devoe and Jose Alvarado, which is huge for the Yellow Jackets. However, the two top scorers only shot 38% from beyond the arc last season. In a three-point reliant league, it is imperative for top dogs to be efficient from the field. In no way is 38% a bad figure, but it cannot lead a subpar shooting team to win in a three-point era.

Jim Christian’s job could very well be on the line this season with a BC team that has a high ceiling and low floor. Boston College loses two key pieces in Derryck Thornton and Nik Popovic, but does have key transfers that can contribute immediately. Last season, BC players combined for 67 missed games, more than any other team in the conference. With very little depth, excluding transfers who did well at their previous schools, one key injury could be the difference between being on and off the bubble for Boston College.

In a league with elite coaching, it is starting to become clear that Jeff Capel was highly sought after not because of his talent, but rather the fact that he was a part of Coach K’s staff. In two years, Pitt has made little progress and Capel has been very disappointing in Pitt. However, there is a bright light for Panther fans, as last year’s two top scorers in Xavier Johnson and Justin Champagnie are back in action. Xavier Johnson is the difference-maker for this squad, as he is a dynamic playmaker who can win games late.

Aamir Sims is an ACC basketball first-team contender this year, but Clemson may be a tournament pretender. Sims and John Newman III are the only two players with serious experience, which can prove detrimental late in the season, especially during the postseason. Clemson also dealt with plenty of injuries last season, bringing to question how players will hold up during this crazy season. The Tigers are similar to BC in that they are always an upset threat but have a very low floor. Brad Brownell is a slightly better coach than Jim Christian, giving Clemson a slight edge. But if Sims does not continue to break out and take over his team, Clemson could easily fall to the bottom tier of the league.

It’s starting to look like Jim Boeheim’s best teams are in his past. Syracuse just cannot shoot the three-ball well enough to be a legit contender in this league. Sure, with the deadly zone and high recruits, the Orange is always a scare, but they simply do not produce enough offense to compete against teams like Duke and UNC. The Orange shot 32% from three a year ago and were outrebounded by their opponents on average. Second chance points win games, and Syracuse needs to rebound better to break through and become a powerhouse in this league. The bright spot for Syracuse is Joe Girard III, who had a solid season for the Orange last season. Girard is poised to break out, as he was a dynamic scorer in high school and is a natural playmaker.

Miami always struggles on defense, and the past few years, the offense has looked poor as well. However, Chris Lykes is back for his senior season, Earl Timberlake is a top 100 recruit, and Nysier Brooks brings immediate help from Cincinnati. However, none of these names are the key to success for Miami. Isaiah Wong, a sophomore, averaged over 14 points per game in the Hurricane’s final 15 games, in which he averaged over 30 minutes per game. Wong will see similar minutes this season, and if his production remains or improves on what it was at the end of the 2020 season, Miami will be a matchup nightmare for opposing teams.

John Mooney, TJ Gibbs, and Rex Pflueger are all gone, but Prentiss Hubb and Dane Goodwin are back and ready to run the show for the Irish. Mike Brey constantly deals with obstacles at ND, and losing starters is nothing he has not had to deal with. Brey is a top coach in the ACC, which is reason alone to contend. But with two returning players who averaged double figures last season, Brey’s squad has a real potential to be an above average team in this elite league.

Carter Diarra is a key get for the Hookies, as they embark on a second straight season in which they lost immense talent to the transfer portal. Mike Young proved he could coach with the best of them last season, as he brought a mediocre team to contend as much as possible. His style of play is different from that of Buzz Williams, but the more time the players have to adapt, the better they will perform. Virginia Tech will be more dangerous as the season progresses, and can make a push in the ACC.

Devin Daniels, Braxton Beverly, and DJ Funderburk are all back. Senior leadership is hard to come by in the one-and-done era, and three seniors who averaged double figures in their junior seasons are almost unheard of. Kevin Keatts has been better and better as the head coach, and the defense is slowly improving. NC State has an extremely high ceiling this year.

FSU lost immense talent after their first-place finish last year, but Leonard Hamilton is poised to bring his team back to the top of the league for the second straight year. MJ Walker is back, and Scottie Barns can win FOTY. Hamilton knows how to win. He will do just that this year as Florida State looks to compete yet again in a tough ACC basketball conference.

Coming off a historically bad year, UNC is ready to reinstate itself as a powerhouse in the ACC. Garrison Brooks is a top player in the league, and Caleb Love and Walker Kessler are a dynamic freshman duo. Alongside key role players like Leaky Black and Armando Bacot, UNC has the pieces to return to the top of the league. And Roy Williams hates losing more than anything, so it is safe to assume he will do whatever it takes to return to form this season.

Jordan Nwora was a key part of Louisville last season, but is it possible he was holding the Cardinals back? Probably not, but it is not crazy to think that taking a high volume shooter out of the rotation could benefit glue guys like Malik Williams and Samuell Williamson. David Johnson is a first-team contender at guard. Chris Mack is a star, and he knows how to win. With an elite offensive and defensive scheme, whatever pieces Mack works with, he will succeed.

Duke is going through its yearly cycle of players. Last season was Vernon Carey, Cassius Stanley, and Tre Jones, who all left for the NBA Draft. Now, Jalen Johnson, Jeremy Roach, and DJ Steward lead the charge for Duke’s always elite freshman class. More importantly, Matthew Hurt and Wendell Moore are back. Experience has always helped Duke, despite being rare. Matthew Hurt has more talent than Grayson Allen did, but can he develop Allen’s leadership skills without acquiring the temper? If so, Coach K has a whole other element to his roster that can bring them all the way to the National Championship.

Tony Bennett took a rebuilding team last year and became serious ACC contenders. With the additions of Sam Hauser and Jabri Abdur-Rahim, Virginia is in contention to make the Final Four. Kihei Clark is back for his junior year, and Jay Huff is only beginning to scratch the surface of his potential. With an always elite defense paired with possibly the best offensive team in Tony Bennett’s tenure besides the 2019 championship team, Virginia is poised to stay at the top of the league this season.