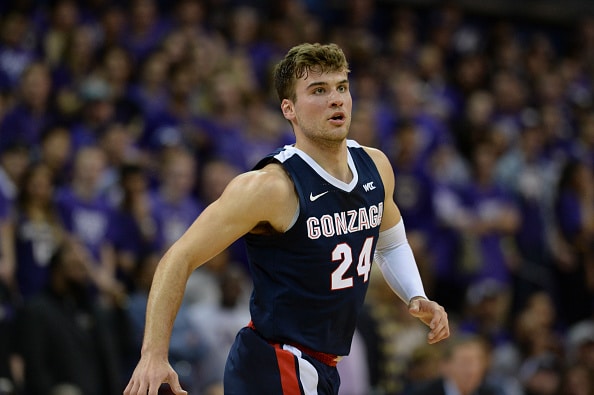 Playing pick-up basketball is one of the most fun activities out there. You and your friends head over to the nearest outdoor court or gym and see who you can challenge. Your three versus anyone else’s best three. Anything inside the three-point line is worth one point, and anything behind it is worth two. Now, let’s imagine NCAA President Mark Emmert mandates the game can only be played in a three on three format. The college game changes drastically. Or does it? A team’s best players are still a team’s best players. The following list is composed of some of the best trios out there if three on three was a reality. These are not rankings, and there are plenty of other competitive trios out there. However, these stood out the most.

Let’s start with arguably the best team in the country heading into 2020-21. There are a number of different directions you could take with the roster Mark Few has this season. Incoming five-star recruit Jalen Suggs could certainly have chosen. However, the three chosen will have the most impact on the team as they search for their first national title. Kispert would be the scorer here, as he averaged 13.9 points per game last season and is a career 39.3 percent three-point shooter. Meanwhile, Ayayi would facilitate the offense while also being able to find his shot when needed. Finally, Timme flashed his potential last season and is poised to step into Filip Petrusev’s place in the paint. These three could go toe-to-toe with anyone.

It may not feel like it, but Virginia is still the reigning national champions. Tony Bennett has created a defensive monster with the Cavaliers, and they have only gotten stronger with the addition of Sam Hauser. Clark and Huff were both part of the 2019 title team. Clark does a little bit of everything, and can stroke it from beyond the arc as needed. Furthermore, he is not afraid to get scrappy in the paint for rebounds, regardless of his size. Huff has improved each season of his career and is capable of a double-double in his senior season. The icing on the cake is the addition of Hauser, who is a preseason favorite for the ACC Player of the Year. He averaged 12.7 points and six rebounds per game while also shooting a lethal 44.5 percent from the three-point line in his career at Marquette. Good luck defending the perimeter while also accounting for Huff down low.

We always know there is that one group that claims they can compete with just a bunch of guards. However, Baylor has a trio in the backcourt who could. It starts with Butler, who may be the best guard in the entire country. He was the Bears’ leading scorer last season at 16 points per game. However, he can also dish the ball and get others involved, all while spotting up from deep. He is joined by a pair of former transfers who made an immediate impact last season. Mitchell can run the point, allowing Butler to really tap into his scoring ability. Meanwhile, Teague is the most likely of the three to grind it out in the paint. This group could work inside-out through him. Pick your poison on defense.

Mid-major programs are often built on a small group of standout players who are supported by serviceable depth. Richmond fits that bill heading into the season, and it’s why they’re one of the trendy picks to be Cinderella by March. Gilyard is the facilitator, as he averaged five assists per game last season. However, he is arguably more impactful on defense. He is the reigning Defensive Player of the Year in the Atlantic 10 after averaging almost three steals per game in 2019-20. Francis is the go-to scorer here after averaging 17 points per game last season. He is most dangerous when he gets hot from the three-point stripe. Spider fans are just hoping he can stay healthy. In the post, Grant Golden holds things down. During his time as a starter for Chris Mooney, he has averaged close to 15 points and seven rebounds per game. These three have what it takes to go up against some of the best trios in the nation.

It feels like beating a dead horse, but Jay Wright is known for getting guys to commit to his program and improve each year. That is what Wildcat fans are hoping for from Robinson-Earl and Moore while Gillespie etches himself as the next great guard in this system. Gillespie has a future in the NBA, and is looking to improve upon an already impressive junior campaign that saw him average 15.1 points, 4.5 assists, and 3.7 rebounds per game. Robinson-Earl is set to achieve the double-double average he was close to having as a freshman. Meanwhile, Moore will improve in his own right, and would serve as the three-point sharpshooter after averaging a little over 39 percent in 2019-20. Good luck containing this trio.

Few teams breathed a sigh of relief with the return of players from the NBA Draft process than LSU. Smart, Watford, and Days all withdrew their names, and the Tigers immediately became one of the favorites in the SEC. Smart runs the point and makes this offense go. He averaged 3.2 assists per game, but also found his shot as needed with 11.7 points per game last season. Watford and Days do most of their damage inside. Watford averaged 13.6 points and 7.2 rebounds per game as a freshman, and should only improve in year two. He will especially need to improve on the defensive end. Meanwhile, Days had similar numbers to Watford, averaging 11.1 points and 6.8 rebounds per game. Other teams would have to decide to defend one or the other inside while not forgetting to account for Smart on the perimeter.

San Diego State lost some of the talent that made them a legitimate contender last season, most notably Malachi Flynn. However, the Aztecs will still be dangerous, and that is largely thanks to this trio. Gomez stayed in California for his graduate year, and will look to attain similar numbers that he put up while at Cal State Northridge, most notably 20 points per game and shooting a blistering 45 percent from three. Schakel embraced his starting role last season and will now be expected to shine even brighter this season. He is another three-point threat, averaging 41 percent for his career. Inside, Matt Mitchell is the guy. He averaged a little over 12 points and a little under five rebounds per game last season. He has the ability to work on the wing while also working on the block. SDSU will go as far as these three can take them.